The Fire of Her Eyes

When werewolf Katya captures blind weretiger Yun alone in the wilderness, she sees only a means of escaping the human poachers that hunt her pack. An opportunity to finally end the raging conflict between Katya's wolf pack and the surrounding tiger clans is just a much-appreciated perk. After losing many werewolves to a poaching raid, the last thing the pack needs is trouble. Tensions run high as Katya tries to maintain control as the new Alpha and stand by her decision to spare Yun.

Yun remains loyal to the tigers, though, and as time passes, Katya finds herself less and less inclined to force information from her that might help the pack. But when the fight comes to them, both will see their loyalties tested in the crucible of battle, and Yun will have to decide where she belongs: with the tiger clan, or with Katya and the wolves. 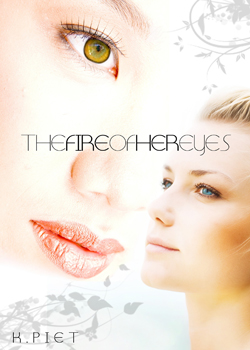 The Fire of Her Eyes

Katya looked behind her, checking on every member of the pack before nodding her satisfaction. They'd made excellent time, even with the snow. It seemed fear and adrenaline were on their side, keeping even the younger ones focused on their destination. She'd sent her two scouts ahead to make sure the path to the outcropping in the mountainside was clear.

It was only when they neared the final bend that she heard the grunts and growls of a struggle, and it sent her rigid with fear. She held up her hand, stopping the pack behind her, and a glance around the bend made her bite back a curse. "Tiger," she breathed to the waiting group as she hurried back and handed her pack off. "Mikhail, keep them back. It's alone, but watch for others. If the clan's close behind, you'll have to make a run for it down past the river. Dmitri, you're with me."

She growled softly, moving with as much speed as stealth allowed. The snow had dulled her senses. She should have heard the struggle sooner. Rounding the bend and moving just a fraction down the mountainside, she peeked over a convenient boulder with Dmitri.

The weretiger was female; Katya could tell that much from a distance. Her eyes widened when she watched one of her scouts take a kick directly to the throat. Her pulse skyrocketed at the sight of the weretiger blocking and dodging each of the other scout's attacks, the first man still struggling for breath in a heap of snow and gravel.

A nod to Dmitri, and they sped to the scout's aid. Before they could even reach the fighting pair, the girl tensed and deepened her stance. Katya growled as Dmitri lashed out at the tigress and was thrown off balance, his own momentum used against him. The tigress was still recovering when Katya lunged forward. Her nails barely grazed the dark-haired woman's cheek, blocked by little more than a reflex.

Katya ducked a kick, blocked a strike, and circled as she took a breath. Damn, but the woman was fast. Feline grace or some such nonsense. It just made her fists tighten with anger, and her growl was louder when she rejoined the fight, watching as Dmitri proved too slow to counter with his bulky frame. A well-aimed punch and the large man was down. Katya's pale hair swirled in the wind as her hood fell back, and she blocked and dodged strikes aimed for her torso.

The tigress' dark hair fell into her face as she swirled to block both the scouts' advances. There it was, a gaping hole in the woman's defenses. Katya darted in and grabbed the woman's arm as it reared back for balance. The screech of pain that sounded from the woman nearly made Katya's grip falter, but she held on tightly, taking advantage of whatever pain she had caused. It seemed to disable the woman, who lashed out wildly but without any apparent aim.

"Grab her!" she yelled to the scouts, who swiftly complied, tackling the woman to the snowy gravel, her calves pinned to the ground beneath their knees and her arms held back. The tigress struggled and cried out in panic and pain, but looked up at Katya with wide eyes. There was something off in the pale yellow eyes, a color she had never seen in an unshifted weretiger.

"How many of you are there?" Katya growled, and when the dark-haired woman renewed her struggles, she reached down and squeezed her captive's forearm until her head thrashed back and forth.

"None!" the woman yelped, panting hard, tears slipping from her eyes. "None. Just me. I swear it!" Her limbs trembled, as she struggled again, but more to pull back from the pain than to truly escape, or so it seemed to Katya. "Please..."

Katya released her arm and exhaled slowly. "Just you? A lone weretiger without a clan?" It was out of the ordinary, but not unheard of. The true tigers in the forest were all solitary, so why not this weretiger? It made just enough sense to be plausible.

The tigress began trembling again as Katya shifted to crouch in front of her, just out of reach. "I swear it! I was cast out when my sister was killed by poachers." She opened panicked eyes to gaze up at Katya again... except Katya had crouched down.

Katya's heart skipped a beat, and her scowl twitched. Slowly, without making a sound, she raised one hand and waved it back and forth in front of the tigress' face. The girl didn't even flinch, her gaze only moving when Dmitri finally recovered and stumbled forward in the gravel, drawing attention to himself.

Pressure built up in Katya's chest, working its way up toward her throat. She tried to choke it back, to stop her lips from twitching upward, but it was useless. She burst out laughing, startling everyone in the group as she sat back on her heels, cradling her forehead with one hand. Relief was a welcome warmth through her core as her chuckles died down, and she stood, uncaring of the questioning glances cast her way.

"Mitya," she called, using Dmitri's pet-name and clapping him on the shoulder when he stepped close enough. "I hate to break this to you, but you just got the shit kicked out of you by a blind weretiger with a broken arm."

Dmitri's wide eyes soon narrowed on the tigress, and he growled loudly, "We should just kill her. Get it over with."

"Oh, you'd like that," Katya snorted, watching the tigress cringe away from blows she must have been anticipating, knowing she wouldn't be able to block them. Her smile faded just a bit as the smallest wave of sympathy wormed its way through her. "But you're not Alpha here, Dmitri."

Dmitri grumbled, but obediently bowed his head submissively along with the scouts. She let out a long, measured exhale, pulling her hood back up over her head when a gust of wind sent one side of her face tingling. "You, girl. How did you find this shelter if you can't see?"

"The same way I just broke your beta's nose," the woman retorted.

Katya smirked. She would be just as indignant if she were treated like a defenseless creature when she was anything but. "Who struck first?" she demanded, her eyes flashing between the two scouts, who shared a glance and stumbled over their words. "That's what I thought. Release her."

"But, Alpha!" Dmitri protested, but he froze in place, not daring to step forward as Katya's blue eyes bored into him.

"I said release her. She was seeking shelter from the storm, just like us. You attacked; she defended herself." Yes, she might have been oversimplifying there, but it was the sharp reply needed to make her scouts loosen their holds. The tigress didn't lash out at them. Instead, she simply cradled her injured arm to her chest and stayed in one place. "Did whoever taught you to fight also teach you to heal, girl?"

That startling, golden gaze turned to her through black strands of hair. Katya watched the woman's throat work to swallow, and the tigress nodded. "I was taught to tend wounds, yes. My skill isn't perfect."

The last sounded like a bit of a warning, and Katya caught the clenching of the woman's hand around her wounded arm. If she wasn't able to heal her own broken bones fully, then she wouldn't be able to heal others that much. So much for the myths about weretigers having skills to heal all wounds.

"In exchange for shelter in our hideaway and a hot meal, will you heal the damage you caused my men?" she asked, not bothering to point out that their 'hideaway' was actually quite deep in tiger territory. Let the tigress figure that out on her own or not. Either way, they outnumbered her.

"Alpha! You can't possibly trust this tiger to—"

"I accept!" the tigress yelled over the protests of the werewolves, effectively silencing them. "I swear to do no more harm, provided I am not forced to defend myself. I will heal what I can. If I break my word, your enforcers may kill me."

Katya nodded, and then realized the girl couldn't see it. "Very well. Ivan, Sergei, go fetch the rest of the pack. Dmitri, start a fire, cool off, and then we'll take care of your nose."

The men went about their business—albeit grudgingly in Dmitri's case—and she smiled when she noticed the small twitches and movements of the weretiger's head. The girl was aware of them all, sight be damned. She reached out slowly and touched the hand that curled protectively around the woman's injured arm. A soft, startled sound left the woman's throat, but even though she twitched with surprise, she seemed to sense that Katya meant no harm and loosened her grip. Katya took hold of her wrist and pulled a little, offering to help the woman up to her feet. "What's your name, girl?"

Mark Me (MM)
Shawn Bailey
In Shelf
$4.50
Tweets by
sirenbookstrand