NOTE: This title was previously published as Handle With Dare.

All Marlene Robeson wanted was the happily ever after and the ride into the sunset. Now divorced with few romantic prospects, all she has is a stool at Dareville's most popular bar and a chip on her shoulder. While friends party on with their significant others, Marlene sulks.

Jeff, the handsome young bartender, is willing to lend a sympathetic ear...and two arms, and much more. Marlene doesn't consider herself a "cougar," yet one look at Jeff's lean body has her ready to test her claws.

The Dareville series by Leigh Ellwood may be read out of order, but if you wish to follow the entire series here is how they are ordered: 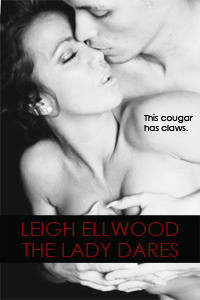 “Why have we stopped?” she asked him. She had followed his lead, and paused outside a dark red door on the other side of the block from Mick’s. Marlene glanced at the buildings on this street and recognized that many had been converted into residential lofts.

“I live here.” Jeff pointed a thumb upward, and Marlene caught sight of an open balcony holding two beach chairs. “Would you like to come up?”

“To meet your mother?” Marlene arched a brow.

“She doesn’t live with me,” Jeff said. “I moved here to help her, not live with her. That wouldn’t help either of us, trust me.”

Marlene found that too amusing not to laugh, and she swayed in place. Sobriety, she estimated, had about five more minutes until arrival. Any decision she made now needed to be considered with caution. “Look, Jeff,” she said, “I don’t know what you’re game is…”

“No games, Marlene. Just a good time. Or, I’m hoping, a great one.” Jeff stepped backward onto the raised step leading to the door. Casually hooking one hand into his front pants pocket, he lifted his coffee with the other for a slow, thoughtful sip. His gaze never left her.

She spied a trash can near the stoop and pitched hers. “You sure you’re not the one drinking too much tonight, to hit on a pathetic old lady?” Pathetic and assumingly willing, she wanted to add. True, the sight of Jeff and his tanned, corded arms could set any woman’s desires into overdrive. She may have hurdled past fifty, but death hadn’t come calling yet. A handsome blond such as this could have strolled right into Jake and Lauren’s party and relieved them of any of the female guests.

“I don’t see any old ladies here,” Jeff said with a straight face. “Just one very attractive woman who is welcome to a grand tour of my humble digs.”

Marlene scoffed. She pictured bare space, containing just a futon that served as bed and couch, and a tricked out game console and flatscreen TV in lieu of anything remotely resembling a book. That, however, didn’t bother her as much as her other thoughts.

“I suppose you think I’m one of those man-hungry ‘cougars’ like on TV,” she accused, folding her arms. “Ready to pounce when the moment calls for it.”

“Are you?” Jeff’s grin widened. “I wouldn’t mind if not. I love a challenge.”

Marlene sighed. “I don’t need your pity, either.”

“I didn’t offer it.” Jeff turned serious again and moved closer. “Marlene, when you walked into the bar tonight I waited, thinking you were there to meet some hot date. It floored me to think you’d come to drink alone, and I wondered to myself how such a beautiful woman could have nothing else better to do, or somebody to do it with.”

She shivered, despite the comfortable air. Jeff’s proximity blocked a nearby streetlight, which created a golden corona around his body. Up close, Marlene could better note the lean, hard planes of his chest and the warmth of his skin as he brought his large hands to her shoulders and smoothed them down her arms.

“I don’t know what transpired between you and your husband to cause him to leave, and I’m sorry things didn’t work out with you and Jake. Actually, I’m not, otherwise I wouldn’t have this opportunity.” Jeff lowered toward Marlene and she instinctively closed her eyes to his light dusting of a kiss across her lips. A gentle movement, it nonetheless sparked a fire Marlene hadn’t felt in a long time. Her insides liquefied, turning molten and bubbling low in her belly. Underneath the thin fabric of her bra, her nipples hardened into pebbles and itched. They scraped against the nylon, and the pain seemed intensified.

Jeff dared a hand on her lower back, bringing her close so that their bodies touched. One more inch and her heart would pound into his chest.

“Look at me,” he chided, and she obeyed. That handsome, angular face, framed with unruly blond hair, smiled down at her, and she responded in kind. What did he see in her that Chet and Jake had not? Perhaps the flush of alcohol consumed colored her cheeks to a nice, youthful glow—she hadn’t been much of a drinker during her marriage, and standing here now, she doubted that would have made much of a difference.

Chet would have left anyway, and Jake had never been interested in anything more than friendship. This man, though, wanted more.

Why refuse him? To whom did she have to answer? Kate? Her daughter dated a younger man herself!

“Come on up,” he said. “It’s a nice view. You can see straight down into the grocery store if you stand in the right place.”

“Will they be able to see up?”

Jeff shrugged, and in a voice that didn’t sound like hers, she added, “Too bad.” 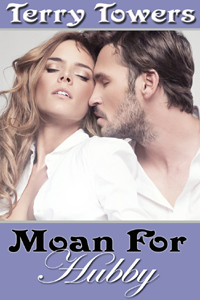