The Library Crawl: More Stories for Submissives and their Masters 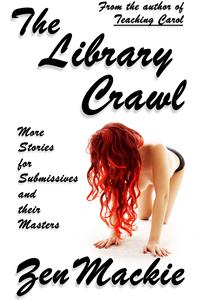 The Library Crawl: More Stories for Submissives and their Masters

What's the matter, mister, haven't you ever seen a fat girl before?

Marie hated going to these meetings anyway--the endless discussions of trivial crap, the subtle and not-so-subtle jockeying for power--and now this suit from the board of directors was staring at her. Not overtly, and certainly not when she was looking in his direction, but she'd caught him at it more than once from the corner of her eye.

She knew it wasn't because she was attractive. She wasn't--she was overweight and plain and she knew it. A 28-year old virgin, in fact, and more than tired of it.

A friend had told her once that she had nice eyes and, "a really sensual mouth,"--and on occasion she thought she'd noticed a co-worker's gaze lingering on her large breasts. She secretly thought they were her best feature and sometimes wore a push-up bra under her otherwise shapeless clothes to accentuate them--at least to herself. But she couldn't imagine ever attracting someone close enough to truly want her.

Especially not a snooty-looking guy like this, this ... what was his name? She'd heard him being introduced at the beginning of the meeting but had paid no attention. Robert something, that was it ... Robert ... Vanderpost, or something snooty like that to match his face. Robert. He'd probably take offense if you called him Bob, she thought.

Bob the Snob. She smiled sourly to herself. Well, Bob the Snob, I don't know what you think you're staring at. You're no great shakes yourself.

And it was true, he was not particularly handsome. He looked to be in his early forties and had a rather blunt-looking face, although his prematurely gray hair and close-cropped beard gave him a certain dignity. And he didn't look like he spent any more time at the gym than Marie did, although he wasn't fat, just a little soft around the edges. His dove-gray suit looked expensive and fit him perfectly.

Not that she cared. She just wanted the meeting to be over with so she could escape his condescending glances and get back to work.

And finally it was. She worked. At noon, she took the elevator downstairs and went out to lunch--by herself, as usual. She came back. She stepped into the already crowded elevator and waited dully through a seeming endless number of stops, shuffling to one side or the other to let people off.

Then, shortly before reaching her floor, she heard a soft voice by her ear.

"You have magnificent breasts."

She whirled around, ready to lash out at whoever would dare to say such a thing to her in a public place. And found herself face-to-face with Robert Vanderpost. Bob the Snob.

This only infuriated her more. Convinced he was mocking her, she open her mouth to scream at him...

...And found herself stopped cold by his hands grasping her shoulders.

And his eyes: they were blue, intense and penetrating, and seemed to look right down into her soul. Marie found herself unable to speak or to look away.

The elevator stopped. In the instant before the door slid open, he leaned close and said softly, "You've been waiting a long time."

Then he released her shoulders and stepped around her to exit the elevator, leaving her stunned.

All that afternoon she was unable to keep her mind on her work. What had he meant? No--somehow she knew exactly what he had meant. But how could he have known?

She left work at the usual time and took the subway out to where she lived. It was hot, the sidewalks were crowded and she was preoccupied, which was probably why she walked the first of the three blocks to her home before she noticed him walking beside her. Not behind her, like a stalker, but beside her, as if they were taking a walk together.

This was too much. She thought about turning and confronting him, but what could she say? Don't walk next to me? She might get him to move away a little, but she couldn't stop him from walking on a public street. He hadn't spoken to her; hadn't so much as looked her way.

Fine, she thought. Let him walk me home. If he sets one foot in my building, I'll call the cops. She slipped a hand into her purse and found her cellphone. And her pepper-spray.

She turned the corner onto her street and he moved in tandem with her. She made her way to the brownstone building where she lived and stopped at the bottom of the steps. She turned to face him. She was planning to spit out something along the lines of, 'All right, now you know where I live. So fuck off, asshole!"

But he spoke first, as if he had been merely waiting for her attention. "Nothing is going to happen that you don't specifically ask for."

He said it in a perfectly matter-of-fact voice, as if stating the obvious. And there was nothing the least bit threatening about the way he looked at her, even though she found his blue-eyed gaze every bit as disturbing as before. There was power in it, yes, a great deal of it--but nothing of anger or violence.

So when he took her gently by the elbow and began leading her up the stairs, she made no resistance, ignoring the unspoken coda to his words:

You are going to ask.

Well, for starters, Bob the Snob, she thought as they approached her apartment door, I'm specifically not going to ask you in. She opened the door, fumbling nervously with her keys as she did so, and went in...

But she left the door open and had no idea why.

She put her purse down on a small table where she was pretty sure she'd be able to reach it easily if need be. She looked back. He was still standing in the doorway, looking interestedly around at her apartment (making her glad, for once, that she was such a neat-freak) but otherwise showing not the slightest intention of moving from the spot. She was sure he'd remain there for hours. She considered closing the door in his face.

Oh, the hell with it, she thought, and waved him in.

He stayed where he was, but raised his eyebrows slightly.

Oh. Right. "Please, do come in, won't you," she asked in a sarcastically posh English accent and sketching a curtsy as she spoke.

"Thank you," he said, ignoring her tone and stepping inside. "Would you prefer to leave the door open?"

She was not afraid of this man, she told herself. She watched him closing the door then turning back to face her. His expression was unchanged--he was simply waiting.

"All right, now what?" She was uncomfortable, she told herself. Not afraid.

He smiled slightly and shrugged. "Whatever you want."

"And just what do you think I want?"

Ohhh ... thought Marie. She swallowed, unable to tear her gaze from his.

Then the slightest hint of a smile flickered into his expression, and he said, "And, for starters, I think you want someone to admire those lovely breasts of yours." He glanced down at them and back up again before continuing, "At least, judging by the lingerie."

Marie glanced down ... and blushed. Maybe a white blouse wasn't the smartest thing to wear over a black lace push-up bra. But maybe she didn't care. She met his eyes again and defiantly threw her shoulders back, causing her breasts to lift even higher, daring him to look 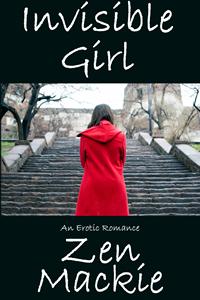