Ted’s life after the crash landing on Leroya turns out to be a fast rollercoaster ride with women lusting after his body, a ruler out for war and an empress with different goals of her own. Will Ted find a way out? 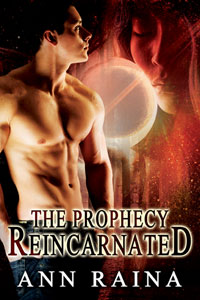 He thought about Yaladan’s special abilities while dropping his clothes to wash himself. He didn’t turn when he heard someone enter and was surprised by the touch of warm hands on his hips and butt.

“I didn’t know you were that eager.”

“I didn’t know that you were already waiting for me.”

Startled, Ted swiveled around. Nephren faced him with a smut grin.

“You! What are you doing here?”

Nephren gave a graceful shrug. “Share the hut with you.”

Ted wanted to stay angry, to throw Nephren out, but the touch of Nephren’s hands on his bare skin was pleasant, no, exciting, and it stopped all words. He felt warm and comfortable, touched in places deep inside him he hadn’t known existed. His breathing and heartbeat accelerated while Nephren’s palms explored Ted’s chest and inched lower, never losing eye contact. The knots of the chastity device opened like touched by magic and the leather fell away. Ted took a step backward and another. Nephren followed and held Ted by his hips, bowing forward. His tongue moved in sensuous circles across Ted’s chest and nipples.

Ted’s mouth was dry, his eyes closed. He wanted to get away and his mind knew he should, but his body enjoyed the arousal too much to oblige. For a moment, he felt ripped apart, as if his conscience had decided to leave his body to the greedy hands of a would-be lover, unable to control the flesh. The tingling sensation increased until his hair stood on end. He put his hands on Nephren’s upper arms.

The sudden rush of power felt as if finely crushed ice poured over his lower body. Gasping, he jerked away, but Nephren followed, keeping the link by holding fast to his hips. Ted shuddered, unable to move, hardly able to breathe. His mind knew he had fallen into the hands of a great seducer and his body enjoyed it immensely.

“I’ve never felt anything like that before.” Even to him his voice sounded breathy and afraid. The longing in his loins rose to a new high. He craved to be touched.

Nephren’s smile was like a spark that would soon blossom to flame. “That’s what I wanted to tell you all the time.” His left hand massaged Ted’s cock and the other man’s attempt to move away stopped. “We are much more powerful than the Haldru. In so many ways. Nobody will stand against us. No one. The Haldru will dwindle and fall by the snap of our fingers.”

Ted frowned and bowed backward, fighting for control like a swimmer trying to climb out a slippery pool.

“That doesn’t give you shit when it comes to reigning this country.”

Ted fought his body’s growing desire, but it felt like nailing fog to a wall. Breathing seemed hard work, taking a step even harder. In his mind, he already took Nephren down on the soft covers and loved him with his heart’s desire. It cost him a great effort to form words.

“I’m not even interested in staying on this planet. Damn you, Nephren, why should I help you rebel against your ruler?”

The drowning emerald eyes gave their best to be persuasive.

“Because he won’t let you go. I know that. But if you help me, I promise you that you’ll leave this planet as soon as my reign is established and strong enough to hold without you.”

Nephren pressed his body against his, lowering his hands to caress Ted’s accessories with experienced movements. His arguments were very convincing and Ted struggled for a coherent thought. He wanted to close his eyes and give himself to the younger man, right now, without holding back. It would be so easy, so wonderful, so satisfying. It would be unlike anything else he had experienced and he longed for it with all parts of his body.

“You’re much better off with me than with the Haldru. I know he won’t let you go. I heard him tell his new confidant. He’s too afraid you might fall into the hands of his enemies. And that, my dear Ted, would be really bad.”

“You try to frighten me.”

“No, not frighten, Ted.” Nephren rubbed the other man’s cock with more vigor. “Just open your mind to other suggestions and you’ll explore whole new lands.”

Mark Me (MM)
Shawn Bailey
In Shelf
$4.50
Tweets by
sirenbookstrand