Leading two separate lives, Jewelry Designer Alyssa Maguire never expects her secret life as an Underground Railroad Operator for Weres to lead her not only ona journey of a lifetime but to the one man who is destined to be her True Mate.

Blake Donovan is a Private Investigator on a vital mission when he simultaneously meets his mate and learns of his mother's attack and possible abduction. With danger and intrigue surrounding the newly mated couple, Blake and Alyssa must follow the clues left behind at the scene of his mother's disappearance and rescue her before Midsummer's Eve or risk humanity's enslavement bysomeone so evil evenvampires whimper in fear.

Can Blake and Alyssa rescue Jeanne Donovan in time to prevent humanity's enslavement or will all be lost, including their newfound love and commitment to each other?

Before she could guess his next move and perhaps protest, he placed her legs over his shoulders and gently parted her with his fingers. The second his tongue touched her clit, her entire body grew rigid and a keening moan filled the room. He smiled against her, then once again flicked the little nub with his tongue. She shot off like a rocket, screaming his name over and over, begging him to take her, to stop torturing her even as she continued to come for what seemed like hours, not just the seconds that had actually passed. She wanted more, begged for more. She wanted him deep inside her and he couldn't wait to give into her demands.

After savoring the results of her climax, Blake once again started working his way up her body. He stopped at her breasts, then slowly trailed his finger around and around her puckered nipple, watching in amazement as the nub grew harder. He couldn't wait to taste them, couldn't wait until one day they grew plump, filled with the milk that would nourish their cubs. While still lost in visions of the future, she grabbed him by the shoulders and tried to yank him toward her, but he didn't budge.

With the ease of someone who knew just what to do to drive a woman to the edge of her patience, Blake lightly tweaked her other nipple until they were both standing at attention, just waiting for inspection. How could he refuse such a tempting offering?

"Blake, please." She begged. Don't you know how much I need you--need to feel you pressed against me, buried inside me?

Finally, he lowered his head, swirling his tongue around one rosy tip, before taking it into his mouth, sucking greedily, all the while using his other hand to pluck her other nipple. It wouldn't be right to ignore the pebbled nub while lavishing attention on the other.

Alyssa squirmed beneath him, her movements frantic. Hell, he couldn't take much more of this himself. He couldn't take not kissing her a moment longer. He had to taste her again. With that thought in mind, he left her breasts and rose to ravish her mouth. Their tongues swirled and twirled around each other. Her lips were silky soft, a contrast tohis. Her taste exploded on his tongue, swamped his mind, intoxicating him. He knew that he needed to come up for air, but not yet. Not just yet. After a few more minutes of ravaging her mouth, he knew it was no longer enough. He needed more. He needed her. Now. "Roll over, Alyssa," he growled.

"I need you on your stomach, sweetheart. It's part of the initial mating ritual."

"Oh, Okay." They weren't going to do anything kinky, were they? Well, kinky with Blake might be a fascinating thing to experience.

He wanted to chuckle. He knew she didn't know she was projecting her thoughts to him. He also knew she wouldn't like that he was aware of what she was thinking. He was alsowise enough to know she wouldn't find the humor in this situation. Instead, he focused on her body, on all the things he wanted to do to her, experience with her. When she finally complied, dropping her chest down onto the mattress and lifting her ass into the air, he thought he'd come right then and there. Such a simple act of submission but it just about felled him.

Obediently, Alyssa pillowed her head on her arms. Blake knew she was anxious, but they had to follow their kind's customs when making love for the first time. That meant he'd have to try to convince her to let him make love to her from behind, doggy style, so to speak, though she didn't seem to have a problem with it so far even if she had questioned him at first.

Though his beast wanted desperately to mount her, mark her and mate her, he also didn't want to rush things. They had all night. He would show her tenderness before mating with her as custom demanded. Of course, she wasn't like others of their kind. She was independent as all get out, as well as a believer in equal opportunity and able to think for herself. Hell, she'd probably enjoy herself, even after he pinned her shoulder from behind, his teeth clamping down as he demanded submission while he entered her.

Damn, she was even more luscious from the back. At the base of her spine, she had two dimples and her ass was not only lush, but firm as well. She obviously worked out a lot. There wasn't a spare ounce of fat anywhere on her body.

He smiled at the clear frustration in her voice. Just knowing that within seconds she'd be forever his, had his heart racing, his palms shaking and his cock hard as rock. "Hold on, baby. This might get rough." 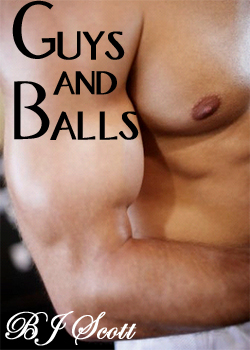