Serena Patterson has been on the run for seven years. Now, broke, tired, feeling defeated, she feels drawn to the home she'd left so many years ago and the three brothers she loves so much.

Giving in to her instincts, Serena returns, but only for one last glimpse of the Turner boys, Brady, Asher and Damon. She knows that if she actually makes her presence known, she'll be putting their lives into as much danger as her own has been all those years. Serena makes a decision. She is the one they're after. With her out of the way, danger will be averted from her brothers.

The Turner men are overjoyed that Serena has finally returned home to them, only to watch in consternation as she drives away again. They will not let her get away from them this time, for she doesn't know her first transformation is about to happen, and it can only happen if she mates with them.

"Into the water, sister." Ash used his old endearment.

He'd often called her sister, in memory of the sister he'd lost along with his parents. Though if they had any idea how unsisterly she felt about them, they wouldn't call her that out loud--they wouldn't even think it. What she wanted to do with them--to them--would be a sin if they were blood kin.

Without further preamble, Brady took off his jeans, picked her up and walked into the Jacuzzi with her. The warm bubbling water enveloped her. He sat her down on one of the benches and knelt in front of her. Ash and Damen took their pants off and sat on each side of her. She couldn't help but admire their bodies. They'd always been nicely built, but now they were men, men who had filled out, had become more muscular. Even their cocks had increased in size she noticed, at the same time experiencing a sudden surge of excitement, a tingling between her legs at the thought of touching those cocks. Her gaze caught a shadow on Damen's arm. Peering closer, she saw a tattoo of a wolf with some kind of weapon over it. That was something new. He didn't have a tattoo when she'd left. Closing her eyes briefly, she pictured them naked as she'd just seen them and imagined what size their cocks would be if erect and felt her heart hammer her ribs. Brady left her for a moment and quickly returned with three containers.

"Ash, you shampoo her hair. Damen, you massage her with this oil after I wash her." 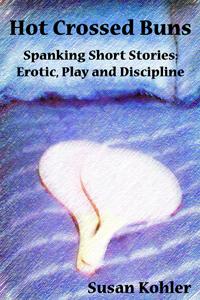