The Summer of Our Discontent

Summer dreams have become summer nightmares for Collie McMillan. His boyfriend, Danny, tells him he wants to break up and see other people. As if that’s not bad enough, he and Danny still share an apartment. Collie can’t help but see how popular Danny’s become, and it’s breaking his heart.

Danny Davis loves Collie to distraction. But a moment of stupidity has become a summer of torture, for reasons he can’t explain. He only wants what is best for Collie, and apparently that isn’t him.

Two young men with the same problem—loving someone they can’t have. Can they turn summer nightmares into forever dreams? 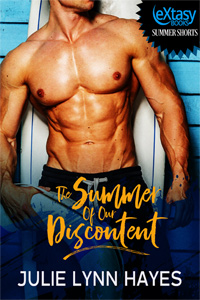 The Summer of Our Discontent

A sudden splash of cold water dampened my reverie, drawing me back to the present. To the here and now. I drew my feet toward me to avoid the unexpected geyser. I might be sitting poolside but I had no intention of getting wet.

“Sorry, man,” came the flippant apology from the jerk who had just cannonballed into the pool.

Patting my carefully slicked back hair, I scowled in his general direction. Not that he noticed or cared. Ignoring him, I returned to my previous occupation, before I’d gotten lost in thoughts of Danny, and buried my nose a little deeper in my paperback. Not that I was actually reading, mind you. I just wanted to give the appearance of reading, so no one would suspect what I was actually doing. Which was spying on my roommate/boyfriend.

Ex-boyfriend, still roommate. Awkward situation, but one I had to live with. All right, one I chose to live with.

And while I might present a hard shell of indifference to the world, a mask of I-don’t-give-a-shit for the benefit of friends and acquaintances, I found it harder to lie to myself when the damn truth was a painful reminder that constantly stared me in the face every damn day. I was very hurt by what had happened, and I ached for what was. For what we had. And most of all I ached for Danny.

Truth be told, I could have moved out. Made other arrangements for the rest of the summer and the fall semester, if I truly wanted to change the situation. There were provisions in place for doing that. Management wasn’t so hard-nosed that you couldn’t change roommates. Sometimes things didn’t work out, people’s personalities didn’t mesh. Shit happened. Especially if you ended up living with people you’d never laid eyes on before coming to college.

But that wasn’t the case with us. Danny and I meshed perfectly and had ever since high school. From the beginning, it was Danny and me. Always together, inseparable. Our friends even referred to us as the Ozzie and Harriet of our school, so mired in domestic bliss were we. With Danny’s encouragement, I had come out to my parents in our junior year. I’d never thought they would accept the idea that I, Collier McMillan IV—Collie for short—could possibly be gay. But Danny had helped smooth the way for my great revelation, and Mom and Dad had been surprisingly cool about the whole thing. They didn’t so much as kick up a fuss when I told them I was going to attend Mizzou, aka the University of Missouri at Columbia, and not some Ivy League school of their choosing. I know my dad had dreams of me graduating from some prestigious Eastern seaboard university and joining him at his firm. I was amazed and pleased when he didn’t squawk once.

Right now, though, on the whole, I wished I were at Harvard. Or Princeton or Yale. Or anyplace where I wouldn’t have to watch my ex charm the pants off the male population of The Habitation, the off-campus apartment complex where we lived.

Why couldn’t I be enough for him?

Giving up any pretense at reading, I peeked over the cover of my book and covertly studied my ex.

Danny Davis was tall and lean but not particularly muscular. In fact, with his quiet, studious personality and his propensity to be agreeable, he was the kind of guy the bully on the beach would kick sand at then laugh. He preferred video games to beer, quiet music to raucous rock and roll. His idea of the perfect night out was going to some kind of museum, whether art or science or history, then grabbing a burger afterward.

God, how I loved him for that.

He was also brilliant, highly motivated and very artistic, and incredibly honest. So when he told me, at the start of summer, that he needed to see other guys, I believed him. I knew it wasn’t a game he was playing to get my attention—he already had that, and he knew it. And his words broke my heart.

Of course I tried to change his mind. Hearing wasn’t the same as understanding or accepting.

He’d given me an exasperated sigh as he removed his large black-rimmed glasses and rubbed at first one lens, then the other, before sliding them back up his nose. “Collie, don’t,” was his only reply. “You’re better than that.”

No, I really wasn’t. I wasn’t above begging on my hands and knees if I thought it would help. Grovel on my belly, like the worm I obviously was. But before I could even think of putting my plan into action, he’d walked out of the apartment, closing the door firmly behind him with a sound that had gone straight to my heart.

Four weeks had passed since then. Four weeks, three days, and a few hours, to be more precise. We occupied the same space but we were separate, in an almost-like-strangers kind of way. We lived together. Hell, we even worked in the same place, both of us doing work study at Ellis Library on campus. I used to love that, but now it was a form of slow, sweet torture. To see and not have. Not talk, not touch…not anything. 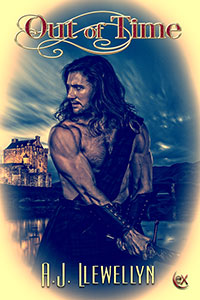