Threesomes - When One Lover Is Not Enough

A businesswoman, whose new flat used to be an escort agency, hires herself out to a young couple for the night. Three close friends recreate a night of pleasure when they went further than just friendship. And a surprise is in store for Martha when she is drawn into her neighbours Peter and Pierre’s volatile love life.

Whether it’s one woman with two men, two women with one man, or just a trio of same sex action, three is never a crowd in this sensational collection. 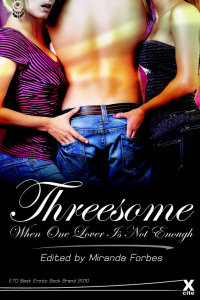 Threesomes - When One Lover Is Not Enough

‘Beth?’ Rob’s eyes were like a rabbit’s caught in the headlights. His voice cracked as he attempted to continue. ‘I ... uh, are you, er, sure about this?’
I think my fingers stroking his inner thigh let him know just how very sure I was, and I noticed Phil doing the same on the other side. ‘Oh Jesus!’ Rob whispered, his eyes practically rolling back in his head. ‘Christ! Er, give me a minute, OK. I don’t think I can walk right now.’ That wouldn’t have surprised me, judging by the way his leg was trembling under my hand. Oh yeah, and the massive boner he’d just sprouted. I noticed Phil giving it a quick grope before we let Rob be for a minute.
We didn’t get another round in – there was an unspoken agreement that what we all really wanted to do was leave as soon as possible. You could feel it in the air, in the spaces between our awkward words and our needy bodies. There was a cloud of lust around that table so thick I’m surprised the rest of the punters couldn’t see it.
‘Ready?’ I asked my men, and they nodded, following me out into the cool night air. Phil and I chatted about films and TV shows on the short walk to our flat, carefully avoiding the subject I reckon we were all thinking about. Rob kept his trap shut and I worried that he was having second thoughts, but Phil slung his arm around Rob’s shoulder so I snuck mine around Rob’s waist, and somehow we managed to negotiate the narrow pavements without having to let go.
It was once we’d stepped through the front door that things became awkward again. I’m not sure what I’d expected. Maybe that we’d be ripping each other’s clothes off in the hallway. As it was, once we’d separated to get through the door, Rob felt obliged to offer Phil the grand tour of the flat, all three rooms of it. I didn’t think that’s what Phil was after, so I suggested they make themselves comfortable on the sofa. There was a bottle of blackcurrant vodka in the freezer and I reckoned that’d go some way towards loosening us all up a little. Well, loosening the guys up, anyhow. I was already feeling pretty limber and lithe and oh-so-ready for a bit of action.
And so for the second time that evening I walked in on the guys while carrying drinks. Bugger me, they were sucking face! I nearly dropped the shot glasses, my whole body trembling with anticipation. God, there was something so fucking sexy about watching them kiss. Nothing gentle about it; just raw, animal passion. Rob’s hands were everywhere, as if desperately making up for all the years of denial. Phil’s hands were more relaxed, one holding Rob’s head, the other kneading his arse. I could tell just how turned on Rob was getting by the tent in his jeans and the way he moaned into the kiss. Oh yeah, that and the way he started frotting against Phil’s hand when it found its way down to his dick. Let’s not forget that. That was hot.
I dropped onto the sofa next to them, happy to watch for the time being. Almost absent-mindedly, I pushed my hand up my skirt to my aching pussy. Rubbing myself through my damp knickers, I reached a fever pitch of excitement so quickly that I just couldn’t help reaching out for Rob’s erection, just as he was reaching out for Phil’s. As I rubbed him through the denim, he groaned and bucked up against my hand, so I set to work on his fly. Freeing Rob’s cock and taking it into my eager mouth, I caught a glimpse of him managing to get Phil’s out of the confines of his tight jeans.
Sucking Rob’s cock and watching him give his first fumbling handjob to another guy, I had a thrilling idea.
‘Phil? How about giving Rob your dick to suck too?’
‘Huh?’ Rob said, as Phil scrambled to his knees. My poor love, he looked dazed and confused; his hair dishevelled and his face glowing. ‘Oh, right. Yeah, uh, OK.’ Rob gave a breathless laugh as he caught sight of Phil’s prick. He went a little cross-eyed trying to focus on it, which made me want to start giggling too. I stifled it by swallowing down Rob’s cock again, tilting my head so that I had a great view of Rob taking Phil’s hard length into his mouth, just a little way at first, pulling back to kiss and lick. He looked like he was in heaven and I wondered if I should be feeling jealous, but just then he looked down at me, smiling around the head of Phil’s cock. Yeah, there was love in that look, all right. We shared a moment, a special one, what with both of us having a mouthful of dick. The strangeness of the whole situation hit me squarely. I mean, if you’d told me that morning that this is what we’d both be doing before the end of the day I’d have said you were a nutter, but here we were, and it was bloody fantastic.

The Middlesex Suite
Gwendolyn Page
In Shelf
$2.99
Tweets by
sirenbookstrand