It was the dog's fault.

That I was out until three in the morning was, perhaps, an issue, but I personally didn't feel my odd hours should really factor into the equation. Wouldn't any rational human being be bothered by the high pitched yelp of the Yorkie-gone-mad next door? Was it really just me? I couldn't be the only one considering playing my noise-ordinance card with the local authorities, could I?

Still, I didn't. I rolled around in bed, made sure the windows were shut completely, turned on two fans, the air conditioner, and covered my head with pillows, but that dog's little yap pierced through them all. Eventually, my lack of sleep started to affect my work.

Granted, bar tending wasn't brain surgery, and while the clientele didn't mind an occasional on-my-feet nod and subsequent heavy hand, Tilly, The Rusty Nail's owner, was going to catch on to me eventually. I knew it was getting bad when the sound of the blender could start to lull me to sleep.

And the most objectionable thing was, the Yorkie was adorable. When I yanked the drapes, ready to open the doorwall and go out on to the balcony in a fit of temper, there it was--the little canine seemed sure that it was his duty to run the perimeter of their privacy fence, barking nonstop all the while--but it was so cute, I just couldn't say anything.

In my limited experience of pets, I didn't know what calling the authorities would do. Did they take away barking dogs? I couldn't subject the animal to some ominous threat, no matter how much it yelped. The guilt of living with that wouldn't afford me any sleep, either, I reasoned--like some twisted Wizard-of-Oz version of the Tell-Tale Heart, I knew that little Toto-face would haunt me. I couldn't be the masculine version of the Wicked Witch of the West, as much as I wanted to when Barkapalooza began every morning at six.

Then, one day, there was no more barking ... and I didn't even realize it until I was singing in the shower some time around one in the afternoon, feeling blissfully rested and content. Frowning, I dried off and headed back to my darkened bedroom, wincing at the bright sunlight that poured into the room when I tugged the drapes back to look down into the neighbor's yard.

I was actually worried about the little guy. Was he sick? Were the neighbors on vacation? I didn't know much about my neighbors in the condo complex. The couple on the other side of me didn't have pets--that much I knew. On the Yorkie side, since I'd only seen the one woman, so I assumed she and the Yorkie were it.

When I opened my drapes, there was the neighbor, stretched out bare-assed on a chaise lounge--and what an ass it was! 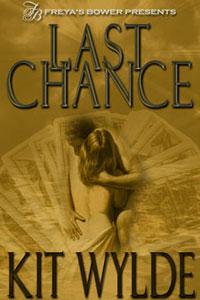