To Bi or Not to Bi

They say we all have gay feelings deep inside, but for most of us those feelings never surface. Will Crown, amateur stage actor, is about to put that theory to the supreme test with the help of good friend and fellow actor, Adam Jester, who harbors his own secret—he’s in love with Will.

Whether it’s timing or simply an inevitable turn of events, the two men expose and act on their dark secrets knowing their lives will never be the same. Will Will embrace his newfound sexuality or regret his decision—and, will he reciprocate his roommate’s love? 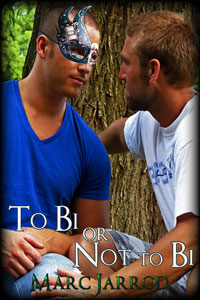 To Bi or Not to Bi

Will Crown and his close friend and roommate, Adam Jester, along with several of their friends belonged to an acting ensemble—Shakespeare’s Players. They were a summer stock group who performed, aptly, Shakespearean plays. With Will an automobile salesman who marketed very expensive cars—BMWs, Mercedes—and Adam a mortgage broker, their respective high-anxiety jobs begged an outlet to relieve stress. They found that release by performing.

The city of Chester, Missouri had hired the group for the summer.

Every Saturday evening and Sunday afternoon they performed plays from tragedies such as Macbeth or King Lear to lighter fare, to comedies such as Much Ado About Nothing or As You Like It. That week they planned to perform Hamlet for the entertainment of the citizenry. Will played the lead and Adam, the murderous Claudius. The rest of their troupe took on a variety of roles including Horatio, Polonius, and Reynaldo

That evening, they’d wrapped up rehearsals then headed to the local watering-hole, Mangos, for a bite to eat. After motioning the bartender to send two pitchers of beer over, the group sat at their usual table. While waiting for Katy, a slightly plump, always friendly waitress to bring over the menus, the men leaned back and chatted.

Just like every other time they’d dined there, Will noticed Adam disappear for ten or fifteen minutes after giving them some vague excuse. By the time their meal arrived, he’d wandered back. And just like every other evening, Will saw Adam’s sheepish grin when he sat down to eat.

As usual, one of the members of the group asked, “Where in the hell did you go?”

“Made a call after checking my messages,” Adam mumbled.

Jim shot back with, “Yeah, that’s what you say every time we ask—I have to check my messages.”

Without missing a beat, Adam replied, “So why do you keep asking, then?”

Jim shrugged and smiled impishly. “I swear, if I didn’t know better, I’d think you’re checking the bathroom for some gay action.” After he said it, he laughed, sharing high-fives with a couple of the guys. Soon, everybody at the table joined in the laughter.

Will also laughed, though halfheartedly. He believed he was the only one who knew what Adam was really up to. He was sure Jim thought he was being funny, but actually, Will was also sure the man had hit on the truth about his best friend. Adam was gay.

After they’d all shared their fun, Will looked at Adam and saw him blushing and couldn’t help feeling embarrassed for his friend.

To get Adam off the hook, Will rubbed his hands together and said, “Hey, I don’t know about you guys, but I’m ready for some dessert.”

Will caught Katy’s eye and waved her over. Across the table from him, Adam seemed to relax.

There were reasons for Will’s suspicions on Adam’s sexual orientation. About a month before, Will had passed by a park on his way home from work. The area was a notorious hangout for gay men. Driving by, he saw men of all ages going in and out of the restroom or just lolling around the entrance. Because the lav was separate from the more populated areas, Will reasoned, it could easily serve more than one purpose.

Interest piqued, he decided to drive slowly past the bathrooms.

He confirmed what he had already suspected when he caught sight a few men checking each other out and rubbing their own crotches when they spotted a good looking prospect, or spotted a firm ass. That’s when he noticed a familiar vehicle parked in the shadows of the park’s entrance. It belonged to Adam.

Will had been friends with Adam since the fourth grade. By the time they reached high school, the differences in their appearance had caused problems—not between them, but with the rest of the world. For whatever reason, that only seemed to draw them closer together.

Even though they were the same age, Will was shorter, slighter-built and blond. He’d always looked several years younger than Adam’s larger, more muscular frame and darker looks, and that difference intensified during their teen years. What really set them apart was the shoulder-length, ebony hair Adam had resolutely refused to cut since reaching the age of sixteen. Even then, Adam had midday stubble, which added a good five years to his looks. Until they’d reached their early twenties, the difference in their appearance occasionally led outsiders to misunderstand Adam’s intentions—like him looking as if he was about to attack the poor helpless boy, Will, sexually or otherwise.

What had seemed hilarious to both of them soon became more than annoying when they found themselves being questioned by the local cops, security guards, or a well-meaning Joe. Now that they were mature twenty-seven year olds, Will still looked younger than Adam did, but at least he appeared over the age of consent.

While in high school, Will knew Adam hadn’t dated much. Occasionally, a girl Will was dating would set him up with a friend and they’d go out on a double date. None of those evening excursions had turned into anything permanent, for either of them. Once or twice, Will had questioned Adam about a girl. Adam’s answer was always the same—she was fine, but he didn’t feel anything special toward her.

Even back then, Will knew, deep down, Adam was different. Of course, as a red-blooded male himself, Will wasn’t ready to complete the thought progression by admitting his best bud might be gay. As a hormone-crazed high school student, he also wasn’t ready to wonder why the possibility of Adam’s being gay didn’t bother him. Or, why he sometimes watched a little too closely when Adam shared a shower with him after gym class or stood next to him at a urinal.

Finally, Adam found a girl and, after dating through college, they married.

Seeing Adam tie the knot, Will figured he’d gotten his friend’s sexual orientation all wrong. He chalked his friend’s lack of an early sex life to being a slow starter. However, something still niggled in the back of his mind. He wanted to be happy for Adam. He had nothing against his wife, Angie, but the churning in his gut wouldn’t rest. For some reason, he had a feeling their marriage couldn’t last. He wasn’t surprised when, after just two short weeks, Adam came home from his honeymoon announcing their separation.

Unfortunately for both Angie and Adam, the separation lasted only a month. Angie reappeared—pregnant.

Beast within the Maze
Mark Alders
In Shelf
$1.99
Tweets by
sirenbookstrand