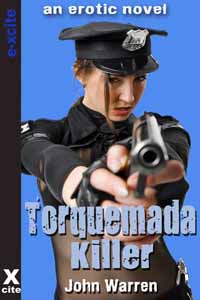 She tore her eyes away from the thing on the bed and found herself facing Edward Burroughs. Burroughs had been the senior scene investigator in several cases she had worked on previously. The small man with the bald, egg-shaped head was a meticulous investigator, who loathed any diminutive of his given name. ‘Edward,’ he had said, ‘my name is Edward, not Ed, not Eddie. If you wish I could provide copies of my birth certificate.’ It was an amusing affectation but it clearly defined the man’s precision. When he and his team were on a case, you could be sure that they didn’t miss a thing.

‘Bloody mess, isn’t it, miss?’ he said in a diffident tone that sounded almost as if he expected her to disagree with his assessment. ‘There are several aspects of the present case which I feel should be brought to your immediate attention.

‘First, the young lady is not tied to the bed as you might think. The attachment devices are carefully crafted leather cuffs chained to screw bolts set into the bed frame.’

Eva glanced at the bed, her gaze skittering off the figure. She noticed the nickel-plated chains that held it in an exaggerated spreadeagle.

‘Second, this bedroom is provided with accessories not normally seen in most middle-class habitations.’ He opened a closet door revealing an impressive set of whips hanging just inside.

‘However, I have kept the best for last.’ He gestured toward a book lying on a shelf across from the bed. It was the type of leatherette album used to preserve family photographs and memorabilia. With a retracted ballpoint pen, he flipped it open.

The first page showed a pretty, blonde woman smiling at the camera. What was incongruous was that she was naked above the waist, her hands seemed to be somehow fastened behind her and her nipples were pinched by cruel clamps connected by chains. Behind her stood an unsmiling dark-haired man wearing a leather vest over a naked chest.

Eva felt a rush. It couldn’t be this easy, but she knew it often was. Most murders took place between people who knew each other and many were or had been lovers.

Now all I have to do is get an ID of this creep, she thought.

‘Edward, is that the woman on the bed?’

‘I can’t be sure. As you can see, identification is difficult. I suppose we will be able to get a confirmed ID after the morgue makes her a bit more presentable. However, the height and weight seem about the same. I think the victim is a blonde. Also, there are several pictures around this apartment of the same woman, and most of the pictures in the album have her in them.’

He flipped another page. On this one, several pictures depicted the progress of what evidently had been a spanking. By the fifth picture, the woman’s ass had become a dull red, and her face showed the effect of considerable pain.

Or was it just pain? Eva thought to herself, quickly brushing the thought away.

Peppermint Sticks (FFMM)
May Water
In Shelf
$2.50
Tweets by
sirenbookstrand