When Tammy arrives in town to find everywhere but a single bar closed and shuttered, as if in preparation for a storm, her curiosity is aroused. Little does she realize exactly what kind of storm is approaching, as she is swept up into a world apart from her own.

A world of excitement and danger, one that she could never have believed existed. One that will herald many changes, and not merely for her as she experiences the touch of silver. 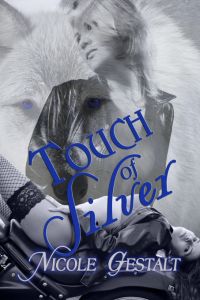 Tammy released a breath and relaxed her grip on the steering wheel of her van, when the door of The Bar and Grill swinging open in the dusty wind came into view. She feared it would be closed and barricaded shut like all the other shops and buildings she had passed coming to town. She pulled into one of the many empty parking spots, cut off the engine and got out. The squeaking sounds of metal drew her gaze up to the bar’s sign. Half the letters were either out or flickering, but the word open glowed without a problem. A grateful smile lit her face as she went inside.

Her nostrils twitched at the stale scent of cheap beer and cigarettes. There were no other customers in the joint, but she could still see smoke in the air. It was as if the haze was permanent.

Tammy peered through the dimness to wave at the burly man behind the bar. To those who didn’t know him, he looked rather imposing, arms filled with tattoos and piercings, but he was a complete softy. The fact that at least one person was around made her feel much safer.

“I’m not bad, getting organized for the next couple of weeks,” he said with a broad smile and continued to clean various glasses under the bar. Rob was well known for moving constantly, always liking to keep busy. Tammy had once tried to ask him about the habit, but had received no answer other than a shrug.

“Expecting a busy few days? You’d think all the other places would want to remain open rather than close early like they seem to have done. I just stopped by here to see if you knew anything about it?”

Tammy looked around the bar, noting the dark empty feel of the place. Since her father took over Red Clover Farm, she had never seen it so deserted.

Rob paused, longer than Tammy had ever seen him still. “How long ago was it you moved here?”

Rob nodded and started to clean the bar.

“Ah, then you never had an encounter with the pack before. They like their drink, and their pool. Tend to like their fighting too. One of the reasons the town closes down. Best you get out of the way and keep your business confined to the farm for a short while, at least for this week anyway.”

Tammy wasn’t sure if she should be more worried or intrigued. After a brief moment, she picked intrigued.

Rob looked around, his ears turned red about the tips. His hazel eyes shifted nervously.

“Why don’t I tell you later…when they’ve gone.” As he talked, he came around the bar and ushered her out. Before she had time to react, she found herself outside, in front of her van with the echo of Rob’s words ringing in her ears.

“Drive safe now, and I’ll see you in two weeks–or better yet longer,” he told her closing the doors to the bar.

Tammy blinked, unsure as to what exactly had just happened. She shook her head before she climbed into her van. The engine as it started up, seemed duller somehow than before.

When she pulled up to the entrance of the parking lot, she caught sight of the reason. A vast number of bikes headed toward the bar. They filled the road for as far as she could see. The noise of the bikes’ motors was deafening, but the riders, clearly used to it, conducted animated conversations with ease as they slowly steered her way.

Riders came up to her van, so close Tammy felt nervous they would collide with her. None of them did however; each turned at the last minute. All were in total control of their machines. Not wanting to risk taking the van through the group, she started to swing right.

Tammy glanced to the bikers once more and her stomach clenched with excitement. There was just something about the raw power of a bike and the look of the leathers that turned her on. The idea of no destination as you pulled out of the latest town and set off, enjoying the journey and the open road, was liberating to her. It seemed so different to the life she had, where each day consisted of various tasks she had to do and the general upkeep of the farm, especially now with her father away.

Another biker rode close to the van, and Tammy’s breath caught in her throat. This one didn’t have a helmet on. Silver-white waist-length hair flowed with wild abandon around her.

Tammy gazed at the woman’s muscular but lithe form. The leathers on her body appeared skintight. Tammy wondered if the rider had anything on under them. She dearly wanted to slowly peel them away to find out.

Realizing she was staring, Tammy jerked her gaze up and froze. Steely blue eyes stared at her with an intensity she had never seen before. Her heart hammered in her chest. The woman had the most fascinating eyes. Yet they were so cold and emotionless. Tammy wanted to get to know the person behind them, to wrap her arms around that waist and draw her close before kissing her passionately.

The woman held her gaze for a few moments, but to Tammy it felt like a lifetime. In that instant she fell in love, and wanted nothing more than to stop the van and speak to her.

Then as if nothing had happened, the rider nodded a tad before she turned and headed off into the parking lot. The spell broken, Tammy felt lost, as if something vital had been ripped away. Her whole body ached. She shook herself, and, very reluctantly, put the van into gear, managing a short distance before she had to stop.

Her mind was a mixture of confused emotions. Her hands trembled. She tried to calm down, but the image of the woman had seared itself into her memory. Tammy wasn’t that far away, it would be possible to turn around and find her. Sweep her off her feet, hold her body close and kiss those lips. She shook her head, taking a deep breath to relax.

No, it was stupid. With that number of people, she’d take hours to find. And one glance wasn’t enough to learn much about someone. She might not even like women, not like that, and for all she knew the woman could have been married. Tammy hit the steering wheel in frustration, trying to be rational.

There was work that needed to be done back on the farm, and it had to be finished soon. New seed needed to be planted and then checked on. She couldn’t postpone the job, unless she wanted the farm to fail in her father’s absence.

Besides, Rob had said at least two weeks, so the woman might still be around for a while. There were a number of jobs and excuses she could give for coming back this way, more if she thought creatively. Tammy would look for her then.

Feeling happier and more able to drive, Tammy glanced behind her as she pressed the gas. She noticed one of the bikers had separated from the group, and was looking in her direction. Tammy wasn’t sure why, but she was instantly filled with the sensation that the figure was watching her purposefully and not out of coincidence. She glanced out the van’s front windshield to make sure she wasn’t going to hit anything, then up to her rearview mirror. She kept driving until she reached a curve in the road, beyond which she would lose sight of the figure. Tammy slowed a little. The rider seemed to have got what they were after as they sat back on the bike and turned away. Confused, but mildly intrigued, Tammy drove on. She pushed her thoughts of the woman to the back of her mind, concentrating on the upcoming jobs.