Fresh from the academy, new spy Kat is sent on a mission to the far reaches of the galaxy, to find out if fugitive, Alexander Petroff, is hiding out in a club that caters to specific sexual pleasures.

With the help of fellow spy, handsome and protective Jason, Kat embarks on a sexual journey to unmask Alexander. 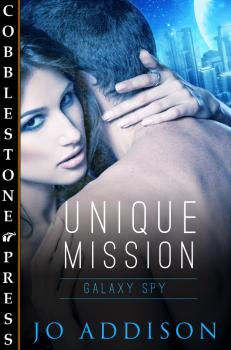 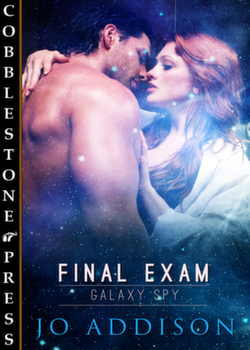 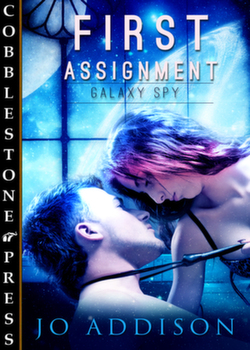 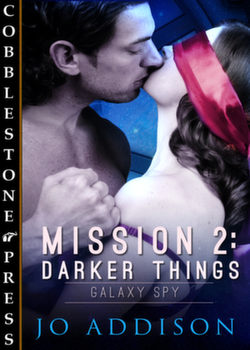 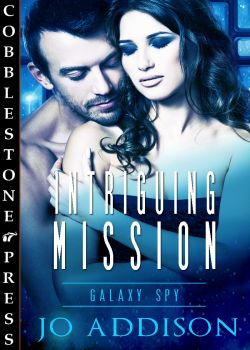 Kat stretched and purred contentedly, remembering how Ben’s hands had expertly explored every inch of her; awakening parts of her she didn’t know existed. It was hard to imagine that three days ago she had entered this room simply as V-714, but now…now she was Kat, a woman. She laughed, rolled over, snuggled under the sheets that still held the lingering scent of Ben, and their incredible sex.

Running her hands over her breasts, as Ben had done just hours before, she thought of the girl she had been five years ago. Still every bit a child at the age of at sixteen, she’d entered the Academy for Galaxy spy training. She’d been tall, skinny, and under-developed. Over time, the rigorous physical training, coupled with maturity, had turned her body to that of a woman. Her breasts were on the smaller side, but her legs were long and shapely, the envy of many of the other women. Her mousy brown hair had turned a deep, rich chestnut that hung straight and thick down her back. With near black eyes and a creamy complexion, she had grown into a beautiful woman; who had discovered that she apparently loved sex.

She never would have imagined that the girl who’d stood outside the door just days ago, would become the woman who now lay in this bed.

Ben had been kind and gentle with her during her final exam. It was required of all V’s, before their first assignment, to spend three days with a trainer to learn all about sex, and how to use their sexuality as a tool. Galaxy spies were trained in all areas, but it was no secret that their sexuality was their secret weapon.

Kat had never met a V who wasn’t nervous before their final exam, and many speculated about how they would fare with multiple partners once their training was complete. But after three days with Ben, Kat couldn’t wait to get her first assignment, and have many different partners. Why would anyone want to limit themselves to just one man?

Kat rolled on her back, stretched again, and let her mind drift back to three days ago when she’d been nervous and shaking. Ben had wasted no time wrapping her in his arms, and kissing her passionately. Breathless, she gazed up at him and smiled shyly.

“Well,” he’d said, “now that we’ve broken the ice, I’d like for you to go into the bathroom, take off that hideous jumpsuit, and change into what’s hanging on the back of the door.”

Still feeling flushed, and a little dazed from the kiss, Kat made her way into the bathroom and shut the door. Hanging on the back was a lacy pink bra with matching G-string. Heat rushed up her body, and she wasn’t sure whether it was from embarrassment or excitement.

Quickly, she stripped off the regulation jumpsuit and undergarments, and changed. She turned and looked at herself in the mirror. She had to admit, she looked pretty good. Her flat stomach and long, lean legs were just the right combination of strong and sexy. She turned slightly; her ass was small, tight, and high. For the first time, she felt womanly and powerful.

Taking a deep breath, she opened the door and went back into the bedroom area. She saw Ben’s eyes widen. He was sitting on the edge of the bed, wearing only his underwear. He stood up. She gasped. She had never seen a man undressed in real life, only in pictures or, if they were lucky, actual film. Years ago, when people fled Earth to this new world among the stars, so much was lost. What books or film that had survived were coveted and treasured.

There were many who wanted to recapture what had been lost those many years ago. They read anything they could get their hands on, looked at pictures and tried to emulate the clothing they saw, which resulted in a wide variety of crazy costumes. The academy stuck with jumpsuits and the only reason Kat knew that what she was wearing was a G-string was because the V’s had been shown a film with a woman wearing one.

“You look beautiful,” Ben said, taking in every inch of her.

Kat stared openly at his heavily muscled chest, arms and abs. He smiled when he saw her looking, and she quickly looked down.

“It’s okay to look,” he took a step closer. “And touch.” He placed her hand on his chest.

Kat’s hand tentatively traced the muscles across his chest, feeling his silky skin. He felt warm and hard. Her breathing quickened and a tingling began between her legs.

Ben moaned, and Kat removed her hand, thinking she had done something wrong. But Ben said quietly, “You’re a natural. Ready for more?”

“Good start, but we’ll have to work on you being more authoritative and in command.” Without warning, he reached behind her and unhooked her bra. He ran his hands over her back and down to her ass, cupping her. “Nice.”

He spun her around so her back rested against his chest. She stiffened. “Relax. I won’t hurt you. We have three days, and we’re going to take it slow, but we will get to know every inch of each other.”