Going back to the Wild West isn't at the top of guardian angel in training Maybelline Maxwell's wish list. But enjoying the perks of the local brothel along with completing her assignment to help Annie Grayson and Rand Banyon fall in love only sweetens the deal for the now deceased professional escort.

Earning her guardian angel wings is almost more difficult than Maybelline can imagine, but she’s bound and determined to help prim and proper Miss Annie Grayson and sexy Sheriff Rand Banyon fall in love. Even if it means locking them together in a room for a night at the local brothel.

If she succeeds in her task, Maybelline will get her coveted wings. If she fails, well she won’t be needing any winter clothes where she’s headed. Meanwhile, Maybelline decides to do a little side business of her own at the brothel. Might as well reap the benefits since she’s well-endowed with the assets.

Come along on Maybelline’s wild ride and you might learn a few new tricks of the trade for yourself. 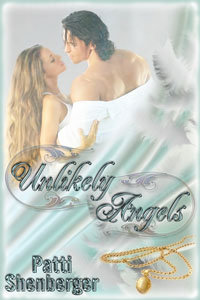 While Annie knew it was wrong to stare, she couldn’t help herself. Her insides were churning and not from the earlier libation. It was from what she’d just witnessed between Rand and Sassy.

A loud squeak of dismay escaped Annie’s lips and the woman quickly turned to stare at her.

“Excuse me, honey, but this is a private party between the Sheriff and I,” the woman drawled from her seated position in front of Rand. She didn’t look all that mad to see Annie standing there, just more irritated by the interruption.

“Rand?” Annie exclaimed, her gaze taking in the naked man in the tub, his eyes closed and head thrown back against the rim. “Is that really you?”

The man lifted his head and lazily scrubbed a hand across his wet face, sending droplets of water scattering to the hardwood floor outside the tub. “Who wants to know?”

“It’s me, Rand. Annie Grayson. I’m here to become your wife.” Annie continued to stare in awe at the bronzed figure seated only a few feet away. Her eyes traveled the length of his body, from his flush face to his broad chest covered with a light dusting of brown hair, down to his lean waist and lower still to his…

She tore her gaze away, looking anywhere but at his privates, now barely hidden beneath the bath water and Sassy. Her cheeks burned at the memory of what she just seen, her stomach rolling as she tried to comprehend.

“Annie?” Rand groped awkwardly for balance, his hands and feet slipping on the wet copper bathing tub as he tried to stand. Mindless of his nakedness, he set Sassy aside and reached for the small homespun towel slung over the edge of the tub and struggled to cover himself, to no avail. Sliding on the wet floor, he gingerly crossed the room to stand in front of Annie. “Annie? What the hell are you doing in a brothel?”

Before he could say another word, Annie turned her face back to him, her gloves clenched tightly in one fist. She reached out her other hand and poked him square in the chest. “As your bride-to-be, I could ask the same of you, Sheriff Banyon. Is this any way for a soon to be married man to behave?”

Once Her Man, Always Her Man
Heather Long
In Shelf
$2.99
Tweets by
sirenbookstrand