It is a steamy summer in Spirit Lake. After a year away, during which her father, Harold, died of a heart attack, Erica returns with her daughter, Joanna, and her mother, Diane, in tow. The reason for her return is twofold: Jake Lakota has planned a memorial service for his brother, Joe. Also, Erica plans to sell her half of the inn to her friend and partner, Paula, after which she will return to Florida with Diane and Joanna. Soon, however, it becomes apparent that this plan will not unfold as expected, since things are in turmoil at the inn. It seems that the casino will be built across the lake after all. Also, the ghost in the basement continues to terrorize any who venture near the wine cellar.

Murder and deceit and deadly secrets are the order of the day as the town of Spirit Lake prepares for its annual July Fourth Founders’ Day celebration. In the midst of it all, Erica is blindsided by unexpected events that her turn world upside down. 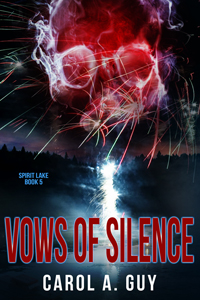 Addie Goddard stared across the dining room table at her husband Charles, again struck by the sheer magnetism of the man. To say he was merely handsome did him a great disservice. Even though he’d just had his forty-first birthday, he was still as good looking as the day she’d met him twenty-one years ago.

She’d noticed a little gray at his temples the other day, but it didn’t detract from his appearance. His black hair, worn a little longer than she preferred, was still thickly luxuriant. He had finely chiseled features along with a strong jaw line.

He looked up from the roasted chicken, settling his cobalt blue gaze on her. “You’re awfully quiet tonight, Addie.”

Her eyes met his. He seemed a little apprehensive. She wasn’t surprised, considering. She forced a smile. “There’s a letter from George on the table in the foyer.” Their son, now twenty years of age, was a student at Harvard University in Cambridge, Massachusetts.

“I’ll read it later.” His voice had an edge. He took a deep breath, putting his fork on his plate. “Anna Mae won’t be home tonight?”

Addie bit back a sharp response. He knew the answer to that question. “No, she’s staying the night at the Hastings’ in town. She and Ruth are working on that school project.”

“I took her in the carriage this afternoon while you were working in the den,” she added.

A look of irritation briefly crossed his flawless face. “I remember, Addie.” As though realizing he’d spoken too sharply, he smiled.

She felt her heart squeeze a little as it always did when Charles smiled at her. She’d often wondered why he’d married her in the first place.

Of course, they always marry the plain ones, don’t they? It’s the beautiful ones they have the affairs with.

She shook that thought from her mind, even though she knew it was true.

“How did your work go this afternoon?” She was trying to focus her mind on this evening, this moment, anything to keep from remembering what happened earlier. In a nervous gesture she ran her hand over her sleekly pulled back brown hair. Lackluster brown, that’s what her mother had called the long, thin tresses. “You remind me of a little sparrow,” she’d often said.

A sparrow. Nondescript, easily ignored, with my mousy brown hair and pale green eyes. Sometimes I felt invisible. Until Charles, that is. He made me feel vibrant, like a beautiful swan. At least for a while.

Charles was speaking. “….into town tonight later. This client won’t arrive until after eight but he wants to meet me at the office.”

Another client in town. Another late evening meeting. She should be used to it by now, but it still wrenched at her heart when she had to sit here pretending to believe the lie. Usually Charles’s affairs fizzled out quickly, leaving Addie with a certain sense of security, albeit an uneasy one.

“Let’s have coffee out on the porch,” Charles suggested as he rose from the table.

He was a tall muscular man who took pride in his appearance. He’d removed his suit coat, but still wore a white starched shirt and navy blue trousers. “It’s a warm evening, how about we row out onto the lake after we have our coffee. You can watch your precious mist rise off the water.” His tone lacked the light quality that usually accompanied any comment he made about her penchant for wanting to watch the mysterious fog rise each evening.

Their housekeeper, Mrs. Fitzgerald, came into the dining room to clear the table. Addie said to her, “We’ll have coffee on the porch. Then you can leave as soon as you’re finished with the dinner dishes. We won’t need you any longer tonight.”

The woman nodded as she began gathering up the plates, cups and silverware. Addie followed Charles outside.

The house, sitting on a hill just outside of Spirit Lake, was a three story Georgian style structure with one peculiarity. Instead of a portico, which was usually part of such architecture, it had a generous wrap around front porch. Addie stood for a moment, looking at the rose garden to her left. It was mid-June. The bushes, some planted by Josephine Billings, wife of the original owner, others planted by Addie herself, were blooming. Their heady fragrance filled the air. She inhaled deeply.