The lines of old magic are dying, diluted every generation by those without power. The few who realize their ancestry pull together and form Secrets Inc. in an attempt to find their perfect mates and strengthen their bloodlines. There is one catch. Few partners realize the magic in their blood. To unlock this power, their deepest, darkest sexual fantasies have to be brought out and fulfilled. Only then will the magic be reborn.

Tina is a full time college student earning money while working in an adult toy store. During her shift a stranger leaves her a flyer promising to fulfill her fantasies. The paper feels strange and from the moment she touches it, she feels different. Magic seems to surround her and the sensation only grows when a handsome man, Jacob, flirts with her. Only he is far more than she ever expected. 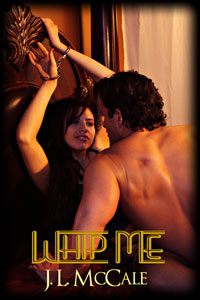 Tina watched the whip pop against the white flesh with a resounding crack, leaving a red mark and causing the woman in front of her to buck against her restraints. The woman was well endowed, nothing covering her breasts, just as her master preferred it. Her nipples were hard, dark brown, breasts hanging down as she knelt with her ass in the air. Her master stood to the side and petted those breasts just before striking her ass again with the leather. Red streaks covered her ass and back, but she never asked him to stop, in fact, she begged for more in a husky voice that said she meant it. Another hard slap of the whip struck her, followed by another. Finally, the woman on the screen began calling out, her body shuddering in full orgasm.

“I don’t know how you can watch this stuff.” Tina forced herself to turn away from the screen behind the counter at the Adult Dreams Bookstore. “It’s garbage. It’s complete garbage.”

“Please, I saw you watching it. You women are all horn balls.” Mark muted the volume and looked at her.

“Really. Look at the flyer a guy left today.” He slid it towards her. “He said to make sure you saw it.” Mark moved his eyebrows up and down as if he discovered something juicy. “Now, why would he do that?”

Townie and the Twink (MM)
Daisy Harris
In Shelf
$5.50
Tweets by
sirenbookstrand