Alwyn ab Brynn Ffrydd wants revenge against a powerful Baron without losing his king's support. What better way to exact revenge than to kidnap the Baron's long time mistress? But she is not what he thinks she is.

Shy, unworldly Milisent Mortimore has been confined for nine years by a brother who now demands she agree to wed a cruel, heartless man. Thanks to her father's will, she has the right to choose her mate or her spouse will lose her inheritance.

When Alwyn kidnaps her, desires flare and together they must struggle against the treachery of Alwyn's current mistress, her brother and the man he wants her to marry. In defying all three, Alwyn places his life at risk. Milisent saves him from certain death and together they celebrate their life of love. 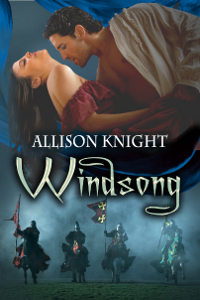 The next thing she knew, his arms held her. Intent on escape, she took a deep breath. But, she could not move. Nay, she stood frozen in his arms, for his scent attacked her senses. This man smelled fresh, like the air after a spring rain, and a unique fragrance, which must be his own. Nothing like the disagreeable smells she associated with the men of her acquaintance, the odor of old sweat, horses and unwashed clothing. Strange this man was so different.

Before she gathered herself to move away, he pulled her closer. She stared up into his soft brown eyes. Something in her melted like tallow against a hot flame. Of a sudden, he lowered his head and his lips were on hers, a soft brush that stilled her as if now she was pinned to the floor. She took a breath as the touch came again, only this time his lips stole the air from her lungs.

Heat and a strange sensation bolted through her like a streak of lightning. This was nothing like the pawing of the man Gilbert chose to husband her. Nay, for as his lips clung to her, pleasure engulfed her. Aye, this was wonderful.

She couldn’t help herself. She leaned into him and gloried in the warmth and security that flooded her. Staying in his arms forever suddenly appealed, shocking her with such a desire. When he dragged his lips from her, she became aware her arms were draped around her shoulders, her hands in his hair.

Nay, this should not be, could not be. She drew back, but stepping away hurt, for she wanted to be in his arms, have him hold her. She wanted more of those kisses.