When the Grellan kill Empathen, his son is drafted into service two years early to save him from a similar fate. Twelve years later, Soulchaser is the best of the best. When he encounters a Grellan woman by the name of Starseeker, his carefully cultivated world falls apart. She offers everything he wants and only asks his trust in exchange. Soulchaser wants to trust her, but is she what she seems? What does Starseeker hope to gain? Are his powers right or his training? Trusting Starseeker will either win him his freedom or cost him his life. 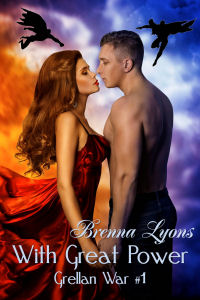 Julien stared at the woman before him. She was his own age, with auburn curls that cascaded over her shoulders. She was also naked. She was always naked.

She was so familiar that Julien could note every curve with his eyes closed, the pink scar above her left breast, and even the tattoo of the Siberian tiger on the back of her right shoulder. Julien recognized her scent, something of musk and Jasmine, and the touch of her mind. The only things he couldn't do was name her...and find her.

She strode toward him, her hips swaying in invitation. Her hand stroked Julien's rising cock through the gray cotton of his over-cover. "I knew you would come," she purred.

"Only you will see the truth," she whispered, her fingers tracing the head straining against his clothing.

Julien took a calming breath. He should stop her, but he needed information. As maddening as her touch was, he had to know why she was here, and that wouldn't happen if he put her on the defensive.

"Come to me without your unit," she requested again. She'd made that request the last three times he'd encountered her.

"Why?" Why would she want to talk to him alone? What purpose could there be in getting him isolated and unprotected?

Her blue eyes sparkled under dusty red lashes. She pulled his hand to her breast, laying it over the hard nipple.

Julien bit back a groan, fully aware that the other members of his unit could see everything his physical body did and hear every sound he made aloud. "What is your name?"

"Promise you'll come to me alone."

The softness of her breast teased his palm. She shifted, brushing the point of her nipple against his sensitized skin.

"If you promise to come to me alone, I will tell you my name."

"Next time. I will arrange it next time," he promised, already working out how he would make that happen.

She leaned toward him, laying a kiss on Julien's lower lip. "They call me Starseeker. My name is Angel."

"Angel?" She trusted Julien with her true name. Was that intended to prove that she wanted his trust, that she trusted him? Did the Grellan think there was anything special in a true name? Was it a trick? Julien wished he knew for sure. "When will I see you again?" It had been almost three weeks since he had seen her last.

The hand on his cock stroked harder. "Soon." Her essence faded away, leaving only her haunting scent to tease him.

Julien took a shuddering breath and forced his eyes open. The glass of the mirror, only slightly warmed to his touch, made a mockery of the memory of Angel's skin beneath his fingers.

He took another deep breath, separating phantom strands of Angel's scent from those of her unit, one so close to hers that the man must be a relative. A brother, perhaps? His essence spoke of youth...and of infirmity of some sort, a feeling of not being whole.

"And?" Firebrand asked impatiently. As always, his incendiary nature reached from his powers to his personality. "Come off it, Soulchaser. Give me information."

Julien shot him a quelling look, reminding Firebrand silently who the leader of their unit was. He nodded, as the new operative blushed and looked away.

It wasn't unusual for a power to forget that Julien was a unit leader. Operatives didn't typically graduate to the field until they were eighteen, and it generally took them five years in police service with human suspects until they moved on to a unit or to a position in research or administration. There, only the strongest and most capable were made leaders.

Julien had never been the typical power. Taken from his mother at the age of eight instead of ten, he'd finished his training at sixteen. He'd spent three years working the police beat before the old man let him move up to the units, but he'd been granted his own unit within two months.

Julien was in complete control of his unit. He alone chose his unit members and gave them orders, outside of the initial assignment order. It would be all too easy for Julien to replace Firebrand with an older operative who showed more control, but Julien prided himself in having the best of the best in his unit.

So, when Julien had requested Firebrand after only a year of police service, the old man had signed the order without question that the young man, only a little more than a year younger than Julien, belonged in the units where the real challenges existed.

"It was the same five," Julien informed them, easing his hand from the mirror.

Sky Master shook his head slowly. "Why would they continue to come here? Is there a traitor they are meeting?"

"No. There is no sign of any Calante here or at any of the sites. Or any human. Whatever is drawing them into the city is internal to their unit."

Sky Master stared at the deep green of the Suraden sunset through the streaked window. "Can you tell us more about the two new powers with them?" he asked quietly.

Julien ran his fingertips over the mirror, drinking in the last fibers of Angel's presence, taking them into his mind and body. He had identified Night Warrior, Sky Child, and Moon Current immediately, but Angel and her relative had evaded his usual tactician success rate for six encounters. It was unheard of, and it was a source of embarrassment for the whole unit.

"Starseeker," he breathed. "One of them is named Starseeker. The two are related. Siblings, I believe."

"Believe?" Water Demon rasped in her usual strained tones. "That is not a term you use often."

Julien took in her purple-clad body, covered in synth-cloth, as everyone in his unit was save Julien himself. Water Demon's cover was the purple of the deepest sea beds. Sky Master wore green the color of the sunset sky. Firebrand wore the blue of the powerful flames he controlled.

Their over-covers were designed for comfort and safety.

Water Demon's suit was outfitted to withstand deep-sea pressures and to safeguard her from radical changes in pressure. In addition, it circulated water over her gill slits and aerated the water for her when she was operating on land.

Firebrand's suit cooled his body, keeping his tissues from combusting when he used his powers.

Sky Master's suit was most impressive. The suit pressurized automatically when he reached altitudes that required it. At that point, the retractable faceplate would extend and provide him with oxygen to sustain him in flight. The suit monitored his physiological state and was designed to notify med-flight if he suffered suit failure. Unlike Water Demon, a failure in Sky Master's suit could be fatal within minutes. The trainers learned long ago that the ability to do something did not always come with the physical design to withstand the rigors of the act.

Julien had no synth-cloth cover. The material interfered with his powers. The trainers joked that a natural power like his required a natural environment. His cover was thick cotton fleece covered with a wool jacket that hid his lessening erection from his unit. His shoes were leather with cotton laces, and his suit fastened with a simple metal zipper.

He could wear no specialized protection, not even the Kevlar silk built into all the other operatives' covers. Julien's team was his protection.

They were also his keepers. Julien couldn't carry electronic surveillance gear as most operatives did. Even his team couldn't use comm units in an area he had to work. The comm circuits wrecked havoc with his powers, just as they had with his father.

Julien nodded, an idea taking shape. He'd never lied to his team before, but he had to learn what Angel and her unit wanted in the city, what they wanted with him. "Starseeker's essence is much like my own." It was. Maybe that was why she was naked when she came to him. "It seems...your presence disrupts the unstable strands left behind."

Sky Master shifted from foot to foot uncomfortably. "What are you suggesting? You want us to leave you here? Alone? The old man would have a fit."

That much was true. Julien immersed himself in the strands to the exclusion of all else when he was on a track. His unit was his protection. The old man was sure to balk at what Julien was suggesting.

"No. The damage is already done here. The next time we're called out, I want you to form a containment ring. I'll take in an emergency beacon, but I have to go in alone."

Yes, the emergency beacon wouldn't send out a destructive signature unless he hit the button, but would Julien see danger coming before it was too late to push that button? That would be what the old man would consider.

"Are you crazy?" Firebrand exploded. "You will be completely unprotected at your most vulnerable moments."

"The old man will never allow it," Sky Master decided.

Julien sighed. "He will. If he wants to get more information about Starseeker, he will allow it."

He pushed away an unwelcome thought. Despite what the old man wanted, Julien wanted to know more about Angel and not in any way the old man would appreciate.

Her Christmas Wolves
Brenna Lyons
In Shelf
$0.99
Tweets by
sirenbookstrand