While attending a class reunion during homecoming weekend, Karen Duncan, a 45-year-old high school teacher, meets a former student she taught in college 22 years ago. She is alone because her husband decides not to attend at the last minute. When her former student, 40-year-old Robert Goode, is unable to find a room, she allows him to sleep on the sofa bed in her hotel suit. Will Robert's romantic crush of years ago explode into a heated three-day affair? 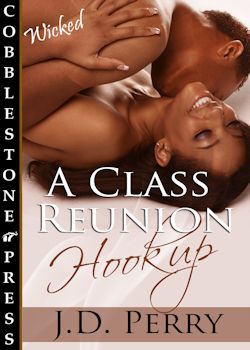 Karen Duncan sat on the edge of the examining table, alone in her doctor’s office, clothed in only a paper gown. Fifteen minutes had passed. She’d peed into the cup and given two tubes of blood. The room was chilly and quiet.

Fear danced in her thoughts. She was forty-five years old, three months separated from her husband, ten pounds overweight, and tired. What could go wrong?

Dr. Alice Clarke entered the office, reading from a sheet of paper. She was about ten years older than Karen. Her long black hair was lined with strings of gray.

“Karen, do you remember about ten years ago when we conducted those fertility tests for you and Sam, and we found that the chance of you becoming pregnant was small?” Dr. Clarke asked, smiling.

“You can forget the odds. You’re three months pregnant.”

“Fuck no, Alice! You’ve got to be wrong,” she yelled, shaking her head. In the past she’d called her doctor by her first name only when they met outside of the office. This was the first time she’d cussed in the doctor’s presence.

Now wasn’t time for a baby. She was in the process of divorcing Sam because he had impregnated a twenty-five-year-old athletic trainer from their gym. How would he react when he found out she was screwing someone else too?

She and Sam had tried to have a child for fifteen years. No condoms. No birth control. Fertility treatments. They had spent close to fifty thousand dollars to get her pregnant and nothing.

And now, after three days of fucking someone she barely knew, she was three months pregnant. No way.

“Karen, I checked the results three times. You are pregnant. I thought you would be jumping for joy,” the doctor said.

Karen saw the disappointment in the doctor’s face because of her reaction to the news.

“If this had happened a year or two ago, I would be dancing off the ceiling, but Sam and I are divorcing.”

“I’m sorry to hear about that,” the doctor said.

“Well, you do have some time to think about what you want to do. But at your age, the longer you wait, the more risky the procedure is,” the doctor said.

“What are you talking about? What procedure?”

She knew it couldn’t be Sam as she drove home. It’d been over a year since they had sex, and he’d moved out three months ago when she returned from the class reunion.

“Robert Goode,” she yelled with no one in hearing distance.

Forty-year-old Robert Goode would be the father of her child. She’d seen him once in twenty years for a weekend, and he’d impregnated her, something Sam hadn’t done after fifteen years of trying.

Just her luck, she thought.

The flight from San Diego had left Friday on a chilly October morning at six-thirty and arrived at three-thirty in the afternoon at the Raleigh-Durham Airport. She hadn’t been back in the area since she and Sam had attended the last reunion five years ago. Each year the Alumni Campus Office hosted a class reunion in five-year increments.

Karen checked into her suite in the Raleigh-Durham DoubleTree Hilton Hotel in Durham, North Carolina. It had a king-sized bed and a sofa bed. She unpacked her bags and took a two-hour nap. At six o’clock she headed to the meet-and-greet gathering in the hotel lobby.

Sam had made the reservation six months ago, when they were still communicating at least. He slept in the guest room, but they did eat together and talk about things. One of the things was their upcoming class reunion at North Carolina Central University. She wanted to come to see some of her old friends. Sam had been popular, the homecoming king, the senior class president, and the basketball team’s starting point guard. She had been his queen.

A week before they were scheduled to leave, he told her he’d changed his mind and wasn’t going. At that point she didn’t care. He’d paid for the flight and the room. She was going. And here she was.

Karen soon realized after talking with some members for the group that she and Sam usually hung with that she was unwelcomed without him. Even Janice, her best friend in college, was reluctant to talk to her.

She was about to return to her room when she heard her maiden name. “Karen Simpson.” As she turned, she looked into the eyes of Robert somebody whom she’d taught freshman chemistry many years ago when she was in graduate school.

“Robert,” she said. He was dressed in a dark blue suit and tie.

“So you remembered my name?” he asked.

Time had changed him. He no longer had the big bush and the straggly beard. His hair was cut close. He stood six feet, four inches taller than her, and had developed more muscles than he had in school. Then he had been slim. In college, Robert was good looking, and he’d improved with age.

“Not many students obtained an A from me for two semesters. And how can I forget when an eighteen-year-old boy hits on me when I’m twenty-three years old.” Karen laughed, remembering so long ago when she’d worn an Afro, gone braless, her large breasts bouncing on her chest, worn sandals, and dressed in blue jeans and cotton blouses.

“Why didn’t you go out with me?” He took one of her hands into his.

“I was your teacher.” He’d been touchy then, but she was never bothered by his touch.

“So?” he asked, giving her a sad face and then smiling.

“You were too young for me, and I had a boyfriend.”

“And I’m married to my boyfriend.” She smiled.

“When are you going to introduce me to the man who won my queen?”

“He didn’t come.” She wasn’t sure about telling him she was here alone. But why lie? He would find out later.

“So I have you all to myself.” He took her other hand in his.

“I was headed to my room.” She took a half-step back.

“Have you had dinner?” Robert asked.

“No.” She was hungry, only having had a snack since leaving San Diego.

“Let me get a room, and I’ll take you to dinner. You can tell me why you shouldn’t divorce your husband and marry me.” He laughed. 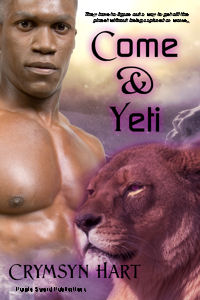