A Love Worth Fighting For

Lisa took an oath as a nurse to care for the sick and holds that tenet very close to her heart. When the man she cares deeply for, one who helped her when she needed it most, is stricken with a deadly disease and now needs her, she vows to stay by his side.

Her life tumbles in turmoil when the man she holds dear gets sicker by the day, her roommate turns vindictive, and she falls in love with a man she has waited her whole life for.

She is ultimately faced with the biggest decision of her life, stay true to her vow, or leave with the man she loves. 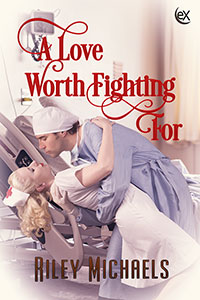 A Love Worth Fighting For

Lisa Chadwick scowled, annoyed with herself for letting critical thoughts invade her mind. She made a mental promise to accept her roommate for what she was, someone who chose the nursing profession only because it put her in contact with doctors—single and wealthy doctors.

As an angel of mercy—another term for nurse—Cathy Simms left something to be desired. Not that she was negligent. She did what was expected of her, putting in time and effort, but without much feeling.

Lisa followed her heart while she worked. It was this approach to the profession that distinguished the dedicated nurses from those in Cathy’s category.

“I was beginning to think you’d decided to work on through second shift tonight,” Cathy said with a scowl. “You know it’s freezing out.”

“You could have waited for me at the front desk, Cathy.” Lisa was doing her best to hold back her anger.

“No, thanks. I’m ready to go when my shift is over. That place has its own way of sticking with you.” Cathy visibly shivered and jerked her head disdainfully toward the hospital building.

Somehow the coarse gesture didn’t seem consistent with Cathy’s sleek, sophisticated appearance. Tall, exotically thin, with her dark hair drawn back in a ponytail, and she was always dressed in the simplest, most elegant fashion, which sometimes accounted for Cathy being late with her share of house expenses.

Cathy was more likely to express her contempt with a derisive smile, small and controlled. She could make it impossible for you to defend your position if she deemed an attack on her temper was personal. She often withheld even the smile and settled for narrowing her eyes—cold as they were black—coupled with a stern expression on her finely delineated, flawless features.

Cathy started to walk toward the staff parking lot, and Lisa increased her pace just to keep up with the long, easy strides of her roommate.

Cathy laughed, the sound no warmer than the frost-tinged wind blowing across the parking lot. “Pardon me, but I keep forgetting how you love being a nurse.”

Lisa released a weighty sigh, knowing what was coming next, but determined not to give in to her annoyance, and to save her strength for the more important emotional ordeal waiting for her at the McNair Ranch.

It wasn’t as if Lisa was any prize herself. She felt she was pretty, but she didn’t smile flirtatiously or engage in feminine flattery—like Cathy threw out so readily—unless someone made the effort first. She didn’t dress in stylish low-cut dresses that would give men something to dream about. Lisa was brisk, businesslike, and downright prim and proper.

“Just get in the damn car, Cathy,” Lisa snapped. She was cold and wanted the warmth the car offered.

“A is for Antiseptic. B is for Betty Baker or Bedpan, take your choice. In case you chose Bedpan the first time around. D is for Dedicated. E is for Exhausted, F is—” Cathy recited in haughty tones.

“I’ll drop you off at the apartment,” Lisa interrupted. She found it best to ignore Cathy’s cutting remarks.

Lisa didn’t have much to say. If she kept her attention strictly on the road, she might get through the short drive to Cathy’s destination.

She got behind the wheel of her car and waited until Cathy was belted in beside her before starting the engine and backing out of a narrow parking space barely large enough for even her tiny car.

“I’m not going home just yet,” Cathy said, turning her attention to focus on the passing scenery.

They were in Lisa’s car, a yellow Focus that Cathy borrowed with unabashed regularity—her own income always swallowed by the town’s exclusive fashion shops and expensive restaurants.

“You can drop me off downtown, at that big casino on Fourth Street. You should join me, you know I hate eating dinner alone.” Almost apologetically, Cathy added, “I don’t have a date tonight, not that I couldn’t get one, but I figured not tonight.”

You figured I’d be making dinner like I always do. And your date offers probably came from a broke intern who’d expect you to buy his meal. She caught herself just in time before blurting her true feelings out loud.

“I figured it’s not fair to leave you cooped up in that apartment by yourself all the time. A pretty twenty-something nurse, staying home with a book? That’s not healthy, Lisa.”

“I’m not staying home tonight,” Lisa reminded her and averted her eyes.

Lisa steered the car in the direction of the Virginia Street Bridge to drop Cathy off in downtown Reno to dine alone, but Lisa was sure she wouldn’t be alone long. It was the section of town permanent residents rarely visited, and outsiders gravitated to for shedding mates or money—sometimes both.

Cathy would surely attract some bored and eager male who would be delighted to pick up the dinner check in exchange for her dazzling company. Lisa’s view of the way Cathy spent her evenings was one of pity.

“You aren’t going to see him again, are you?” Cathy prodded. It seemed to be a good opportunity for Cathy to get to know more about the man in Lisa’s life.

“Yes, I’m going to see him again,” Lisa said. She saw no reason for explaining herself to Cathy.

Silence prevailed as Lisa was driving down one of the tree-lined streets in the hospital district toward downtown when Cathy revived the subject.

“I know you think I’m intruding on your personal ground, Lisa, but we are roomies, after all, and I am interested in your welfare.”

Lisa would have done almost anything to escape the scrutiny just then, short of thrusting open the door of her small little Focus and jumping out, but her choices were undeniably limited. She knew Cathy was waiting for her to take the bait, but she didn’t.