Giving It to the Man-Whore (MF)

For a long time, Melissa and Pea enjoyed the pleasures of an open relationship. They have found a life that brings them together. They are friends, lovers, along with being husband and wife, and now they’ve agreed to be faithful!

Mel is pregnant. Her relationship with Pea is in new territory, and she’s scared. They’ve promised to be together, but does that involve children?

Pea is completely, totally in love with Mel. He’ll do anything for her. Their marriage has taken them to places he never thought possible. The other women are gone, and he doesn’t miss them. There’s only one woman he wants in his arms, in his bed, and that’s Mel. He knows her, and above everything else, he loves her. He wants a family, a big one, with Mel, and he knows they’re going to make amazing parents.

Everything is working out for them, a healthy pregnancy, their marriage—what could possibly go wrong?

But nothing is ever perfect. There’s danger lurking in Sinners’ Corner, and when Mel is caught in the crossfire, can Pea get to her in time?

Giving It to the Man-Whore (MF)

More From Saints and Sinners MC

His hand moved up, and he began stroking her neck. She closed her eyes, enjoying his touch.

The movie ceased to exist for her. All she wanted was him and his touch. His hand didn’t linger too long on her neck. Down went his hand inside her shirt. She pressed her chest up against him.

In the past few years, she’d put on a little weight. She’d finally become comfortable with herself, and at a size sixteen, she was happier than she had been in a long time.

She chuckled. “You’re so romantic.”

“Do you want me to call them breasts? Melons? Fun bags?”

She giggled as he pushed her back against the sofa. “I don’t care what you call them so long as you know what you’re doing with them.”

He grabbed her shirt and shoved it up over her head so that it rested on the back of her neck. “You have no idea how much I fucking want you.”

His face pressed against her tits, and she gasped as he sucked on the flesh of her cleavage. Wrapping her legs around his waist, she pulled him against her, wishing she wasn’t wearing jeans.

His hands moved up her sides, cupping her breasts and pressing them together. He licked each mound across the lace of her bra. “I love this color on you.”

It was a pale pink, and so comfortable. The lace felt soft against her sensitive nipples. They were the only kind of bras she could wear.

He flicked the catch, releasing her bra, and she moaned as she felt free. Within seconds he had her shirt all the way off her, and her bra, too. She grabbed his shirt, pulling it up over his head, revealing his heavily inked arms and chest.

Running her hands all over him, she saw her name inked over his heart, and she loved that. Mel. Three letters making her name.

That was who she was, his Mel.

His lips wrapped around one nipple, and the pleasure and pain had her yelping.

“Just a little sensitive today.” She tried to recover quite quickly. “Could you do it slowly, and just use your tongue.” 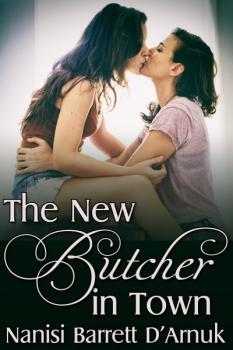