After Arsenic and Rio

Marshall Calletti has experienced many changes in his life. He's done his time and left his jaded past behind him, gone through therapy, started his own business and even bought a house with his new lover. Life would have been perfect if he could have stopped dreaming about Angelo, the man he'd almost killed over a decade ago, because in spite of all the changes, one thing had remained constant, his undying love for the enigmatic Angelo Farelli.

But just as the evil, manipulative Hal Makin brought Marshall and Angelo together years ago, he was about to bring them together again when it is learned that Hal may be up for parole. 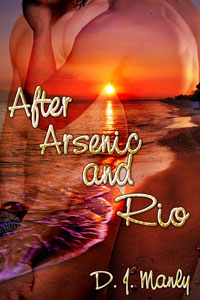 After Arsenic and Rio

Angelo checked the street signs, looking for Natalie's address. He called her this morning and she'd invited him to have lunch. Neither one of them mentioned Marshall. When he spotted the right number, he pulled up into the driveway. A very pregnant Natalie stood in the doorway.

He smiled and got out, unbuttoning his hip length black leather jacket. It had started out to be a nippy fall day, but the sun had come out now, warming it up some. He ran his fingers through his hair as the wind blew it around his head and heard leaves crunch under his boots.

He stood in front of her for a moment as she looked at him, her eyes filled with tears. "Hey, you, you haven't changed at all."

She slowly lifted her arms and put them around his neck. "Don't try and hug me too much, your arms won't fit around."

He laughed and then kissed her on both cheeks.

"Come in," she said and opened the door wider.

He followed her into the entrance leading into a nice big living room with a kitchen behind, and a hallway leading off to the left where he assumed the bedrooms and bathroom were. He was relieved to see that Marshall hadn't arrived yet. "So how are you feeling?"

"Pregnant," she replied with a moan.

He smiled again. "You look beautiful."

"You are such a liar, but keep saying it. Come, sit. Lunch is almost ready."

"I hope you didn't go to too much trouble."

"Are you kidding? It's frozen."

"You look fantastic. Are you happy?"

He looked around. "I'm doing okay."

"That's not the right answer."

She took a breath. "Marshall's not coming."

"Oh." He wasn't sure what he felt about that, a combination of relief and disappointment. "So I'm on my own?"

"He's writing something. We can read it in front of the board. It's not him, it's Roger."

"What does this Roger have to do with it?"

"They live together. They're partners...two years now. Marshall made the mistake of telling him everything a while back. Roger doesn't want him to see you."

Natalie looked at him. "Angelo. Why do you think?"