Robert is heir to a very rich empire with an enviable position in his father’s company. He hates his life. He’s always stressed and always alone. Then he starts hearing voices and a little man takes him through a passage to a place he could have only dreamed. But is it a dream or is he suddenly brought face to face with the man of his dreams, whom is deliciously and totally in his control?

Come with Robert to Fantasium, where D.J. Manly will transport you to a world where all dreams come true, even the dirtiest ones. But the question will haunt you long after you read the book. Is Fantasium only a dream?

He opened the door to the room as the end of the hallway and closed it again. "Ah, there you are, you naughty boy," he said. "I hear you gave the guards a hard time."

"Forgive me if I don't grieve."

"Have you thought about my proposition?"

"I already told you. I don't make deals."

Dylan narrowed his eyes. "What are you doing?"

"I'm taking off my clothes, then I plan to take off yours."

"Over my dead body."

"It won't come to that, beautiful, because I've figured this out. It's a dream."

"This is no damn dream," he started to struggle. "And you won't touch me."

Robert undid his pants and took them down. He noticed that Dylan avoided looking at him. He walked over and took his chin between his fingers. "Oh if those eyes could kill, I'd be dead." He laughed. "Except," he said softly as he moved his other hand down in between Dylan's thighs and pressed it against his groin, "no one can die in this dream."

"Dirty son of a…" He sputtered.

"Oh my," Robert grinned, undoing the zipper on Dylan's army fatigues. "What a nice cock you have there, little boy…or I should say," he took the pants in both hands and yanked them down. He rubbed the bulge through the underwear, then stripped them down as well.

Dylan was livid. He thrashed his body in anger, which of course made it all the more exciting.

"Look what you've done to my cock," Robert said.

"If I was loose, you wouldn't want to see what I could do to your…"

"Oh come on, Dylan," Robert said, reaching out and holding onto Dylan's cock. "Relax. I only want to give you pleasure, no pain. My God, but how big is it?"

"Oh, you will. Don't worry. I'd guess it was nine inches…ten hard, and uncut. Beautiful. They got it right, right down to that part. It's amazing. I want to see your chest." He slowly undid the buttons on Dylan's shirt.

Dylan's chest heaved a little as he glared down at him.

Robert spread his shirt open, then moved around back and ripped it up the middle.

Dylan swore under his breath.

Robert tore off his shirt, leaving only a scrap of material around his arms. "I'll cut that off later. He moved back around him again. "Nice tone, great nipples, stiff, too. Are your nipples always erect like that? You know what I notice? Your cock is stiffening. Maybe you like me a little?"

Dylan wasn't talking. He was only glaring.

"Ever had anything in your ass?" He moved around again, slapped one of the hard cheeks. "We call this a bubble butt, perfectly round, hard, so fuckable."

"God damn you," he swore, trying to look behind him.

"Eyes front forward, soldier." He laughed. "Now, where are those scissors? And there must be lots of toys around here somewhere."

Robert glanced over at the table. There was a pair of scissors and a whole box of fun stuff. He walked over and picked up the scissors. "What a great place. You think things and they appear. Now stand still, baby, I don't want to nick that beautiful body of yours." Robert bent down and cut through his pants and underwear in the middle, then he cut through the legs and threw them aside. Next he clipped off the shirt from around Dylan's broad shoulders.

"Still in a bad mood?" he asked, peering at him with a smile. He ran his hand over his cock, cupped his balls. Dylan's body reacted. Robert lapped at one nipple, then the other, twirling his tongue around, biting them gently, and he heard him utter a little sound in his throat.

Robert stood back. He smiled at him. "Let's go see what I got in the box." He took out one item at a time, holding it up, showing it to Dylan. "Nipple clamps, delicious on your nubs, love the little gold chain. Butt plug, cock ring, gawd…look at this huge monster of a cock toy!"

"You're not sticking that into me."

"Honey," Robert walked over with a couple of items in his hand. "That's just the thing. This is my dream and you, you big hunk of man with the most beautiful body I've even seen, are mine to play with. I'll do what ever I want, without consequence. This isn't real."

"I assure you, it is real," he said looking right at him. "And when I get loose from here, you'll pay."

"Oh God, I hope so." He licked his lips. "If paying means being your sex slave, I'm more than ready. But first, I must do my duty and train you. And if you don't please me, you're going to be on your knees to every weirdo who comes through here with his gold, you got it?"

"So we understand each other. Now," he smacked his lips, "I'm going to oil you down with this. You'll look gorgeous and it will make it easier to slip things on." Robert laid down the few items he had and sprayed some oil on his hands. He looked at the bottle. "Says this stuff makes you horny. Let's see if it can soften your hard skin." He placed his palms on Dylan's chest and rubbed, paying special attention to his nipples. He rubbed it around each muscle, across the waves of his stomach, then knelt to oil his cock and his balls.

Robert was satisfied to see Dylan's body trembling as he rubbed the oil into his thighs, his calves, his feet, then moved to the back to do his shoulders and down his spine. He put some more on his hands and massaged his luscious globes of his ass, then opened him up, pushed him forward and poured some onto his anus. His finger slipped inside easily and Dylan groaned.

Robert grabbed his hair, pulled his head backward and inserted his finger deeper into his ass. Releasing the hair, he reached around and massaged his oily dick, now twice the size. "God," Robert breathed. "It's got to be at least ten inches, and thick. What a cock."

Dylan's body was in motion. Robert smiled. He turned his head and kissed his lips and Dylan opened his mouth and melted his tongue with Robert.

Robert moaned now, too, letting one of his hands slide all over Dylan's slippery muscles while he fucked Dylan's ass with two of his fingers. "You like that?" he murmured against Dylan's mouth. 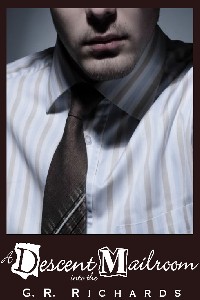 A Descent into the Mailroom
G.R. Richards
In Shelf
$2.99

Whiskers, Mane, and a Biter (MMM)
Joyee Flynn
In Shelf
$2.99
Tweets by
sirenbookstrand