All's Fair in Love and War

Only two obstacles block Shelby Donaldson’s path to success at her new job—her sizzling hot supervisor and his freezing cold attitude. Maybe her flirting got a little out of hand at first, but that’s no reason for Mr. Sighs-A-Lot to screw her over in her performance review.

Colin Montoya is not going to fall for Shelby’s sex-in-a-suit brand of temptation. He’s got her number and is not going to dial it, nor is he going to allow Shelby’s philandering brother to marry his baby sister.

After an explosive one-night stand goes awry, battle lines are drawn. But can the warring co-workers negotiate a cease-fire long enough to realize their romantic fortunes might just lie in each other? 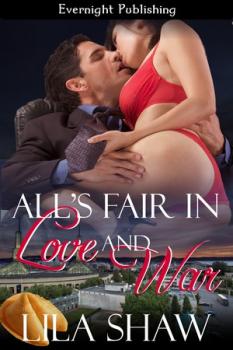 All's Fair in Love and War

Colin watched Shelby leave, baffled as usual by her flighty behavior. She was the most frustrating woman he had ever met, in more ways than one. Having to work with her for three weeks had stretched his tolerance to the limit. He was grateful to finally be rid of her, the signed performance review in his hot little hands. If only his body felt the same way about her as his head.

He rose from his chair and followed her out. He checked his watch. Nearly five-thirty. Since it was also a Friday, happy hour at the usual location awaited. Good thing, too, because he always felt like a stiff drink after an exchange with Shelby Donaldson.

Shelby sashayed around the corner to her cubicle. Colin couldn’t help but track her hips as they swayed. Exasperated with his unbidden reaction, he made a hard right into his own cubicle and collapsed into his chair. After lingering over a few last minute client details, he organized and stowed his work, then headed out.

At Roscoe's Sports Bar and Grill in the heart of downtown Portland, Oregon, Colin zeroed in on the tiny table a couple of his buddies had staked out near the foosball tables. Pulling up a bar stool, he ordered a beer then dove into the order of nachos that claimed nearly the entire surface of the table. He and his friends caught up with each other, and he shared the reason for his tardiness.

"Isn’t that her over there?" His friend and colleague Allan pointed to a table of giggly women near the bar.

Colin turned and saw several women from his firm, including Shelby.

"Yeah." He spun back around, hoping she hadn’t spotted him.

"Which one is she?" his other friend, Christian, asked.

"She’s the one in the red sweater with long dark hair parted on the side, big hoop earrings with these stupid cats hanging from the bottom, sinister blood red talons for fingernails. You can't miss her if you look for the pall of obstinacy that surrounds her, sort of like Pigpen from Peanuts with his cloud of dirt."

"The one with the nice rack?"

"I hadn’t noticed." Colin feigned disinterest, struggling to keep all inflection from his voice.

“I guess you were too preoccupied with her pus – kitties.” Allen slapped him on the back, and both friends guffawed.

If Colin were being honest, he’d have to admit that not much about Shelby escaped his attention – hazel eyes that danced with amusement at the oddest things, a laugh that contrasted sharply with her delicate features in its bawdiness. And yes, she had a nice rack, as well as nice legs and a tight little body she obviously pampered. Every square inch of her was designed to distract and lure a man to his doom. Even her infectious laughter, which cut through the din of the bar, got to him. It always had, but that lethal package was marred by a personality made of piss and vinegar when she didn't get her way. Given the inappropriateness of dating a co-worker, especially a subordinate, he was almost grateful for the fatal flaw.

Colin escaped to the bathrooms to shut out the mirthful sounds. On his return, he met Shelby in the narrow hallway. They did the obstacle dance with each other before he stopped and stood to one side. As she nodded then passed, he got a whiff of her perfume, the same scent she wore every day. Over his shoulder, he watched her walk away before he continued back to his table, shaking his head. He absolutely hated how she turned him upside down.