The last thing Caleb Slattery wants is to spend the summer as the law on Pyrate Island. That is, until he meets wolf shape-shifter Goldie Pyrate. He is instantly pulled toward the woman who keeps the truth of her life from him until it's too late and she has claimed him as her mate.

Goldie falls for Caleb at their first meeting on the ferry to Pyrate Island. Not sure how the alpha human will take the news, she hesitates in sharing that not only is she a shape-shifter, but also the alpha-to-be of the Pyrate pack.

Can she convince him to submit to her authority when they are with the pack? Can she fight her own dominant tendencies and submit to him in bed? Can they work together to keep the pack's secrets from being discovered when someone trespasses on the pack's private lands?

5 STARS: "Caleb does not want to patrol Pyrate Island for the summer. There is no action there, and he is a cop who really likes action. Was he wrong??!!! There is plenty of action for a lawman on the island! Goldie is an alpha shape-shifter, and she knew Caleb was her mate from the first time she saw him. Since he really has nothing better to do, he spends him time pleasing Goldie. He just has a hard time realizing that she is alpha in her pack and in her romantic relationship. I love short erotic stories like this! They get to the point with great characters, a steamy plot, and unforgetable sex. This is a winner!" -- Stephanie Rollins, Book Reviews R Us

5 CUPS: "Goldie is next in line to be alpha of her pack and has never sensed her mate. Annually, a deputy comes to Pyrate Island for the tourist season, but this year is different. Her mate has arrived. Deputy Caleb feels a summer spent at Pyrate Island is a waste, but the sheriff tells him to see it as a vacation, which he desperately needs. A shot from the hip kind of guy, he is shocked by his reaction to Goldie, and her explanation is bewildering to say the least. As a new alpha, Goldie is unsure about how an alpha male can handle her predominant position in the pack. Caleb has a serious need to be in control, at least part of the time. Together, they must discover if their two worlds can mesh and whether Caleb can take his place on the island. Goldie is an unusual paranormal story in that no one runs for the door, trying to escape. Caleb is levelheaded enough to weigh the good with any perceived bad. It is refreshing to see the female as the alpha, which happens so little in shifter series. Come along to see if Caleb can accept his place and potential mating with Goldie." -- Delane, Coffee Time Romance & More

4 STARS: "Goldie by Cooper MacKenzie is the first book I have read by her, and I will definitely be reading more!! This book is a quick read full of hotness!! Caleb Slattery is less than thrilled when he is sent to Pyrate Island for the summer as the Island law official, until this beautiful woman comes up to him on the ferry and turns his word upside down. Will he be able to deal with all of her secrets? When Goldie Pyrate goes along with her cousin for a routine trip to the mainland by ferry the last thing she expected was to find her mate among the passengers. How is she supposed to tell this alpha male what she is and that he will have to submit to her as the packs alpha in public? When these two get to the island they are an almost non stop bunch of hotness! I absolutely love the fact that although part of Goldie wants to submit to Caleb her wolf takes over to try to wrestle for control. This is a perfect quick read! I can’t wait to see where the rest of this series takes us! I hope y’all enjoy this one as much as I have." -- KC Lu, Guilty Pleasures Book Reviews

As soon as their lips touched, the barely controlled fire between them roared out of control once again. Goldie’s need to claim her mate had her humping her hips against his thigh while damning the clothes that separated their bodies.

Caleb’s hands slid between their bodies, forcing her to take a half step back. She took a deep breath through her nose to try and rein in some control. Though their lips remained locked together with tongues dueling, her hands moved down his body and began to work the fastenings of his shorts.

At the same time, his hands pushed up her shirt then pulled at the snap of her skirt. When the small disk refused to part, he slid his hands around her waist and down to the hem of her skirt. He pushed the back of her skirt up until he could cup the cheeks of her ass. She smiled at his quick intake of breath when he found them bare. His fingers then roamed until he felt the strip of lace that traveled between the globes of her ass to the thong’s waistband.

“Mmmm,” he groaned into her mouth as he plucked at the thong. “Sexy.”

Once she eased his zipper down over the fullness of his erection, she grabbed the material at the sides of his shorts and shoved them down. She released them once they were below the curve of his perfect ass. Then her hands roamed back up his butt and hips now clad in only a pair of loose, soft cotton boxers.

Sliding up to the elastic at the top, she pulled the front of the boxers out and slid one hand inside, wrapping it around his cock just under the head, earning a deep-throated groan from Caleb. She worked the boxers down until they, too, fell to the floor.

Though she wanted to drop to her knees and study his impressive-feeling cock before giving him a blow job he would not soon forget, Caleb had other ideas. Before she could kneel before him, he pushed her skirt farther up her body.

She jumped when he jerked on the thong’s waistband, snapping the thin lace before pulling it from her body. Then his hands slid over her ass cheeks to cup them before he lifted her up his body. She shivered as his long, thick, silky erection brushed against her lower lips.

Breaking the kiss, he lifted his head and stared at her. His blue eyes glowed silver as they stared deep into hers.

“Wrap your legs around me and hold on tight,” he ordered softly.

“So wet,” he murmured against her lips.

His touch of his fingers left her to be replaced a heartbeat later by the brushing of the tip of his cock up and down between her pussy lips. She gasped each time his cock brushed over her knotted-up clit. Juices gushed from her pussy, wetting his tip, which he then spread up and around her entire center.

She thought she felt him walking, but could not imagine how he had any ability to move. All she could think about was impaling herself on him and riding his cock until the itch that had taken over her mind and body subsided.

She sucked a small breath when a cool, flat surface pressed against the length of her back. So, he was not as steady as she originally thought. Still, his ability to remain on his feet while holding her showed he was in better control of his body than she was of hers. Her wolf was clawing for its freedom, the need to claim its mate driving her out of her mind almost as completely as the need to fuck this man.

She loosened her hold around his shoulders, intending to slide down his body and impale herself on his cock. The only problem was that he held her pinned high against his chest as he continued to tease her with just the tip of his cock.

“Please,” she begged against his lips. She continued squirming and trying to capture him.

“Shhh, baby girl. No need to beg,” he said, his voice deep and soft as he lowered her just enough for the top half of his cock to breach her entrance before stopping again.

“Please,” she repeated, unable to finish the request. What she really wanted was for him to slam his thick length deep and fuck her into the wall.

He lifted his head and smiled down at her as he lowered her another inch. When she growled in frustration, he shifted her down his body another two inches.

“Feel better?” he asked, sounding as if he was near the end of his own restraint.

“No,” she growled between gritted teeth. “Fuck me into the damn wall. Make me yours.”

As if her words cut the last threads of his control, Caleb lowered her onto his cock until he filled her completely. Goldie dropped her forehead to his shoulder as her hands clenched into fists behind his head. She kept her eyes closed to keep him from seeing that her amber-colored eyes had shifted to bloodred. Her canines dropped, and she fought the near-explosive need to claim her mate.

She began to pant when his hands gripped her hips tighter and he began to move. He pulled out of her until only the head remained inside, then thrust fully into her again. He moved slowly, holding his cock deep inside her for a heartbeat before repeating the move again and again.

With each increasingly hard and fast stroke, Goldie’s need to claim grew as her arousal mushroomed out of control. She lifted her head, pushed aside the collar of his shirt, and licked at the spot where shoulder and neck came together.

He made a sound from deep in his chest as his hips began to move even faster, slamming home. Finally, she could not take the gut-clenching anticipation any longer. With one last lick of his salty skin, she bit into his shoulder and sucked hard. 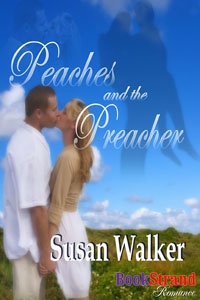 Peaches and the Preacher (MF)
Susan Walker
In Shelf
$1.50