Still reeling from the near-fatal car crash that rocked their world only a week previously, Madigan and his guardians are struggling to come to terms with the very real possibility of death that the hunters promise.

They team up with a fallen angel and his two lovers in order to make it to sanctuary and a place of safety so that all of them can recover from the mental and physical stress that this conflict with the hunters has caused. The newly formed family is threatening to fracture under the pressure, and it will take all of them together to come to a place where happily ever after is within their reach.

NOTE! You are purchasing Siren's serialized imprint, the LoveXtreme Forever Series. This is Book 3 of the His Guardian Angels collection. These books are not stand-alone. Each is a continuation of the previous book and must be read in the numbered order. Each book may end on a cliffhanger but usually with a happy for now for the beta hero and one or more men. The final book contains a happily ever after for the beta hero and all his men.

4 DELIGHTFUL DIVAS: "Angel Kin is a wonderful continuation of the story begun in Angel Bound by Jana Downs. New friends and interesting developments abound for Madigan and his Angels. After almost losing two of his angel mates, Madigan knows heading to sanctuary is their only option. Madigan is determined to keep his family together and safe. If that means starting over in a new town, then that’s what they’re going to do. Between the hunters and new friends, Madigan and his Angels must keep the faith to survive. I look forward to reading more of this series and more by Jana Downs." -- Samhain Queene, Dark Divas Reviews 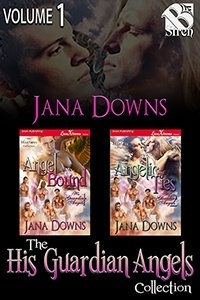 Yuri shouted as pain fired through his right side, forcing him back to his stomach. “Motherfucker!” he cursed, rage blinding him. He wanted to tear something apart!

Madigan’s hands cupped his cheeks, forcing his attention from his own impotence to his lover. “You are going to get better because I want you inside me, Yuriel. I want you to fuck me through the mattress, and I want you stretched by Dex when it happens. I’m going to have him run his hands all over your wings and have you come so hard you’ll see stars. I’ll even throw in a free peep show by having Michel between a Cross and Bren sandwich for you to look at. It’ll be worth the wait, but you need to concentrate on getting better and less on what you can’t do right this second. Okay?”

Yuri took a deep breath and nodded. “Okay.” Their lips met once more, a chaste kiss this time.

Madigan released him and sat on the bed beside him, picking up one of the pastries as he did so. “You want to try and eat for me?”

“Yes,” Madigan and Dex answered in unison. There was no winning with the two of them. Reluctantly, Yuri opened his mouth for a bite.

The first taste was pure heaven as always, and it seemed his rioting stomach had calmed down after Yuri had gotten his kiss from Madigan. Madi was a great baker, and he spoiled his angels rotten with the sweet treats he made almost daily. Madigan had made it a point to make their favorites on a rotating basis so that each night, one of the guardians got to choose what the sweet treat of the day would be.

“Do you think that it would be possible for me to do what I did to Cross to Yuri?” Madigan asked Dex as he fed Yuri out of his hand. Yuri didn’t mind. He rather enjoyed having Madigan pamper him a little. It was the favorite part of his God-forsakenly boring day.

“You are a son of Raphael. It is more than possible, Madigan. It is probably in your skill set to be a healer. I wouldn’t doubt for a second that you could heal him. The powers are unpredictable because you haven’t matured fully as an angel. Once you have, you’ll be able to call that sort of power at will. Over the next year, an entire new world of possibilities is going to be opening up for you. You’ll see and experience things that you never thought were possible. More to the point, you’ll get your first set of wings, which is always exciting,” Dex said with a smile in his voice, obviously recalling his own forays into angelic maturity.

“I’m really going to get wings?” Madigan asked. Yuri could practically see the excitement thrumming through the other man. He almost bounced with the force of it.

“Of course,” Yuri answered before Dex. “You’ll probably have the same color wings as your father. They’re really lovely.” He looked at Dex and winked. “Of course we’ll have to get you some ink to put on your back so that you’ll be able to put them away and remain in the human world.” He opened his mouth and received another chunk of pastry. “Wait until you start flying with us, baby. The wind in your face and dancing with your lover in the sky is the most exhilarating experience an angel can wish for. It’ll be so much fun when you’re able to come along with us.” If I can still fly. Yuri’s thought sent him spiraling back into a glum mood. The way and manner of  which he was healing was calling into question whether or not it would ever happen. Wings were delicate things by nature, so it could be entirely possible that he would never fly again.

Madigan’s fingers brought another piece to his lips, and Yuri declined it. Madigan frowned. “I won’t fly until you do, Yuri. We’ll fly together.”

Bren must’ve sensed it because he almost immediately backed off. Madigan paused over Cross’s hard cock, and Bren lent a hand by keeping it steady as Madigan sank onto Cross’s hot rod. He gave a sigh of contentment at being filled, but it still wouldn’t be enough. Cross shifted beneath them restlessly. Madigan knew he wanted to fuck, could see it in the straining muscles in his neck and shoulders, but Cross waited for Madigan to take the lead he’d been given by his men’s deferral to him. It was a heady power. He turned his head.

“Bren, I want you inside me, too.” Everyone froze for a moment and stared. A low blush rose on Madigan’s cheeks that he felt with a rush of heat. He licked his lips. “Please?” He jumped as Bren snarled something that sounded like “sexy imp” and gave his hands a generous dollop of lubrication before coating the entire length. Cross groaned, and his hips started moving almost of their own accord as the instinctual need to move, to fuck, overcame the civilized parts of his brain.

He stilled only when Bren’s cock slipped in beside his own. Madigan let his breath out in a hiss as two cocks worked their way into his tight channel. God it feels so good! The sensation of being stuffed to the point where pleasure met pain and “good” and “too much” were right beside one another was one that made his head swim. It took everything in his power not to lose it and give in to the beast of lust that demanded he sate himself immediately. It would take two strokes to his oversensitized prick at this point to get off.

“Ready for us to move?” Cross’s strangled voice still tried to sound civil but just came out as sounding like a man desperately approaching the edge of the abyss.

Madigan gritted his teeth to keep from giving the affirmative. “Not quite.” He tried not to sound as breathless and worked up as he felt when he called out, “Michel, get over here.” He could’ve asked nicer, but he was beyond the point of caring about how something sounded. He wanted, and his nephilim side was singing its triumph like hallelujah bells at church.

Michel climbed over to Madigan’s side and pulled Madigan into a kiss. Madigan gasped as both of the angels inside him couldn’t seem to resist fucking forward a few times at the visual. Madigan was all but writhing as he whimpered into Michel’s mouth. He pulled back by sheer force of will. He wanted his fantasy, and they were going to give it to him.

At the words, Michel scrambled to straddle Cross’s lower chest. He used the headboard to balance as Madigan brought Michel’s hips back so that he could sink down onto Madigan’s steadily leaking prick.

“God, yes! Sweet Lord, right there. Fuck!” He didn’t know which way to turn. His entire being seemed to be a bundle of nerves, and the three-hundred-and-sixty-degree sensation made Madigan sure his head was going to explode at any moment. Oh yes, they would definitely be doing this again. His body was quickly spiraling out of control. As good as all this felt, it was impossible to maintain for any length of time.