Band of the Goddess

Band of the Goddess

King Kallim Silga-Orrenga sat at the main table and surveyed the long line of hopeful women waiting their turn to see if the Goddess would chose them as his bride. He tried to not let his boredom and frustration show. He knew his time had run out.

A vow had been made five years earlier and it was time to follow through on that promise. If the Band of the Goddess did not select his wife tonight, he would have to agree to an arranged marriage. His father before him had made the vow and, although he knew his parents had been happy, he also knew it wasn’t a marriage that had been sanctioned by the Goddess.

He didn’t want an arranged marriage; he wanted the all-consuming love his grandfather had for his grandmother. She had been one of the chosen. Was he wrong to want the same for himself?

Princess Nahlia caught his eye and gave him a knowing smile. She was stunning, with long dark hair and large green eyes, but his body didn’t stir when she made her intentions known. He tried to imagine an arranged marriage with Nahlia, but couldn’t see a happy life that included her. Sure she had the right bloodlines, the right connections, and she knew how to be a queen, but he yearned for more.

Nahlia was in line, waiting for her turn to try her luck to see if the Band of the Goddess would accept her. The Band had rejected her four years running and he couldn’t help wondering why she kept trying. The Band would only choose the most worthy candidate. The chosen would, above all, match the King in both temperament and spirit. One by one, the women held their wrist above the Band. There was no reaction.

Finally, Nahlia stood in front of him. “Greetings, my King,” she said as she fell into a perfect curtsey. She pulled back the sleeve of her expensive hand-stitched gown, held out her slender wrist, and waited. Nothing happened. She pushed her wrist onto the Band as if she could will it to respond, but it remained a dull circle of gold.

He caught the flash of fury on her face before she could mask her reaction. “My King,” she said, as she gave another bow, then walked back to stand beside her father.

Looking around the room, he felt his chest tighten. He felt trapped. But he had made a vow and his word was law; he must follow through. Preparing to stand to make his announcement, movement on the banister above him caught his eye. He was too slow to react when a hooded figure dropped the two meters down to land behind him, grabbing him by the throat. The cold sting of steel digging into his neck convinced him to remain still.

He couldn’t see who was behind him but he knew it couldn’t be an assassin or he would already be dead. Panicked words from the guards had him blinking in surprise. If what his men were saying was true, it was a Grey who held him in a tight grip. What would such a person want with him? It was rare to see a Grey anywhere near the kingdom. Out of the corner of his eye, he saw the gold on the Band twinkle and move as if alive. It couldn’t be, could it? After five long years of dreaming for his chosen one to appear, had the Goddess finally granted his wish? He didn’t understand why the Goddess would send him a male for a bride or a Grey, but he had absolute faith that the Goddess knew what she was doing. It wasn’t his place to question her motives. He stared at the Band, willing it to respond, almost shouting when he saw it move.

“Everyone shut up or I’ll slit the King’s throat. I want my kinson brought here now.” The Grey spoke in a voice that was smooth and musical despite the threat behind his words. It was rumored that the Greys sang songs of war before they entered a battle and hearing him speak, Kallim could believe it.

Kallim licked his lips before he could speak. “Forgive, me sir, but what is a kinson? I have never heard that word so my men may not know of whom you speak.” Kallim spoke as the blade bit into his exposed throat, leaving a small cut.

“Kinson are the children of my brother. No stalling, you have four of my kinson, and I want them returned to me unharmed.”

Kallim frowned. He was unaware of any children being taken by the guards. “Master of Arms, do you know of whom the gentleman speaks?”

Aamos, the Master of Arms stepped forward. “Yes, my King, four Greys were foraging in the forest. Since they broke the law, they are in the dungeon. I was going to let them free at first light tomorrow with just a warning. They have not been harmed.”

The Grey behind him moved forward until his body was pressed against Kallim’s back. The movement brought the Grey closer to the Band. The gold rippled as if excited.

Heart beating loudly in his chest, he made a decision. “I wish to make a deal. You try that Band on,” he said, pointing to the Band of the Goddess, “and I will guarantee your safety and that of your kinson. You will be permitted to leave with no consequences. I give you the word of the Anaxion King.”

A rumble of discord came from his people as they realized the implication of his proposal.

“It’s blasphemy. You can’t possibly allow a dirty Grey anywhere near the Band of the Goddess, not to mention he’s a man,” Princess Nahlia screamed in outrage.

“I am your King and it is my decision. The Band has the right to choose,” Kallim roared.

“Why should I take your deal? I could just slit your throat, little King, and then take my kinson,” the Grey asked, as if Nahlia had not spoken.

“Because this is the safest outcome for everyone. You have held a blade to the throat of the King. That alone would sign your death warrant. Please accept the deal. And I am far from little,” he argued. Kallim was over six feet and was considered tall among his people.

“To me you are but the pony to the stallion, little King. But fine, I accept the deal, but I want to see my kinson first,” the Grey demanded.

Kallim signaled to Aamos, who rushed to do as directed. “While we wait for the children, would you tell me your name? My name is King Kallim Silga-Orrenga.”

The body behind him shifted, but the dagger at his throat didn’t move. The rustle of clothing had Kallim intrigued. Was the Grey clothed for combat? He wanted to turn and look at the Grey but he didn’t dare.

“What’s in a name, little King? Will it matter what my name is, if I slice through that thin neck of yours?”

“Names are important. They let people know who you are. How would your people identify you if not by name?”

“The markings on my arm tell the story of my lineage. The first row are the markings for my father’s house. The second represent the house of my mother. The third are the markings of my house and the fourth will be where my mate’s house is displayed. Names are not needed when who I am is on display for all to see. But if you must use a name, I go by Armel. It means bear.”

“And do people call you Mel?” Kallim asked, wanting to know more about the man who held a dagger to his neck.

“So what do they call you?”

Before the man could respond, there was a disruption in the hall as four children aged somewhere between twelve and fourteen entered the throne room. There was no mistaking them for anything other than Greys. They were much taller and stronger than Kallim’s people. Their long hair was a deep dark blue, so dark it was almost black. As was tradition, the hair was woven with strips of colorful cloth into numerous braids down their backs. Kallim looked at their eyes and noticed the deep grey color that gave their tribe their name. No Grey had ever been found with eyes of any other color. Upon seeing him, the boys fell to their knees.

“My Lord, forgive us. My kinson and I were hungry and we disobeyed your orders,” one of the boys said, his eyes downcast.

Kallim was surprised to be addressed so respectfully by a Grey and was formulating a response when Armel spoke.

“You were young and foolish, my little cub. Stand with your kincousins.”

With a start, Kallim realized they had been addressing the person behind them as their lord. Who was he?

Kallim felt the body behind him lean in closer. Then musical words were spoken into the shell of his ear.

“Okay, little King, carefully reach for the Band and slip it over my hand.”

Kallim shivered as Armel breathed the words. Leaning forward he picked up the Band and noticed the usually cold metal was warm to the touch. Once Kallim had the Band, the Grey held his wrist out in front of him. Kallim paused, bracing himself for what was about to happen. Was he really going to put the Band on the man’s wrist without telling him the consequences?

“I’m waiting, little King, be done with it. I tire of this place.”

Kallim held his breath as he slipped the gold metal over the large hand and it settled on the thick wrist. The reaction was instant. A high frequency hum filled the room and the Band rippled. Bending and shifting, it became a wide masculine Band that sat firmly around Armel’s wrist. In awe, Kallim saw an outline of a bear on the smooth Band. Each Band was unique to the chosen one and formed a shape that best represented the wearer. Aside from a small flinch that Kallim felt from the body behind him, Armel gave no indication that the reshaping of the Band had distressed him.

“Okay, little King, now remove the Band so we can leave.”

“I can’t do that. I’m so sorry, but I can’t,” Kallim said, even though he wasn’t sorry at all. This man was his chosen and he wasn’t going to let him walk away.

“And why is that, little King?”

“Because my King, by the laws of my people you have just become my husband and only the death of one of us will cause the Band to release its hold.” 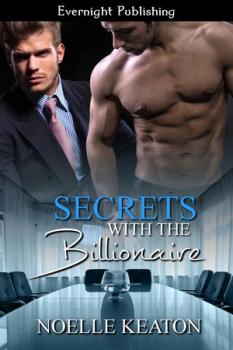 Secrets with the Billionaire (MM)
Noelle Keaton
In Shelf
$3.99