Born into the world as mere chattel, Carrie Scott rebels against the oppression women are dealt in 1897 Philadelphia the only way she knows how—by hiding under layers of black mourning clothes worn for a fiancé she respected, but did not love.

Freedom from marriage’s auction block allowed her the quiet she needed, but the lonely life eventually made her body yearn for more.

Dr. Matthew Gibson was floored to see his best friend’s little sister standing in his office, now the full-fledged beauty he’d always expected her to become. But the fact she was asking to be treated for “female hysteria” made his fingers itch to touch her and claim her as his own.

Neither knew that the one afternoon in his office would change their lives forever.

Publisher Note: This is a re-release of Being Improper. The author has deeply edited and added an additional 10,000 words to the original story.

“Adley finally convinced him to stop working for a few days so she could whisk him away for a holiday? Good for her.” The smile he gave was breathtaking; the small crinkles around his eyes lovely. Matthew smiled with his whole face and one was lucky to be the focus of that humor. “So, Miss Scott, why are you here to see me today?”

Taking a deep breath— as deep as could be in her blasted corset— Carrie tried to calm her nerves. She sat down on the edge of the thick leather armchair across from his desk. Sunlight streamed across the room, creating a halo of sorts around Dr. Gibson’s head, making his face nearly impossible to see. It somehow made the words easier for her to speak, not being able to clearly perceive his face.

“Mrs. Granger came to visit me last week…and told me of…a procedure…you perform here in this office. She says it…helps her. Relieves her in some way. I believe she told me she suffers from… female hysteria.”

Carrie paused, unable to continue without knowing he’d heard her words. She needed a response from him before she could continue, but he sat there, unmoving. Carrie wasn’t even sure he breathed he was so still. Long seconds passed, it felt like hours in the silence of the room, but could have not been longer than a minute.

“You know that I cannot discuss Mrs. Granger’s medical history with anyone. It would be against my oath as a doctor.”

“I’m not asking you to discuss her treatment. She has been rather candid with me herself. But—”

“After speaking with her…I fear…that perhaps…I, too, suffer from this female hysteria.”

She waited for his response, some form of validation of her concerns. Carrie was embarrassed beyond belief to speak aloud all of her rambling, wicked thoughts—to him, this beautiful man who had sat at her father’s table and broken bread with them. A man who had seen her as nothing but a child for years, and here she was, asking for help, help to quell the maddening voices in her head, and ease the suffering of her woman’s body.

“And why do you think you suffer from this malady?”

“Well, I’m often feverish, my skin feels… too tight at times, like I might burst at any moment. And I have thoughts no lady should have.”

Heat filled Carrie’s already hot face as she considered the thoughts she’d just had in this office, how she had enjoyed the sensual nature of his voice and let his tenor rumble through her. She felt that heat elsewhere, as well, lower, deeper. A wetness coated her quim, making her all the more uncomfortable. “It isn’t anything a real lady would say aloud.”

“But I’m a doctor, and I can’t determine if you truly suffer from this malady unless you’re completely honest with me. I need to hear it, Miss Scott, so tell me what unladylike thoughts you’ve had.”

Carrie fidgeted with her gloves, looking down into her lap. She’d been unprepared to divest herself of all the wicked thoughts she’d had over the past few months. Summoning the courage, she decided to offer some of the least offensive cravings she’d considered. “I was just standing at your window, imaging myself running barefoot across the park, my hair unbound and flying behind me as I raced.”

“Is being free of the damnable corset so terrible a wish?”

It wasn’t, not truly, but it was most inappropriate. His question was almost a challenge, making her dig deeper. “I’ve sat in my family’s parlor and thought of taking my corset and burning it in the fireplace. I’ve thought of taking my clothes off and jumping into the pond behind our orchard when the moon is full and bright, shining through the trees, completely naked. I’ve thought about—”

Dr. Gibson leaned forward, his hands steepling on the desk as he rested his elbows on the wood. His face was still in shadow, and she was glad. He was anonymous, as if he really was not there. She thought of the Catholics and their confessionals, and wondered if any of the women had ever sat in the darkened little closets and told the priest they had the unclean contemplations of touching their bodies. “And have you performed any of the acts you’ve imagined?”

Carrie gasped. “Of course not, no polite lady would.”

“Especially one in mourning.”

Looking down at her black bodice, she felt even worse for her thoughts, wondering if she would have ever truly been a suitable wife to Paul. Her thoughts were so random lately, and her body felt as if it belonged to someone else at times.

“Why do you still wear black, Carrie?”

She lifted her gaze quickly at the use of her given name, his tone not appropriate. Yet she loved the sound of her name crossing his lips, and her body tightened as it whispered again and again through her mind.

“Will you not answer my question?” he asked her after a moment.

She had been so lost in thoughts of him whispering her name as his lips trailed over her naked flesh, she’d forgotten the question. 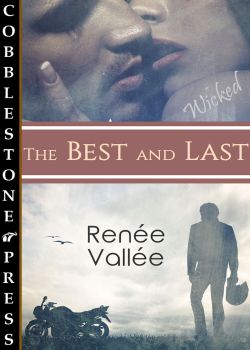 The Best and Last
Renee Vallee
In Shelf
$2.99