When Victor Hill bought a house with his boyfriend, Jian Kouri it was a dream come true. But now, two years later, instead of living their happily ever after, they hardly see the other awake.

With Jian out the door before Victor gets up in the morning, and asleep on the couch nearly as soon as he walks in the door, the life Victor imagined couldn’t be further from reality. They don’t talk; they don’t touch, and Victor fears he and Jian have already drifted too far apart.

The holiday season is a time for hope, but when Victor comes home to find Jian with a plan to woo him for Christmas, is it too little, too late? The dates are great, and there are filled with Christmas fun to get Victor in the right spirit for the holiday, but are they enough for the two of them to fall in love again? Or is there just too much in their relationship that needs fixing? 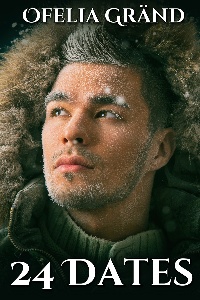 “No more dates, Jian.” He sipped on the coffee and glanced at him. “At least not in the morning.”

“Come on, babe.” He rustled a paper bag in front of him, and Victor narrowed his eyes.

He remembered the avocado sandwich Jian had made him for the ride and perked up a little. “Can’t I have it now?”

“Nope. I need you to get out of bed, put on a pair of sweats and a sweater.”

“Sweats?” What kind of date involved sweats? “Should I shower?” Jian hadn’t. His hair was a mess, and the dark stubble could soon be called a beard. Victor loved it when he grew it a little rugged.

Victor scrunched his nose and took another sip of the coffee. “I’m not sure I like the sound of that.”

Jian chuckled, and it had a wicked ring to it. Victor’s nerves woke up. “Jian! Where are we going?”

“You’ll see. Get your sweet ass out of bed because we’re going in five.”

Victor growled, took another sip of the coffee, and stumbled into the bathroom. Seven minutes later, he climbed into the truck, accepted the thermos cup Jian had prepared for him with more coffee, and the bag with the sandwich. As they rolled out of the driveway, Victor looked at him. “Are you gonna tell me now?”

Jian grinned and shook his head. The soft sounds of Christmas music filled the tinsel-decorated pickup and the tiny Christmas tree glowed on the dashboard. Outside the streets were mostly deserted, the snow was white and glistening.

When Jian turned north instead of toward Courtland or Whiteport, Victor frowned. North? What the heck could they do north of Northfield? Skiing? He hoped not, he’d break a bone or two hundred and six.

Jian raised an eyebrow at him.

“Oh, come on, we’re on the way, you might as well tell me! Communication is a good thing, Jian.”

Victor narrowed his eyes. “Where are we going?”

“Snowmelt.” Jian drummed his thumb on the steering wheel, a grin tugging at the corner of his mouth.

Snowmelt? There was nothing in Snowmelt ... except ski slopes. “I’m not skiing.”

Jian nodded, his face might’ve held a blank expression, but Victor knew he was laughing at him.

Victor blew out a breath. He wasn’t looking forward to sitting in a bar while Jian was out skiing. He could drink alone at home -- he never did, but if he had, it would be considerably cheaper.

For the most part, pine trees lined the road, not giving Victor much to look at other than Jian. He didn’t mind, he loved looking at Jian. He wasn’t classically handsome, but Victor loved the bump on the bridge of his nose and the dark, dark eyes where you could hardly see where the iris stopped and the pupil began. Though, he couldn’t look into his eyes when he was driving. He loved the black stubble against the olive-colored skin that grew darker in the summer.

The morning sun was streaming through the now thinning trees, giving warning about civilization up ahead, but before they reached Snowmelt, Jian turned left.

“What are you doing?” There were no ski slopes down there. The mountain was on their right.

“I hate you a little right now.”

Jian nodded. “It’ll get worse before it gets better.”

Jian pursed his lips. “I don’t know if pleasant is the word I’m going for today.”

Victor took a deep breath but kept his mouth shut. Jian turned in on a small gravel road and followed it for a couple of minutes before he parked in a three-car wide parking lot that had been cleared of snow. Pine trees surrounded them and silence descended in the pickup.

Jian gave him a serious look. “In Snowmelt.” He opened his door, walked around the pickup, and grabbed a bag from the back.

Victor followed, his heart thudding more rapidly than it should on a Saturday morning. A few seconds later, Jian led him out on a jetty where a man dressed in thick winter clothing waited for them. He grinned and shook Jian’s hand.

“Jian?” Victor stared at the rectangular hole in the ice of the lake. “Jian, what are we doing here?”