Arnie Whitehall finds a stray dog during a snow storm and brings her home, where she promptly gives birth to eleven puppies. Over his partner Jason Feldman’s objections that they’re breaking their lease, Arnie is determined to keep Mama and her brood.

Arnie feels an instant attraction to Dr. Collin O’Connor when he takes Mama and the pups to the vet’s. Although Arnie resists, it soon becomes obvious the feeling is mutual. And where’s the harm? Arnie and Jason have become more like roommates than boyfriends over the years.

Will Arnie, Mama, and her babies be left homeless when their landlord finds out? Or will Collin come to the rescue and offer them a home and much more? 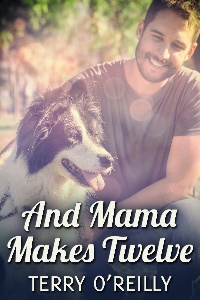 Arnie carried a laundry basket full of puppies into O’Connor Veterinary Services, followed by Mama, who was sporting the new purple collar and leash he’d picked up that morning at the pet store.

He was greeted with a chorus of ohs and ahs as he walked up to the counter as the pet owners of the dogs and cats waiting to be seen by the vet saw and heard what he was carrying.

“How many are there?” a woman with a shih tzu on her lap asked.

“Oh, my!” another woman with a cat carrier exclaimed.

“May I help you?” a pretty, young woman behind the counter asked as she approached. Then, upon seeing the basket, she said, “Oh, you must be Mr. Whitehall, and these are the puppies you rescued.”

There was another murmuring of approval from the waiting room.

“I’m Liz. We talked earlier. Follow me. Let’s get these newborns away from any potential exposure out here.”

Liz came around the counter and led the way through a door into a hallway, Arnie with the basket of puppies, and Mama, trailing behind.

“Wait in here,” Liz said, indicating an exam room. “Dr. O’Connor will be with you in a few minutes. Oh, they are so cute!”

Arnie entered the room. As he did, he caught a glimpse of a woman with long red hair, wearing a white coat. A stethoscope hung around her neck. She was entering another examination room. He was surprised when a feeling of disappointment swept through him. Arnie guessed he’d assumed Dr. O’Connor would be a man. But why do I feel this way? What difference does it make if he’s a she?

His thought was interrupted when Liz asked, “Can you give me some details of how this all came about, and what you’ve done so far with the puppies and Mama?”

Arnie reiterated the story. Liz took notes on a clipboard. When she was finished, she gave Mama a warm hug, enthused over how beautiful the babies were, and left Arnie to wait for the red-haired Dr. O’Connor.

The pups were getting restless, which in turn made Mama anxious. Arnie poked around in the cupboards and found one with blankets in it. He retrieved one and spread it on the floor. Mama immediately began inspecting her babies as one by one Arnie took them from the basket and laid them on the blanket. He smiled with pride as she lay down and the puppies tussled for a spot at the lunch counter. Arnie made sure little Trixie wasn’t going to be left out.

As he sat back to watch the pups nurse, he heard the door open. A deep male voice said, “So, you’re the rescuer.”

Arnie turned to see a very handsome, dark-haired man who squatted down beside him.

“You must be Mama.” The man reached out and let Mama sniff his hand. Her tail wagged. He petted her head.

“Mr. Whitehall, I’m Collin O’Connor. It’s nice to meet the hero who saved this pretty lady and her babies.”

He held out a hand. Arnie took it and let the relief that the white coated woman he’d seen earlier wasn’t Dr. O’Connor wash over him. 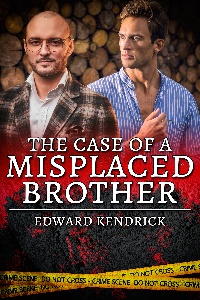 The Case of a Misplaced Brother (MM)
Edward Kendrick
In Shelf
$3.99
Tweets by
sirenbookstrand