Detective Brady Lindstrom deals in death, and not just because he's a homicide cop with the slaughter of a century to solve. Ten years ago, vampires murdered his lover. Ever since, he's looked over his shoulder, ready for vampires to strike again. Or maybe just the one he loved.

Exhausted and angry about the needless deaths he has to investigate, Brady worries the killers he's looking for aren't even human. Those fears are compounded by an unexpected visitor, the battered and nearly broken Cole Singer, the lover he'd long ago given up for dead.

When Cole offers to trade information on the killers in exchange for sanctuary, Brady realizes he doesn't have a choice. It isn't about justice. He simply can't turn his back on the face of the only man he's ever loved. Even if he's a vampire.

Not for the first time, Brady rose from bed and slipped out of the room. He inched silently down the hall, pausing at the end to find what he needed to see -- Cole still asleep on the couch. He hadn't moved. The fact that Brady had heard absolutely nothing meant exactly that and not the nightmare he'd concocted where Cole managed to get out of his bindings without making a single sound and sneaked down the hall to drink him dry.

He scrubbed a weary hand over his face. He was too exhausted to think straight. He couldn't relax enough with Cole in the apartment because he kept expecting the worst, which meant he would be irritable and next to useless when he showed up for his shift. Webster would never let him hear the end of it.

"It would be easier if you crashed in here. It'd save you trips coming in to check to see if I've wiggled my way free yet."

Brady dropped his hand to see Cole watching him, his eyes as heavy-lidded as Brady's felt. "So I'm closer for you to get to? I don't think so."

"We're both tired. And I can't sleep listening to you. You'll be doing both of us a favor."

"I'd be doing both of us a favor if I threw you out right now."

"If you really wanted to do that, you never would have let me in. Stop being an idiot, and go get your pillow."

The hardest part about looking at Cole was not seeing the vampire he'd become. Too many aspects reminded Brady of the time they'd spent together, five glorious years where nothing had seemed too big to surmount as long as Cole was at his side. They'd bested college together. Found dreams to map out their futures together. Each memory was a piece of a life he'd thought lost forever, and now here they were, bound into physical form, stretched out in front of him like nothing had ever happened.

Except it did. That life is lost. A look-alike lying on his couch couldn't change that.

When Brady didn't move, Cole sighed. "If you're not going to sleep, do you want to talk? It's been a long time."

Brady folded his arms over his chest. It hid the slight tremor in his hands. "About what? Who's seen the most dead bodies over the past ten years?"

"I know you have questions. You think you know the answers, but you don't. So ask. I won't lie to you."

"Oh, that's a good one. The vampire promises to tell the truth." Brady shook his head. "Why do you continue treating me like I'm stupid? You, of all people, should know better."

They both fell silent. Again. Brady knew he should retreat to his bedroom, spend the sleepless hours safe behind a closed door with his gun at his side, but his feet refused to move. Moving meant not seeing Cole. The fact that he'd seen him in his nightmares, every time he changed his address, every time he'd been assigned to a new murder, didn't seem to matter.

"I hate how tired you look," Cole said softly. "If you won't sleep, and you don't want to interrogate me, maybe you should go get a room at a hotel so you can get some decent sleep. There was some money in my jeans. Take it."

Brady shook his head. "I don't want your blood money. You probably stole it anyway."

"So don't take it then. The point is, get out of here. Obviously it's too disruptive being around me." He closed his eyes and turned his head toward the cushions. His hair fell away from his jaw, exposing the graceful line of his neck. Brady couldn't help but glance at it and look for scars. "I'll be gone at sunset. You won't ever see me again."

It was the perfect solution. Brady could get some sleep, and he wouldn't have to face those eyes, that pale body, the knowledge that Cole had been a part of the massacre. He didn't even care about leaving Cole in the apartment alone. It wasn't like he had anything worth stealing anyway.

"So what answers do you think I have so wrong?" The question came out on its own. It surprised both of them as it hung in the air between them, but Brady refused to back away from Cole's redirected gaze. "Clearly, there's something you want to say. So say it." 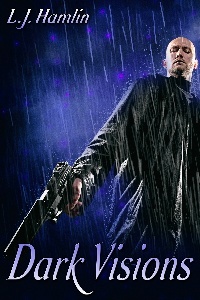