Dancing with Your Heart (MM)

Fabian Baxter has loved Caden Eliot his whole life but figured the blacksmith didn't return his feelings. Now a chance encounter with a secret admirer and the sudden courtship of Caden has Fabian confused.

Caden Eliot has loved Fabian Baxter his whole life, and now has finally decided on a course of action. To win Fabian's love, Caden will come at him from two different angles. However, his plan has the potential to backfire.

These two men must overcome their secrets in order to yield their heart's desire.

"Dancing can be a very sensual expression of one's love for another. The feel of that special someone in your arms, the syncing of your bodies when you move as one, all these things can but bring you closer together. All those things ensure that you are dancing with your heart." ~ Anika ~

Dancing with Your Heart (MM)

"Dancing with Your Heart is a sweet whimsical story. Caden and Fabian have loved each other for a long time, but both were unable to let the other know. Misunderstanding and poor judgment stood in the way of their happiness and led to near tragedy. I liked the fancifulness of Dancing with Your Heart. It was a lovable story that left me smiling." -- Ley, Joyfully Reviewed

Entering the bakery, Caden surveyed the room. The shop had about eight customers waiting to be served but he didn’t care. Actually, it was to be expected. Baxter’s made the best pastries he had ever tasted, the best on the island actually. He might be biased because of his feelings for Fabian, but the crowd would seem to support his opinion.

He walked over and joined the line, deciding that he would ogle Fabian while he too waited his turn. The other man stood at a counter, collecting payment for the orders the customers placed. A door to the left of Fabian led to the kitchen where his father most likely currently worked slaving over the oven. To the man’s right, a glass case held some of the baked goods already prepared so far. The rest of the room had only standing space.

The first customer left and Mrs. Russell went up and placed her order. His eyes alighted on Fabian and even with the flour stains on the man’s cheek he was breathtaking. Caden’s heart thumped hard in his chest, his mouth watering. He wanted a bite of that man’s cinnamon flavored skin again. Smiling, the intimacy of last night reared its head, the ache in his jaw reminding him of how much he had smiled since his late night dance with Fabian.

Standing behind Mr. Addison, his eyes never left Fabian’s face. Hair curled, framing strong facial features, the man was stunning. Fabian’s beautiful chocolate brown eyes shone with warmth as he helped Mrs. Russell. He directed a smile at her, but the curving of those sensual lips hit Caden right in his gut. Caden’s body responded to that smile, need building, gathering, settling in his lower stomach. As if the smile spoke to him, saying Sex, Now, Caden, Fabian.

Fabian ached, never having felt this kind of need before, never having wanted this badly before. His stomach tightened, need pooling low in his belly. Feeling this stranger’s fingers circling his cock exhilarated him, causing his hips to jerk forward. No other hand had ever touched him there but his own. Up until now, he wouldn’t have thought he needed the experience. He thought he could do without this feeling, thought that he would be better off without it and all the complications it brought.

Oh Goddess, how wrong he had been!

Inhaling deeply, Fabian dragged in a whiff of something spicy and male. The scent drew him in, enthralling him. That scent could become familiar. He desperately wanted it to be. The man at his back leaned in closer to his body, rubbing against his back, locking them together. They uttered no words to each other. No pleasantries exchanged between them. It wasn’t needed and it wasn’t even wanted. But delicious sounds rented the air. And for the first time Fabian added the song of his own voice to the mix.

The hand wrapped more tightly around his cock, stroking Fabian from groin to tip, milking him. His hips thrust forward involuntarily, enjoying the strokes of this man’s hand. The man captured his balls, fondling them. Grinding into his back, Fabian could feel the imprint of the other man’s cock, the outline marking a hot trail at his back. A rumbling moan escaped him, causing a shudder to travel the length of Fabian’s body.

Raw, primitive and sexual, the moment reminded Fabian what his nightly dancing was all about. This primal dance between two people so perfectly matched, striving for something more, for each other, and for the claiming of hearts. 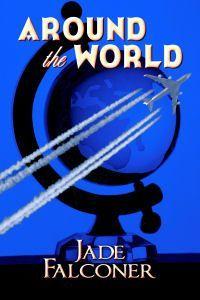 Around the World
Jade Falconer
In Shelf
$2.00 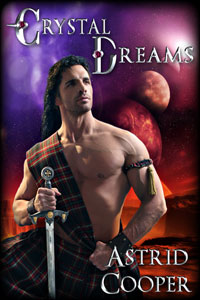