Daniel Trace dreams of days to come -- literally. Ever since he can remember, Daniel gathers hints and snippets of the upcoming day through his dreams. Of course, the dreams are never straight forward (and neither is Daniel), so the shy, rare book dealer spends his nights pulling together clues under the guise of a Medieval warrior or an ancient Greek fire fighter. Surrounded by an eclectic group of family and friends, he carves a refuge in his Chicago neighborhood.

Daniel’s latest dreams warn of the return of an old nemesis, but nothing prepares him for Karden Templeton, a man with eyes the color of chocolate as it melts on the tongue. Along with unending flirtations, Karden offers Daniel a proposal that will turn his orderly world upside down and ignite long-forgotten desires.

Will surrendering to Karden’s flirtations place Daniel at the mercy of an old love? Can Daniel learn to accept his gifts, and trust his awakening feelings for Karden? 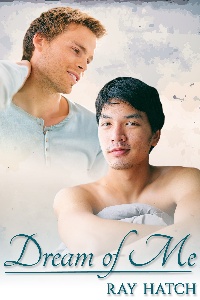 A low whistle came from Karden. “So I was close on the sexy librarian thing, eh?” he said, giving Daniel a wink.

Daniel managed a shy smile in response. “It took a while,” he said. “I took courses in chemistry to understand the make-up of pages and what impacts old books, entomology to fight off bugs that like to eat old books, geographic mapping systems to plot an old book’s path ...”

Karden raised his hands in defeat, “Okay, okay, I get it. You’re brilliant.” He laughed when Daniel’s jaw clamped shut. Karden leaned against the case and crossed his arms, contemplating Daniel. “I guess I should have read that dossier they gave me on you.”

Daniel’s eyebrows rose. “You didn’t read my file? How do you do your job?”

“Quite well, thank you,” said Karden with a small bow. He shrugged. “It all works better if I hear it from the person who is having problems. The dossier is just gossip and legal jargon.”

“You don’t sound like you work for a law firm,” said Daniel. A wariness settled over Daniel. He’d been avoiding the subject, but felt he had to ask. “Kar, you didn’t really give up your finder’s fee, did you? I mean, what were you being paid to get me there?”

Kar’s eyes continued to scan the tattered paper in the cabinet. “Twenty thousand,” he said.

Kar shot him an amused grin. “Technically, I gave up forty thousand. Professor Scumbag offered me double to get you to the airport. Remember?”

Daniel’s mouth opened in shock. “You gave up ... What were you thinking?” he asked.

“I was thinking you were worth it,” said Kar simply.

Unable to form a coherent response, Daniel stared at him for a moment more. “Wait, didn’t you say this was a smaller job on your end? Kar, what did you study?”

That charming smile kicked back onto his lips. “Event management, dining, and hospitality,” he said, biting his lip to hold back the laugh at Daniel’s stunned expression. “Hey, I was raised in a hotel casino. It was easy for me.” He crossed the room to Daniel. “You might have grown up surrounded by books, but I knew the best brunch menu by the time I was four, and the way the custodial staff made things happen by the time I was eight.”

Daniel smiled at the thought of a young Kar running around a lavish hotel. “Had the place wired, did you?” he asked. Karden nodded.

“It’s all about finding out what people need,” he said simply. “There really is no job classification for ‘fixer,’ but that is what I fell into.” Kar brushed a hand along the selection of wines. “It never really bothered me what people did for a living, they all have the same types of problems -- money, jealousy, love.” Daniel blushed and looked down at the floor, so he didn’t see Karden move closer. He leaned against the wall next to Daniel. “What is it you need, Dany?”

I need to kiss you again, thought Daniel, but left the words unspoken. He started to pull away, when a tentative hand traced along his waist.

“Jeez, Dany,” whispered Kar. “How did a librarian get so ripped?” His hand moved up toward Daniel’s chest, pushing the air audibly from his lungs. Karden slowly smiled at his reaction and touched his lips lightly to Daniel’s mouth. “What do you do all day?” his teasing tone eased the spike in Daniel’s pulse.

“Rapunzel keeps weights in the tower,” Daniel said. “And throws some yoga in now and again.” He looked at Karden. “You going to seduce me in the name of the law firm?” he asked, his own attempt at a teasing tone laced with the worry he felt.

Karden’s slowly shook his head, as his hand moved slowly across Daniel’s broad chest. “No, I’m pretty sure I’ve already been seduced by you, Dany.”

Daniel hissed as Karden leaned in and let his lips envelop his ear lobe. “When you gonna show me that tower of yours?” Kar asked as he trailed kisses down the curve of his neck. Daniel’s hands gripped Karden’s waist as the man lightly teased and sucked on a pulse point at the base of his throat. He languidly pulled Daniel into a kiss meant to taste and explore. The heavenly sensation of Karden’s tongue against his crashed into Daniel, who threw his hands against the wall on either side of Kar to keep his balance.

Even in his dreams, the kisses never felt this enticing.