Belonging to Him (MM)

I've spent my entire life in a small town with small-minded people. Willow Grove isn't exactly open to men of my persuasion -- those who prefer other men. Then I saw Victor, and was instantly drawn to him... finding out he's a vampire should send me running scared, but how can I turn my back on the only man who makes me feel alive?

**NOTE: This is a short novella and an insta-love story. This novella has an updated cover for 2020, and the content has slightly changed. 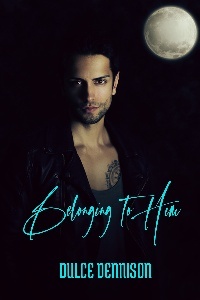 Belonging to Him (MM)

I couldn’t believe my luck. The most gorgeous man I’d ever seen had just walked into Sam’s Place, a bar not exactly known as a hangout for gay couples.  So why was tall, dark, and yummy smiling and heading my way? I was glad I’d worn my blue button-down shirt with my jeans, knowing the color matched my eyes.

As the man approached, I looked him over from head to toe, lingering on his broad, sculpted chest and flat stomach. I wasn’t exactly short at 5’10”, but this man topped me by several inches. Just thinking of having that large, hard body pressed against mine as he fucked me was enough to make me hard.

I shifted on the barstool, my cock now pressing against the front of my pants. I was uncomfortable, but in a good way.

The man’s smile widened as he stopped in front of me, obviously having noticed my frank appraisal.

“Like what you see?” he asked in a deep, rumbling voice.

“Oh yeah.” I immediately flushed, not believing I’d just said that aloud. Clearing my throat, I nodded toward the bartender. “Can I buy you a beer?”

“Sounds good. I’ll have whatever you’re having.”

“Hey, Scott, bring another Corona with a slice of lime,” I shouted to my friend.

Scott smiled and nodded. Noticing the man standing in front of me, he winked.

“I’m Victor,” the man said, holding out his hand.

I shook it and smiled. “Will.”

He slid onto the barstool next to mine. “Nice to meet you.”

“Likewise.” I took a sip of my beer. “I don’t think I’ve seen you around before. Are you visiting?”

“Actually, I just moved here.  I accepted a position at Hankins & Wilson.”

My eyes widened. “You’re a lawyer?”

He laughed. “Yeah, why?  You have a thing against lawyers?”

“No, it’s just… you seem a little young to be a lawyer. So, what do you think of Willow Grove so far?”

“Quaint.  It’s part of what drew me here.  I miss small town charm.”

“You’re from a small town?”

Scott brought Victor’s beer, opened it and set it down in front of him.  As Victor took a swallow, I watched his throat muscles work and felt my cock throb.

“I grew up in a small town outside of Dallas; no place I’m sure you’ve heard of. Population three-hundred.”

“Wow, and I thought Willow Grove was bad with nine-hundred.”

He smiled. “It just gets better and better, that’s for sure.”

I returned his smile and wondered if he was after something long term, or just a one-night stand.  I wasn’t really a one-night stand type of guy, but I might be willing to make an exception for him.  All I knew was that I wanted him. I’d never been so fiercely attracted to a man before in my life.

Victor tipped his head toward the door. “Want to get out of here?”

I hopped off the barstool. “I’d love to.”

He licked my neck, nipped my jaw and went back to kissing me, his lips ravaging mine, as if he were trying to claim me as his.

He backed me across the room and through a door. I looked around and realized we were in his bedroom.  He gently shoved me down onto the bed and began undressing.  I reached for the buttons on my shirt, but he stopped me.

I stopped at the single command and leaned back on my elbows, watching in fascination as he exposed his body one inch at a time. If I’d thought I was hard before, it was nothing compared to now. My cock throbbed and ached, begging to find release.

When he stood before me naked, my gaze raked over his perfect form, resting a moment on the large, hard cock protruding from his body. I licked my lips in anticipation and he grinned at me, obviously reading my wicked mind.

“Now it’s your turn,” he practically purred as he reached for me.

Slowly undoing one button at a time, he teased me, his fingers lightly brushing against my skin. I felt like I was on fire and wanted the exquisite torture to end. I hadn’t slept with anyone in almost a year and my cock was begging to be touched, stroked, and licked. But no matter how much I wanted him, I could tell that he was in charge and I wouldn’t get what I wanted until he said I could have it. There was a commanding air about him.

When my shirt was completely open, he pushed it off my shoulders and began unbuckling my belt. Easing it unhurriedly from my pants, he dropped it on the floor. His heated eyes held mine as he unfastened my pants, his hand pressing lightly against my cock.

I groaned and bucked my hips against him, wanting more. He smiled in pleasure when he saw that I was about to burst from my boxers and quickly ripped them from my body. He ran his fingers down the length of my cock, leaving me shivering in anticipation.

“That long?” he asked with an arched brow.

“Yeah. In case you hadn’t noticed, there aren’t a lot of gay men in this town.”

He chuckled and slid my pants down my legs. Now naked before him, I felt my body burn with desire. I reached for him and he covered my body with his, pinning my hands to the bed.

As he kissed me, I felt his cock pulse against me and I wrapped my legs around his waist. If he didn’t take me soon, I’d die.