Grab Bag 24 is a fifteen-story collection in habu’s eclectic anthology series of active gay male life and tribulations short stories. These stories, presented in the order in which they were written, were composed during the summer of 2021. Most of the stories in the collection are from contemporary time, but three of them (“Sporting and Spying,” “Kept Man,” and “The Longest Night”) dip into history. Habu is wide-ranging in his own wanderings, which is reflected in his story settings. Three-quarters of these stories are set in the United States, from New York, to West Virginia, down to North Carolina, and out West to Colorado, Las Vegas and California. Four are set internationally, from a French-speaking Caribbean island, to Switzerland, and east to India and Thailand.

All of the stories are set in a hedonist world where being actively gay and on the make is the norm and rough sex is sometimes the goal and the fulfillment. These stories are eclectic in theme. Habu came from the world of intelligence research and operations, and three stories in the collection have an espionage theme (“Sporting and Spying,” “Insurgency Control,” and “Bait and Switch”). Habu’s collections often include stories of the Sam Winterberry series, depicting operations of a CIA Candy Store unit, combining prostitution and spying, and the latter two referenced stories are Sam Winterberry stories. Habu wrote two gay vampire stories for a 2021 Halloween contest and these are included in this collection (“The Longest Night” and “Bloody Shore Leave.”) Three of the stories (“On the Roof,” “And Spoil the Child,” and “Witness for the Prosecution”) are expansions and republished stories from habu’s early gay male writings upon the change of publishers. A few of the stories in the collection venture into the world of cross-dressing (“Kept Man” and “The Scoop”) and fully transformed T-girls (“Breaking Up Is Hard to Do” and “I Understand”), where habu’s stories rarely have gone. Habu writes with variety and about gay sexual hedonism, and we hope readers enjoy these stories with this in mind. 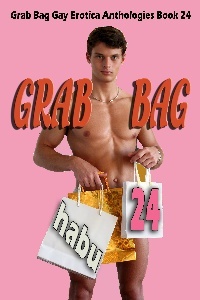 Grab Bag 14: A Gay Erotica Anthology
habu
In Shelf
$7.99
All Books In Cart
All Books In Bookshelf
Tweets by
sirenbookstrand