Dirty cop, Travis Malloy, has kept psychic, Bliss Dougan, under his thumb for a year. But as his jealousy rages out of control, she finally finds the break she’s been waiting for. Escaping into the night after an epic fight that’s left her scared and bruised, she does the only thing she can—she hides. When the ghost of a recently deceased woman appears, imploring her for help, Bliss knows that Malloy’s dirty dealings are much worse than she’d feared, and she’ll stop at nothing to take him down.

Officer Justice Wild has always believed in the oath he took when he donned the badge, and he’s always been a sucker for a woman in need. Bliss tugs at his heart strings, even if he does think she’s completely crazy. When her insane ramblings about ghosts and Officer Malloy start making sense, he wonders if he’s lost his mind, or if he’s ready to believe in the supernatural. Justice might have been prepared to do anything to put Malloy behind bars, but he hadn’t counted on falling for the sassy psychic who won’t leave his side.

Pain exploded across her cheek and through her eye as her head snapped to the side. Bliss staggered back a step, bracing her hand on the wall. With narrowed eyes, she faced her soon to be ex-boyfriend. She’d taken a lot of crap from him over the past year, but hitting was one thing she wouldn’t tolerate.

“I told you there isn’t anyone else,” she said in a near hiss. “I took myself out for lunch and a shopping trip. I needed to get out of the house.”

“You haven’t fucked me in months. If you aren’t giving it to me, you must be giving it away somewhere else.” Travis’s face contorted with rage, his skin turning an ugly shade of red. She watched a vein tick in his forehead and wondered what it would take to make it explode.

“That’s the problem, Travis. Maybe I want more than a fuck. I want it to mean something, and whatever emotions were once between us are long gone. Ever since you moved to the midnight shift, things have turned to shit between us. I can’t stand that you’re home all day every day. I need space!”

“You mean you need time to whore around.”

Grinding her teeth together, she balled up her fist and took a swing at him. He caught her hand easily enough and jerked her off balance, causing her to teeter a moment before stumbling into his chest. He gripped her hair and wrenched her head back, leaving her throat and shoulders exposed to him.

Bliss fought like a wild cat, refusing to give up or give in. Her nails raked down the side of his face, and he let out a roar before shoving her to the floor. She scrambled backward toward the safety of the next room, but he wrapped his hand around her ankle and pulled her back. Bliss kicked out at him, hitting him in the thigh. She saw the madness lurking in his eyes and knew she had to get away before it was too late. She’d waited too long to escape, and now she’d pay the price. All the signs had been there, but she’d ignored them.

She twisted and pulled herself onto her hands and knees, but he jerked her flat again, her chest against the floor, his heavy body coming down over hers. Bliss felt trapped as the oxygen was pressed from her body, leaving her gasping and praying for a way out. He placed his lips by her ear and a shiver raked her spine at his softly uttered words.

“I treated you like a princess, gave you everything. You want to fuck around like a whore? Is that what you want?” His hand worked its way between her breast and the hard floor, giving the soft mound a painful squeeze. “Want to spread those thighs for another man, sweetheart? I bet my buddies would pay good money to fuck you.”

She screamed in outrage, slamming her head back into his face. She heard a satisfying crunch and hoped like hell she’d broken his nose. For a moment, she thought she might escape, but long fingers wrapped around her neck, digging into her sensitive flesh. Her eyes widened, and she gasped as he cut off her air supply. Not one to go down without a fight, she bucked and struggled, finally managing to turn herself over.

Her hands batted at his face as she fought for breath, the world turning hazy. Reaching blindly for him, she dug her thumbs into his eyes. Travis screamed out and scrambled off her. As she sucked in much-needed air, she staggered to her feet and fled. She heard his booted steps hot on her heels and ducked into the first room with a door—the spare bedroom—and slammed it shut, twisting the lock.

Travis beat on the door. “Come out of there you fucking bitch!”

“No way in hell,” she croaked.

He beat on the door another few minutes before wandering off. Muscles strained and tensed, she listened for any signs that he remained in the house. A glance at the bedside clock told her that he would have to leave for work soon, or call in sick. She hoped like hell he went to work. It would be her only chance to escape.

When midnight rolled around, she heard the front door slam shut and breathed a sigh of relief. The bastard was gone. She waited another half hour, just to make sure he didn’t double back. He’d been known to leave and return unannounced. When Bliss thought it was safe, she unlocked the door and crept out into the hall.

Her heart still pounded in her chest as she checked the house room by room. The first thing she noticed was her missing keys. Asshole had probably taken them, thinking it would keep her home. Keys or no keys, her ass wouldn’t be here when he returned.

Bliss whirled, her heart leaping into her throat at the unknown voice. “Now?”

The apparition nodded. “He has plans for you. The same plans he had for me.”

The woman smiled. “Cherise Carlton. I had a nice life once, like you. Until he and his friends snatched me off the street, drugged me, and sold me.”

“I’ll tell you about it while you walk. You have to get out of here now, or it will be too late. If he gets his hands on you, you’ll wish you were dead.” Cherise smiled sadly. “Trust me; this is an improvement.”

“Where?” Bliss rushed onto the front porch, looking down the street both ways. “I don’t have a car. Where am I supposed to go?”

“Anywhere he can’t find you.”

Bliss took off at a dead run down the sidewalk, heading toward downtown Boca. She didn’t stop to look over her shoulder. If the ghost said Travis was coming, she believed her. In twenty-six years, a ghost had never lied to her.

Bliss darted down an alley, taking the twists and turns behind the many businesses on the main strip. She heard the squeal of brakes as a car slowed on the main road. With palms slick with sweat and her heart pounding, she ducked into an abandoned building, getting lost amongst the forgotten crates. 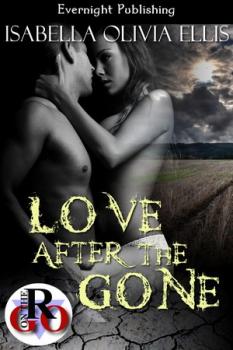 Love After the Gone
Isabella Olivia Ellis
In Shelf
$2.99