When Ana Seger meets Ben Scalia on a message board dedicated to her favorite band, she's immediately charmed. Even when she learns Ben is a few years younger than her, she continues talking to him through email, chat rooms, and on the phone.

Driven by their attraction, Ana agrees to meet Ben at a concert, but she's unprepared for the reality of their age difference, and more, the strength of her desire for him. She tries to end their affair before it can begin, but Ben is more than ready to fight for her and a chance to show her how good they could really be ... 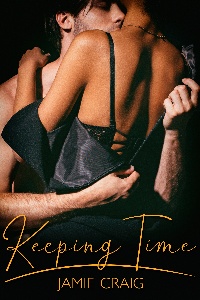 "I'm really looking forward to next week, Ana. These past three weeks have been ... unexpected."

"I know exactly what you mean," she said, matching his tone. "It feels like I'm spending every free second checking my email, or writing an email, or chatting, or just thinking about you."

"Are you going to slap me if the first thing I do is kiss you?"

"I guess it depends on the second thing you do," Ana teased, biting back her initial response of Please do.

"Probably kiss you again. I think if I distracted you too much from the concert, I'd ruin any chance I have at a second date."

"It depends on when you distract me. The Solar Kittens are the opening act, and I wouldn't mind missing their set."

"I'll remember that." Something creaked. Was it a bed? Was he still in his bedroom? Oh, God, he was lying down, she was sure of it. "I'm probably torturing myself by wearing the leather when I'm going to be a walking hard-on all night, but it'll be worth it."

"The part of me that loves leather pants appreciates your sacrifice. Because, from where I'm standing, it'll be very worth it." She sat on the edge of the bed instead of returning to the couch. If he was going to stay in his bedroom, then she would stay in hers. "So is the phone call turning into everything you'd hoped it would be?"

"More. I got a date out of it, I got to hear your sexy voice, I can't think of anything that'll make it better. Oh, wait. Yes, I can."

It might have been her imagination, but she thought his voice went even lower. "What?"

"Getting to hear you come." His breath came out in a long, slow shudder, followed by a soft groan. "What did you end up deciding to wear for this, Ana? Something that'll let you touch yourself?"

"Yes. I chose a T-shirt and shorts but ... I've already lost the T-shirt," she admitted, leaning back against her pillows. "And I started on the couch, but I'm in bed now."

"No shirt means your nipples are hard." Three weeks of e-mails and chatting had attuned him far better to her habits than she'd thought. "Someone's a little excited."

"It's your voice," she breathed. "I don't know how your students concentrate on math when you talk. I wouldn't be able to. And the fact you're naked."

He chuckled again. God, she was going to come just from the sound of that. "I don't teach naked. Believe it or not, that's frowned upon. And somehow, I think droning on about factorials isn't quite as sexy as talking about kissing you, or licking you, or what it might feel like to fuck you."

Ana would disagree. She'd listen to him drone on about factorials, or the stock exchange, or the yellow pages, if that's what made him happy. "We should test that. You can start by talking about licking me, and I'll tell you how sexy you sound."