With another month of quarantine ahead, Dillon is depressed. Stuck with no one to talk to but the squirrel who visits his terrace for snacks, he's pretty sure June is going to suck. One morning, things start looking up when a pride flag appears on the terrace railing right across from his.

Kit is up from downstate for just a month. He and Dillon hit it off and find a way to make the best of social distancing and the clothesline that runs from one building to the other. They even celebrate Pride and other occasions with their neighbors and spend some intimate moments together, despite being so far apart.

As much fun as June turns out to be, what happens when Kit's short stay is over? Are the two only enjoying a brief summer fling? Will even more distance between them mean the end of everything? 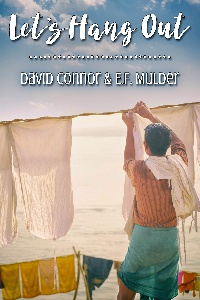 I was out on the terrace the next morning in nothing but rainbow boxer shorts. June was all about rainbows. Over the next month, my clothesline showed as many colors as my flag, T-shirts, socks, and especially boxer shorts. In July, I wore a lot of red, white, and blue, except on the twenty-fifth, when I'd put on undershorts with Santa or candy canes for Christmas in July.

It was written in red, orange, yellow, green, blue, and purple Sharpie on a plain sheet of white printer paper. Delivered via the rope and pulley between our buildings, it had been attached with two wooden clothespins. I had to smile. Then I panicked a bit. Could they see me? My hair was wild, the hair on my head and my chest, the latter dotted with crumbs from my English muffin. I did my best to pat down and clean up both, as I sucked in my gut and tried to sip my coffee like a GQ model.

"Should I send a response, Nutt Butt?"

She said I should. Either that or "More peanuts."

I knew I had crayons somewhere in the apartment. My nieces and the kids from the building they played with when visiting liked to color. None of them had been over in a while. No one had. No one could. Black magic marker wouldn't do, so I kept searching, until I found a set in a box on the closet floor.

Simple and to the point. I used the same six colors, repeating four because of the comma and exclamation point. I'd wasted five sheets of paper going from exclamation point to period, back to exclamation point, back to period, while also putting in and taking out the comma. Who knew punctuation could cause such stress? While I broke out in a sweat, Nutter Butter was having a field day batting around the crumpled reject paper balls under the table on my balcony.

"This will have to do," I said on the seventh attempt.

Hung nice and straight using two of my own clothespins -- squeak, squeak, squeak -- I sent my message on its way across. Uncertain what the protocol was regarding touching a stranger's paper during a pandemic, I'd left the original message as well. Still, once finished, I washed my hands to two full run-throughs of "Happy Birthday," holding three of the last four notes for eight beats each and the final one for sixteen to scrub between my fingers even more thoroughly before rinsing.