Christmas is around the corner and Matthew Blick is not looking forward to spending another holiday alone. His five-year-old niece, Hannah, loves her uncle so much, she asks the department store Santa to bring her uncle someone to love.

When Santa shows up at Matthew’s house, he doesn’t recognize him. As memories of his first kiss rush back, he’s shocked to find the man he hasn’t been able to get out of his mind since high school. Can a kiss change the way Matthew feels about Christmas? 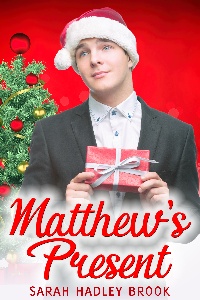 He put on some music, pulled the cookie dough from the refrigerator, and got to work. Soon the whole house smelled like fresh-baked cookies, and he was on his second glass of milk and his fifth cookie -- okay, his sixth cookie -- when the doorbell rang.

Too early for Kevin, he thought. Probably his sister checking on him. God, would his family just leave him alone?

He shoved the entire cookie in his mouth and yanked the door open, ready to give his sister hell. He was nearly thirty years old, for God's sake! Nobody needed to keep watch over him. Instead he found himself staring at a guy wearing a fluffy white beard, a red Santa hat, and a large red bow placed in the center of his chest, on top of his gray winter coat. What the hell?

Matthew started to speak, but his mouth was full of cookie. Chewing quickly, he stepped onto the porch and looked around. No cameras. Nobody hiding in the bushes, watching. This wasn't some sort of prank? What the hell was going on?

He turned back to the guy on his stoop, and his breath caught in his throat. Those blue eyes. They had to be the same ones he had fallen into earlier today. God, maybe he did have some sort of fever ... Surely department-store Santas didn't make house calls, right? But something about him stirred another memory trapped deep inside.

He leaned down toward the shorter man a little. "Who the hell are you?" Damn, his voice came out a little rougher than he meant it to.

The guy flinched a little but stood his ground. "I'm your present ... from Santa."

Okay, now he knew someone was messing around with him. Santa was sending him a man?

"Want to repeat that?"

The guy sighed. "Santa sent me in response to a Christmas wish." He glanced around, clearly more than a little nervous now.

"A Christmas wish ... from who?" His eyes narrowed. "Did my sister put you up to this?"

The wind picked up and some of the snow swirled into the air.

"Look, it's freezing out here. Come inside," Matthew insisted, "and we'll get to the bottom of things."

The man in the bow nodded but still looked a little unsure.

"I won't bite. I promise. I can't let you stay out here and freeze." Matthew gestured for him to go in ahead of him and when he did, he caught a whiff of peppermint and had to smile. Whoever he was, the guy really went all out for this.