Thomas Durling escaped his small-town upbringing for over ten years, until a single phone call drew him back. Told his mother has been diagnosed with early onset Alzheimer’s, he returns to the small northern Michigan town he once called home to find a mute stranger taking care of her in his stead.

On the surface, Andre seems harmless enough, but Thomas has enough problems trying to deal with his mother’s illness. He doesn’t need a gorgeous young man to distract him, especially in a town that drove him away once already with its homophobia.

But Andre has nowhere else to go. A wolf without a pack, he’s been on the run since witnessing his father’s murder, always looking over his shoulder, never looking ahead. Taking care of Thomas’s mother has given him a welcome sanctuary, as well as a place he can call home for a couple months. He wants to stay, but more importantly, he wants to help, even if Thomas isn’t ready to accept that they could actually be friends ...

At Pastor's call, the young man glanced back, and all the air disappeared from Thomas's lungs. Stranger or not, Andre was stunning. A long, angular jaw, just like the rest of him. Bee-stung lips women would kill for. And eyes such a pale blue, they felt electric, all the way across the yard.

"This is Thomas, Amy's son," Pastor said as they approached. Andre straightened, and while he easily matched Thomas's height, he held himself like a skittish animal, ready to bolt at a moment's notice. "Thomas, this is Andre Nezat."

Thomas held out his hand. "It's nice to meet you."

A moment of hesitation. Andre's gaze dropped to Thomas's offering. Long, almost girly, eyelashes became more visible as they fanned across his cheeks.

But the shifted attention did the same to Thomas's, driving it downward to catch on the young man's exposed throat. Instead of a smooth column to match the rest of him, Andre's neck was a map of scars, bone-white against his tanned skin, puckered with age. Thomas jerked his eyes away as soon as Andre lifted his again, but curiosity burned inside as they finally shook hands.

"No." He couldn't look away. Andre couldn't be deaf. He'd turned around at the sound of Pastor's voice. "You can't speak?"

With a shake of his head, Andre reached into his front pocket and pulled out a small notepad, its pages bent and crinkled from having been shoved into his jeans repeatedly. A stubby pencil appeared as if from nowhere, and he scribbled out a message to hold out in front of him.

Thomas frowned. That wasn't what he'd asked, and he was a little ashamed that his distrust of a stranger in his impaired mother's home shone so clearly. "Where would you go?"

"Your mother's the one who invited him to stay." Pastor came up to stand between them, and again, Thomas wondered how belligerent he must be coming across if Pastor felt the need to referee or protect the young man. "I think having him around is a good idea."

"She certainly likes him. You," he added directly to Andre.

More scribbling. Mrs. Durling has been nice to me. I like to help her.

Suggesting others hadn't necessarily been as nice. Those responsible for his scars, maybe?

"But you're not from around here."

A shake of his head.

"Andre's the one who told me what happened at the doctor," Pastor explained. "He drove her to her last appointment."

Someone needs to take care of her.

The direct statement jerked Thomas's gaze back up to Andre's expectant eyes, though after holding them for several seconds, Andre ducked his lashes. His fingers curled protectively around his notepad, and his arm fell to his side, ready to retreat at the slightest provocation. Skittish. That really was the best word to describe him. He claimed to have no family, so maybe he was the product of the foster care system. Abuse would certainly explain the scarring and attitude.

He could kick Andre out without remorse. The guy was a stranger, and Thomas was the actual son in this equation. But he'd befriended Mom when she likely needed him most, and from the looks of it, he could use the sense of accomplishment helping out provided. Plus, both of them were right. Thomas couldn't do this alone. He'd almost lost it just driving into town. It killed him to realize he was on the verge of losing his mother to Alzheimer's. She was too young for such a debilitating disease.

"I don't want to disrupt her routine more than I already am," Thomas said. "You can stay."

"Good call." Pastor clapped each of them on the shoulder, his arms a bridge though Andre flinched at the firm contact. "You won't regret it, Thomas. Andre's a fine young man."

Color crept into Andre's cheeks at the compliment. If Thomas had met him under different circumstances, he would've been charmed enough to consider buying Andre a drink or asking for a dance.

These were not the right circumstances, though, and any attention he paid to Andre had to be on a strictly fraternal basis, regardless of how attractive he was. Mom saw him as a surrogate son, so Thomas would treat him like the kid brother he never had. Help him out. Protect him.

Those wide pale eyes locked on his for a long moment. Almost like he could read Thomas's thoughts.

Thomas suppressed the shiver that wanted to erupt. 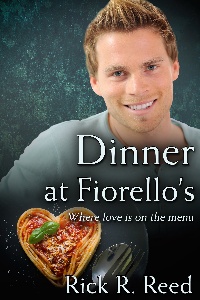