For as long as Boyd can remember, he's been pushing pins into a map. Carson City, Las Vegas, Albuquerque -- all places he wants to see, for a dozen different reasons that wouldn't mean a thing to anyone else. When he finally gets a chance to purchase the '70 Plymouth Duster of his dreams, at a price that even he can manage, Boyd jumps at the opportunity.

Oliver seems like just another kid with a broken dream when their paths cross in Vegas. Against Boyd's better judgment, he offers to let Oliver hitch along for the ride when Oliver confides the need to get out and get gone.

But isn’t long before Boyd realizes Oliver's reasons for running are more complicated -- and more dangerous -- than Oliver let on. Boyd doesn't like people who play hardball, and he definitely doesn't like people messing with a man who's managed to light a fuse that Boyd forgot he had.

Boyd could have sworn the kid was going to be turned away when the young man had his ID checked at the door. It was the kid's body language that bespoke of youth: the fists gripped nervously at his sides, the flicking eyes, and the tension in his spine. He was one of those types that even with the disheveled clothing and the blond strings of hair falling out of his ponytail, he still managed to somehow look unbelievably sexy, and if that didn't scream "too young," nothing did. The boy wasn't tall, but he wasn't short either, topping out at around five-eight in Boyd's estimation, and he was the kind of slim that Boyd's mother would have called "all points and edges." Whether that could be associated with the worn state of his clothing or had more to do with needles or illness, Boyd would not make judgment on. Yet the strong posture and seemingly healthy teeth that worked the kid's lower lip didn't give Boyd the indication of a tweaker. If Boyd was going to take a guess on it, Boyd would say that it wasn't addiction fueling the nervousness in the young man's eyes. Desperation, yes; but not for a fix.

Boyd told himself to walk away. As the young man was handed back his ID and walked through the doors, as he slowly relaxed his fists and began the process of smoothing out a crumpled bill, Boyd told himself not to watch. When the kid took a deep breath and walked to the center of the entranceway, to the 'one-shot at a thousand' machine, Boyd's mind flailed at Boyd's body for leaning back against the wall and crossing his arms over his chest, still watching intently. While the beaten five was fed into the machine and the young man hugged his own body, Boyd waited. It took a full minute for the kid to get up the nerve to punch the button and activate the play. Boyd saw what could only be a prayer get whispered to whichever god the young man felt was listening, and within seconds Boyd saw that prayer get denied.

To measure the kid's response as disappointment would have been an understatement. Weight appeared to drop on the kid's shoulders at unmanageable levels. His pretty face went void of every emotion except resignation. It was the kind of look, Boyd thought, that animals got when they knew they were being led into the slaughterhouse.

Boyd wasn't consciously aware he'd pushed off the wall and had started walking towards the kid until he bumped into a group of young women giggling their way through the lobby. The giggles became flirtatious as Boyd apologized and side-stepped, and even though the exchange took place only steps away from the young man, the kid's expression didn't change. Nor did the kid turn eyes their way to see what was going on or acknowledge that someone was advancing.

Boyd couldn't have said why he was bothering. But one of the few things Boyd knew for certain was that if someone was bleeding and you had a bandage, it didn't hurt to hand it over. Karma was best left satisfied when possible. He realized too late that he hadn't taken the time to think about what he'd say when he got there, though. So, Boyd just tried the first thing that came to mind. "That looked like it hurt."

The kid didn't turn right away. He stared at the symbols in front of him long and hard. He sucked back a sniffle, and then a breath. When he did finally look over, the dark circles under his eyes were even more obvious. So were the bruises along the left side of his neck -- four perfect finger marks -- that Boyd had not seen previously.

"I'm fine." The kid smiled without emotion. "Thanks."

Boyd didn't mean to speak again. He should have just taken the kid's brush-off for what it was, nodded, and walked away. In any normal situation, he would have; one shot, one try, then accept defeat gracefully. But Boyd's reply came without thought. "I doubt that."

The kid's smile drooped into a frown and he shrugged. "Yeah, well, whatever. Unless you got a thousand bucks you want to throw away or a jet hidden somewhere, your doubt isn't going to change a fucking thing."

"Nope." Boyd shook his head. "I definitely don't have either of those." He softened his face into a smile that he hoped didn't look too creepy. "Not that I would've minded helping you out if I could have. Sorry about that."

The kid clucked his tongue and leveled his gaze on Boyd's. "No, I'm sorry. Because you obviously got the wrong guy, pal. I'm not a whore. Go try the strip." 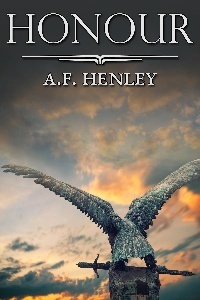 On the Ragged Edge of the World (MM)
Jamie Craig
In Shelf
$4.99
Tweets by
sirenbookstrand