Word spreads through a gentlemen's club in 1870s New York. An "interesting and perhaps educational" display for gentlemen will be held the next night at The Stern Emporium on 23rd Street. Not knowing what to expect, I go with my good friend Edgar.

And there, at The Stern Emporium, we fall into the sight of two tall, beautiful foreign men -- an Swede and an Italian -- making hard, intimate love for our entertainment. And education. 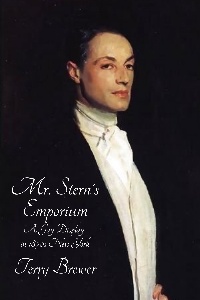 With a bow, Paolo turned to the final wall as Stefan did the same.

“Have you ever seen anything like this?” he whispered.

Something caught in my throat, but I managed to say I never had.

He looked to my crotch. He smirked when he saw my attempt to hide my condition. “Are you as excited about them as I am?”

I could see a bulge in his tight trousers. He was bold and left himself exposed, and I nodded to his question.

Our attentions returned to the stage when we realized that Stern had returned and the two men joined him in the center of the stage, and a spontaneous burst of applause rang through the emporium, some men even whistling.

“Gentlemen. Gentlemen,” Stern said until the hall was silent again.

“Stefan and Paulo will now answer your questions.”

When someone across the way stood and began, Stern put a hand up.

“You misunderstand. They will answer your questions, your many questions, wordlessly.”

He stepped from the stage, and his two “guests” stepped to one another. They were parallel to where we sat. I could see that Stefan’s penis was far from flaccid now and it seemed to grow as he approached the Italian, whose own penis was already hard and erect.

Though it was inevitable, the room, to a man (and perhaps three or four disguised women) expecting some sort of wrestling contest in the Greek mode, was shocked, and a gasp rose from it when the two men reached one another and kissed. A hard, hard kiss of the sort I never before witnessed (at least in the flesh as opposed to in a photograph) between two people let alone two men. I had, of course, seen the play kissing pairs of prostitutes engaged in as a sort of stimulating prelude at one of the brothels on Seventeenth Street before adjourning to a bed with the whore of my choice (as often as not one of those engaged in that sapphic display) for my main event.

This, though, was not play kissing. It was two men, their penises now rock hard and battering against each other, diving into each other’s mouths, alternating whose tongue danced in whose mouth.

The initial gasp settled into complete silence except for several members of the audience (we “voyeurs”) who loudly rose and rushed to the draped entry, their departures ignored by the rest of us. All that could be heard once those bores were gone was the moaning from these two gods. My own penis was rock hard and almost uncomfortable, but I resisted doing anything about it. To the side, I saw that Edgar was running his hand along his trousers over his bulge and moving anxiously on his seat. I stole a glance to my other side, and the three men along the aisle were doing the same.

There would be no disapproval in this audience and freed from restraint, I felt a jolt when my hand came into contact with my own bulge over my pants, my eyes fixed on the men before me. It would not be long, I knew, before I would have myself out, but I’d wait until the others did first.

Suddenly the two men on the stage separated but they remained close to one another. Paolo began kissing down Stefan’s chest, lowering himself as his tongue drew a path between the Swede’s breasts. Stefan’s hands were atop his lover’s head. They did not seem to push. They merely were there to be part of what the Italian was doing, caressing that oily, curly hair. The worshiper lugubriously drifted his tongue down, now and then replaced by his lips for a gentle kiss.