Bobby Kendrick has idolized reclusive author Dr. Parley Taylor since he was a teenager. The only problem is, Dr. Taylor has disappeared.

Bobby finally finds Dr. Taylor in a tiny basement apartment in Kansas City, and the first thing he learns about his idol is that Parley Taylor doesn’t want to talk to anybody. Especially his fans.

But Bobby wants to show Taylor that the world is waiting for him, and he is not going to give up on his Nowhere Man. 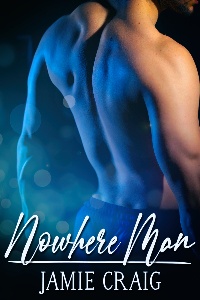 “Why do you keep ascribing your feelings of inadequacy to me? First you accuse me of being a coward, and now you think I’m feeling sorry for myself? Just because I don’t live my life the way you think I should? Or do you expect me to apologize for disappointing you?”

“And if I needed any proof at all that you’re exactly like I said, that would be it.” It dawned on Bobby that he was still holding Taylor’s wrists, and he looked down at them in mild surprise. Taylor saw the path of his attention, but when he tried to take advantage of the distraction to yank away, Bobby just yanked him forward.

Their bodies collided, and though it was just a brief crush of hard flesh to hard flesh, Bobby felt the heat seeping through Taylor’s thin clothing. It was enough to make his breath catch -- only for a fleeting second, but a second nonetheless. A knowing glint appeared in Taylor’s dark blue eyes, and Bobby hastily released him, taking a step back.

Taylor didn’t let Bobby have the space he wanted and needed. His step back resulted in two steps forward from Taylor, and his eyes glittered. “I’m beginning to think you had an ulterior reason for knocking on my door, Bobby Kendrick.”

He shook his head. “No. It’s not like that.” But there was nowhere else to retreat, and Taylor wasn’t stopping, matching each stride until the couch hit the back of Bobby’s legs. “I admire your work. What you had to say. That’s all.”

“You’re not a very good liar. You sound convincing enough, but your eyes give you away. And your eyes have been crawling all over me since you walked in.”

Taylor chuckled. “Even if that were true, it wouldn’t be enough to dissuade you. I think that’s what you like the most. You’re wondering how you can get close enough to fix me.”

Bobby tightened his mouth. It was the only part of his body he seemed to have any control over. Taylor stood right in front of him, and though he’d already proved he was more than strong enough to take the older man, the instincts to do so failed him.

“That’s not true.” But not even he was convinced by his weak assertion.

Oh, Bobby knew, all right. They had been a big part of his fantasies at the start. The tales of a young Parley Taylor, partying all night, fucking all day, writing on scraps of toilet paper and club napkins whenever the spirit took him. He’d even seen people trying to hawk some of the written snippets on eBay.

And yes, maybe once upon a time, he’d imagined what it would be like to be the one Taylor chose. To be the one to get fixed by those piercing blue eyes, watch the Man Himself prowl through the crowd like he owned the joint so that you were hard and ready for him by the time he reached you.

But not now. Not in years. This wasn’t what he wanted at all.

It was too bad his body had different ideas.

“Oh, you can help.” He brushed against Bobby, and his arousal was obvious. “If you’re willing to go that extra mile. You know, you’re just the sort of kid I would have sought out. Of course, the hunt makes it more exciting, but I’m not going to complain too much that you just showed up on my doorstep.”

“I’m not a kid,” he blurted, and immediately felt ridiculous. Taylor was playing him again. He knew that. So why the hell wasn’t he stopping him?

“So what are you going to do? Stay here and prove it?” Taylor reached between them, his fingers tracing the line of his erection. He hardly applied pressure, but the contact still seemed to sear him. “Or get out while you can?”

He reacted, because it was the only thing he could do. His hand shot out, gripped Taylor’s shoulder, and shoved him sideways, sending him sprawling along the length of the couch and pinned Taylor to the cushions.

The new position ground their cocks together. Bobby groaned as he began to rock.

“You’re an asshole,” he muttered.

Taylor grinned, his hand going to Bobby’s hip. Instead of stopping him, the tight grip just encouraged Bobby to build the pressure between them. “That’s what I’ve been trying to tell you since you walked through the door. You’re just getting the message now?”

Seaworthy (MM)
K.L. Noone
In Shelf
$5.99
Tweets by
sirenbookstrand