Young widow and artist Keely must reinvent her life after her husband’s sudden death. Her first step is to move to a new town.

When her landlady hires a couple of itinerant painter-handymen to refurbish the house, Keely begins to awaken from her grief-spawned isolation. Inspired by the two good-looking workers, she explores a new focus for her art and discovers the exotic pleasures of a ménage for the first time. 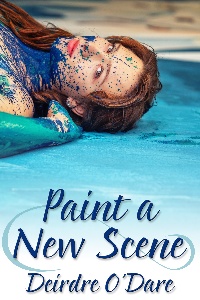 “Where are the etchings?” Keely posed the question with a giggle, determined to play along with the game Jerry had begun.

Jerry twirled an imaginary moustache and leered. “We have you in our power now, me lovely. What should we do with you?”

Keely fluttered her lashes and glanced coyly back and forth between the two men. When she spoke it was in a quivery falsetto. “Oh my, I’m afraid you’re going to have your wicked way with me. Oh dear, what have I got myself into?”

She had not had that much beer but the whole evening had been intoxicating until she was giddy and silly with it, hot nearly to the point of melting and far past any wish to back out or change what seemed the likely outcome. “But I’m prepared to hand over my virtue. ...” She began to laugh then and could not go on. “Oh hells bells, one of you better come over here and kiss me!”

Jerry moved first. He closed the distance between them with one fast step and caught her by the shoulders. The next moment he angled his head just enough not to bump noses as he sought and found her lips. He tasted of beer and the nachos they’d munched, smelled still of the piney aftershave, and kissed like a consummate professional. Not too much tongue or too little, not too much wetness or pressure or one single thing that did not feel absolutely right. She grabbed at his arms to steady herself as the world began a slow spiral beneath her feet. A small moan escaped her lips, muffled by his. Yes, oh yes!

A moment later she felt another hard, hot male body close behind her and a second set of hands clasped her waist from behind and then began to explore, one slipping under her top to approach her breasts and the other fanning across her stomach, the heat of it burning through her jeans.

Tim’s warm breath feathered across the back of her neck and then she felt the moist tickle of his lips on the sensitive skin along her hairline, behind her left ear, and at the side of her neck where her pulse skittered in a frantic dance.

Sandwiched between their muscled bodies she could not move, could barely breathe but that didn’t matter. It all felt so fabulous, so exciting, so absolutely necessary and perfect. She wrapped her left arm around Jerry’s waist and reached back with her right, finding one cheek of Tim’s ass, which was maybe not quite as enticing as Jerry’s but close.

She dug her fingers into the flexing muscle and held on tight as he pressed even closer until she could feel his erection nudging against her tailbone, hot and hard through both their trousers. Jerry slid a leg in between hers and pressed upward with his thigh, right against her aching clit. She could not keep herself from wriggling enough to rub against him.

Oh my God, in another minute I’m going to explode like a box of dynamite from the mines! I can’t believe I’m doing this or enjoying it so much. Be careful what you wish for, Keely girl. This time you’re going to get it in spades.