Daniel Jankovic never dreamed his life with his boyfriend Tate could be so perfect. But seven years in, they live together, still love one another, and still celebrate Christmas with Tate's accepting family. While Dan doesn't miss his abusive and alcoholic family of origin, he doesn't think he misses the traditions that he once celebrated in a Czech immigrant household -- until he meets Matthew Varga.

Matthew never stood out to Dan until he overhears him say Merry Christmas in Czech. Suddenly, all the memories Dan once suppressed of his former Christmas celebrations come back, along with a hefty crush on Matthew. They're both academics, in the same English Literature program, and both have difficult and distant families. They relate to one another on a level Dan could have never predicted.

When Tate and Matthew meet at a Christmas party, the two also hit it off. Matthew, like Tate, grew up building things on a farm and likes to work with his hands. The always open and accepting Tate sees nothing wrong with letting Matthew stay the night on their couch, and then, eventually stay in their bed.

But as Christmas nears, and their three-way relationship intensifies, Dan is left wondering where Matthew will fit in for Christmas -- and long afterwards. 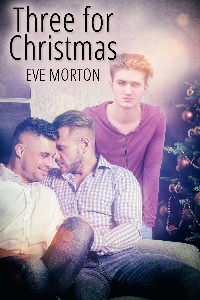 Yet I was utterly heartbroken that I didn't see Matthew. It wasn't even that I had wanted to trick with someone else. Or even that I was bored of our own sex life. I was not. Tate was strong and dominant, while also kind and loving. We still had as much sex as we had in our first year together -- though not as much as that first six months. So why did I want, and miss Matthew, so badly right now?

All I could come up with that wasn't a kinky threeway fantasy for a seven years itch was the language. Czech, pure and simple. Not that the kinky threeway was bad, or unwelcomed. But it was the language that made me realize that it wasn't just any dick I wanted to share with Tate, but this particular dick. And it wasn't about the dick. It was about the words, words that I had forgotten, and the Christmas traditions that came with it.

I finished my beer and paid for it. The bartender thanked me for the generous tip with a casual, "Happy holidays."

"Veselé Vánoce," I told him.

He didn't hear me, or at least, didn't ask what I meant.

I left to use the bathroom, checked for Matthew in there, but seeing nothing and no one familiar, came back out. At least we'd done something different, I figured. Even if Matthew hadn't arrived, Tate and I had changed things up. I was even gearing up to tell him about all that I'd remembered in the short time since speaking Czech again -- when I saw him.

He wore a ridiculous sweater, not exactly a bad Christmas one like so many of the other grad students here had on, but a thick one that seemed as if it had been a gift given to him years ago that he'd grown into, except he never grew into it. He was smiling amiably and chatting with someone I couldn’t see due to a waiter standing in my way. When I came around the corner, I heard Tate's laugh before I realized it was the two of them talking.

They had found one another during this rather dead and lifeless Christmas party. And the two of them were now bringing it back to life, telling some kind of story that soon had both the other female grad students close by in stitches.

I stepped closer, a half-smile on my face. I should have known this would happen. Of course Matthew and Tate would get along. I had no idea how or why -- what common interest could bond them in that moment? -- but the elegance of their bodies was familiar to me. The elegance of their mannerisms, the casual way in which they talked to people, that was familiar. That was obvious. I stood marveling at the two of them for a long time before I finally walked over.

Tate noticed me first. He gave me a wide smile, one that was riddled with mischief. He seemed to say, Why did you not tell me about Matthew? As if he hadn't known that I had only really met Matthew this afternoon, in spite of knowing him for two years.

"There you are!" Matthew said. He jumped up from the table and wrapped me in a hug. It was warm, mostly thanks to his sweater. His breath was hot with alcohol. He was a little tipsy, and perhaps that was what made him so bold as he traced his hand down my arm and then linked our fingers. "You should have told me that your partner loves James Patterson."

"I don't love him," Tate said, rolling his eyes. "I said that I respect a man who can churn out book after book and dominate the well-known and very necessary industry of airport reads."

"Dana and Mara are just horrified," Matthew said. "I think he's offended their sensibilities as literature students. So I've been talking about my own favorite bad authors. But not bad at all, you know? Like Nora Roberts and J.D. Robb."

Both women made faces as both Matthew and Tate continued to list off popular, but not necessarily bad authors. It was clear the whole thing was designed to gently mock the literary students' ability to take themselves too seriously. Tate had been playing along, because Tate always played along, but it was also obvious to me that the two of them had talked about something more, something better than mere mockery, before I'd arrived. Once the women left, ostensibly to get more alcohol, I felt the tenor of the conversation change.

"I was impressing your partner with my tongue," Matthew said. He squeezed my knee under the table, and then pressed his hand higher towards my thigh.

I nearly choked. "What?"

"You know, my second tongue. Czech," he said, then laughed as if it was the best joke. "Tate didn't know what I was saying. I guess that's just a you thing?"