Big and Red are conmen and lovers a bit down on their luck when they learn of an easy mark, a rich old woman who lives alone in the woods. Hoping to ingratiate themselves by pretending Red is her long lost granddaughter (complete with red dress and basket of baked goods), they set out over the river and through the woods, even if Red is a bit hesitant about the cross-dressing.

When they aren't the only ones trying to cash in, their plans have to change. Jack, a trickster himself, is already on the scene, and is very good at making both Big and Red rather hot and bothered. And when it turns out the little old woman is running a con of her own, all bets are off, and the fur -- and clothing -- will fly as everyone scrambles to survive. 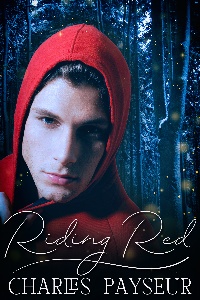 "Ah," Esmeralda said, and shrugged. "That would explain it then. And these cookies are for me?" She reached into the basket and pulled out a chocolate chip cookie. Red nodded.

"Anyway," Jack said, "I'm sure that the shock of learning that you have an entire family to acquaint yourself with is a bit overwhelming. If you tell us where me and Sonya here can rest our feet after our long journey to find you, we'll give you some time to adjust."

Esmeralda continued looking at the cookie before nodding and motioning toward a hallway leading away from the large sitting room.

"Down there, first two doors on the left," she said, not taking her eyes off the baked good, and Red and Jack shared a confused expression before shrugging and making their escape.

They both stepped into the first room and immediately Jack shut the door with an angry grunt.

"What the hell do you think you're doing?" he demanded, and Red sighed, crossed the room and sat heavily on the bed.

"What am I doing?" Red asked. "I think it should be obvious, as you seem to be doing the same thing."

Jack opened his mouth, closed it, ran a hand through his hair, then plastered on a winning smile.

"I'm sorry, I think we got off on the wrong foot," he said and slid closer, licking his lips slowly as his eyes ran up and down Red's body. "I'm Jack."

Red wanted to laugh, part because Jack obviously had no clue who he was dealing with and because Big's plan had completely backfired. Instead of making him less threatening to an old woman, the dress seemed to have succeeded only in making him more attractive to this conman. Not that Jack was bad looking. His smile was roguish, and his body looked tightly muscled, probably from a life of running away from bad situations. He wasn't as tall as Big, or as wide, but he did look like he knew how to have a good time, as long as Red kept an eye on his valuables the entire time.

"You used your real name?" Red asked, not quite willing to give his own. Rule one in deception was never giving your real name, but Jack only laughed at the question.

"Of course," he said. "I'm kind of a big deal, after all." He struck a pose as if that action alone would cause Red to recognize him. A dejected look crossed Jack's face. "Come on, you've never heard of Jack and the Beanstalk? Jack the Giant Slayer? Jack of Hearts? Jack-of-all-trades?"

Red squinted. Of course he had heard all those names before. But to think that the man behind him was the Jack was ridiculous. No man could be all those Jacks.

"Really?" was all Red asked, though, and Jack gave a devilish grin.

"Also Jack the sex machine, if you listen to the right stories." Jack kept approaching, and Red stood so he couldn't be trapped on the bed. He retreated toward the room's fireplace.

"You know you're cute when you're dubious?" Jack said, still gliding closer.

Red huffed and grabbed the hem of his dress, saw Jack's eyes light up as he pulled it up, revealing his thighs and further still, until the fabric revealed his undergarment and, more importantly, his obvious bulge within it.

"You can drop the act, okay?" Red said, enjoying the look of surprise on Jack's face, the shock. The ... desire? Red gaped as Jack licked his lips.

"It's a nice look on you," Jack said, and Red growled even as a noise from the window across the room caused them both to turn and see Big's confused face taking in the scene.

"What the hell is going on here?" Big asked as Red's face flushed a deep scarlet.