The Bad and the Beautiful (MM)

It’s 1955, Las Vegas is swinging, and David Lonergan has the chance of a lifetime when he accompanies his cousin to be the headlining act at the Thunderbird Casino. A pianist who cut his teeth in the jazz clubs of Chicago, David is a dazzled by the lights, the music, and the “anything goes” attitude of Las Vegas. But he’s not knocked off his feet until he meets Vincent “Shorty” Accardo.

Vincent is a full-time bodyguard and sometimes hitman for the mob-controlled casino. He doesn’t indulge his interest in men very often, but there’s something different about David from the moment they meet. He’s attracted to David’s talent, his surprising innocence, and his easy smile.

There are a million reasons to stay away from the young piano player, but Vincent can’t help himself. Even when there are lives at risk ... 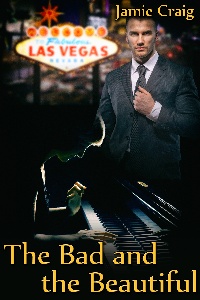 The Bad and the Beautiful (MM)

His dressing room was tiny, barely enough space to navigate around Vince without bumping into him, but David did what he could, grabbing a cup to take into the bathroom and fill with water. When he emerged, Vince had taken off his jacket and hung it on the back of the lone chair. Without it, he suddenly seemed even bigger.

"Sit down." He was glad when Vince complied without arguing. Scooping up a hand towel from the dressing table, he knelt on the floor in front of him, grasping one strong wrist to turn the injury upward. "It all happened so fast," he said, dipping the towel into the water. "Maybe it just hasn't sunk in yet."

"I'm surprised you never ran into anything like this in Chicago. Course, there aren't really any unprotected clubs left for the freelancers to hit." Vince sucked his breath in sharply as David brushed the edge of the wound with the damp towel. "Should have figured he'd have a knife."

The blade had sliced through the dark hair curling along the strong muscle, but the more blood David washed away, the more he saw that it wasn't that deep. "I don't think you're going to need any stitches, but you probably know more about these things than I do." He paused, glancing up to search Vince's face for signs that it hurt worse than it looked. "I'd offer you a drink to help you forget about it, but you'd just turn me down anyway."

"I would, but I appreciate the offer. Maybe later tonight, if it still stings, I'll make an exception."

His heart skipped a beat. He'd never once seen Vince bend his personal credo regarding alcohol, but it wasn't the hint that he might. It was the invitation to offer again after the show, later, when the two of them would invariably be abandoned by Jimmy and Kate. He knew it was foolish to put so much stock in the time they spent together, but the more they did, the richer David's fantasies about the man became.

And the more Vince proved to be a fascinating companion.

His tongue ran over his suddenly dry lips. "Do you know if Jimmy's got plans for us tonight?"

"When he sees I'm injured, he'll probably insist on a quiet night in with Miss Ennis."

"Oh." It was wrong to be disappointed, especially since Vince had already done so much for him. "You'll probably want a quiet night, too, then."

"I could use one. What about you? You haven't had a night to yourself since you got here."

"No, but getting to go out with you after the show has been the best part of moving to Vegas so far." He realized too late what he'd blurted and immediately dropped his gaze, ignoring the rush of heat to his face as he cleaned away more of the blood. Fix it! he scolded himself, but the best he could manage was the feeble joke, "Well, except for having a piano in my suite, of course."

"Nobody said my quiet night had to be spent alone."

His knee jerked, knocking over the water. The earlier invitation hadn't been a mistake. Forgetting the embarrassment of just a moment before, he sat up straighter, intent on Vince again, on the half smile that softened his normally stern mouth. "You'd want me around? Even after you got hurt because of me?"

"I didn't get hurt because of you." Vince grabbed David's hand, his strong fingers holding David in place. "You were a target here, not the guy who pulled the knife."

The heat scalded. Not the rush of his embarrassment, not the blood still staining Vince's skin. Vince, himself. The callused scrape of his fingertips against David's. The power contained in the tight muscles, immutable but hardly threatening. The quiet intensity of his voice as he reiterated David's innocence. David couldn't breathe past the constriction of his chest. He couldn't hear anything but the pounding of his pulse. He tried to swallow down the lump in his throat, but even that failed miserably.

His gaze dropped from Vince's hypnotic eyes to the full swell of his mouth. The overwhelming desire to stretch and taste it had him rising onto his knees, closing the distance until his brain took over and shouted at him to stop.

Even then, all he could do was freeze in that awkward position, kneeling between Vince's legs, their hands joined.