Brock and Brady find the woman of their dreams in a snowstorm. She’s hurt and becomes sick. They nurse her back to health, but she has secrets she won’t reveal. Can they convince her to trust them?

Jeni is on the run from her ex-husband. She fears for the lives of the two men who found her and took her in. Her ex is crazy and has vowed that she belongs to him and only him. Should she run to keep them safe or stay and trust them?

This is a good book I only picked a 4 because I couldn't give it a 4.5
I think it's a very good book, I liked the story, I just wish it was a little bit longer in the length but over all it was a good book..

I look forward to Marla's next book.

4.5 DELIGHTFUL DIVAS: "When Brock and Brady head to town to gather supplies to prepare for an upcoming blizzard they never thought they would be bringing home a woman! Jeni is on the run from her ex-husband. She is terrified to even begin to trust these two cowboys, but she feels something for them both that awakens a part of her that she never thought she could feel again. After being nursed back to health, Jeni begins an erotic journey that teaches her it’s okay to be a little bit naughty. When Jeni’s ex-husband comes back into the scene, these cowboys will do whatever it takes to protect their woman. They just have to convince Jeni to stay with them so that they can both love her. Moreover, they must convince Jeni that they will never hurt her. Trusting Them was a fantastic read filled with lots of twists and turns. Marla Monroe allows all three of the characters to develop naturally and have faults which make them human and come to life on the page. I loved Trusting Them from the very beginning because even though Brock and Brady felt an attraction to Jeni, they didn’t act on their attraction right away. Instead, they took care of her and really showed that even rugged cowboys can take care of the woman they love. Moreover, they proved to Jeni that they would do whatever it took to to convince her to stay. If you like ruggedly handsome cowboys and damsels in distress that get rescued against their better wishes, then Trusting Them is a great addition to any collection!" -- Lily, Dark Diva Reviews

Slowly, she shifted until she knelt on the pillow. Then she bent forward and licked the crown of his cock. He tasted of salty male and heat. She let her tongue dip into the slit and was rewarded with a jerk and a spurt of fluid. She rolled her eyes up to watch his face as she lowered her head over his cock and swallowed him inch by slow inch. His eyes darkened, and his face flushed.

The deep groan across from her had her looking over to find that Brock had his thick cock in his hand and was slowly working it as he watched her sucking on his brother. She met his eyes as she slowly took all of his brother’s deep into her throat. He groaned again and closed his eyes. She smiled around the meat in her mouth knowing she had power over both of them for the moment.

Brady was no longer using the brush on her hair. Instead he had his fingers massaging her scalp as she licked and tongued him up and down from top to bottom. She rolled his balls in her hand, plucking on the thin skin and scratching along their bumpy surface.

“Damn, baby. Your mouth is like liquid heat surrounding me. That’s it. Suck me down.” His raspy voice urged her on.

Mindful of her teeth, she took him to the back of her throat then swallowed down around him. He cursed and jerked on her hair as she came back up. She angled her head so that she could take more of him while watching Brock from the corner of her eye. As she swallowed down his brother, he squeezed his own balls while she scratched against Brady’s. She pulled back and swirled her tongue around Brady’s cock head. He groaned and jerked her hair down to pull her down over his dick once again. She moaned as she went down on him and was rewarded with a jerk of the meat in her mouth. She loved the power she wielded now.

The next thing she knew, Brady had pulled her off his cock and pulled her up onto his lap. The long, thick, wet cock rested nestled between their stomachs. He leaned his head against hers and panted.

“Lift up,” he ground out between clenched teeth.

Jeni lifted up on her knees expecting him to stuff his heated dick between her pussy lips. Instead, he dragged a finger through her slit and worried the nub of her clit with his finger. She bit her lower lip and flung her head back to gather a full breath. He pushed his finger up inside her and swirled it around, making sure she was slick and ready. Her juices had already coated his hand by the time he shifted her and positioned the head of his cock at her slick opening.

When he pulled her down while pressing up at the same time, Jeni screamed, but it was cut off when an even thicker penis was shoved into her mouth over Brady’s shoulder. Brock stood behind the couch with his jeans around his knees and his cock deep in Jeni’s throat. She couldn’t believe how good it felt to be filled from both ends. They seemed to time it so that they both thrust into her at the same time. She felt stuffed and wanted more.

Brady rocked beneath her, grasping her hips and forcing his way in and out of her over and over again. The beginnings of heat raced up her spine into her womb. She reached upwards and found her breasts with her fingers. She pulled and prodded at them as she rode Brady’s cock.

Brock held her head in his hands as he fed her his long thick meat over and over. He leaned over her and whispered nasty nothings in her ear.

“Don’t you like having my dick in your throat, baby? Feel how it fills you up? Just wait until I come down that throat of yours. It’s so fucking tight I can already feel the burn.”

Jeni couldn’t say anything, only moan, which drove Brock even faster shafting in and out of her mouth. Short, shallow thrusts followed by long deep slides in and out of her throat. When he got close, he lost some of his rhythm and began bucking in and out of her. She knew the minute he was about to come when he suddenly went up on tiptoes and curled his hands in her hair.

“Thanks for brushing my hair, guys.” 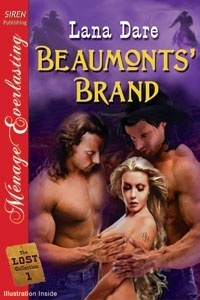