Walk Among Us (MM)

As an artist in NYC, Calvin Shumacher finally has the life he’s always wanted. In fact, only one thing can get him to come back to Illinois -- his father’s funeral. All he wants is to bury his dad and hightail it back to New York, but a sniper at the graveyard puts those plans on indefinite hold.

So does Matthew Soto. The gorgeous gunman who speaks of monsters wearing human faces. And predicts there won’t be a body for police to find.

Calvin doesn’t know what to think when Matthew claims he didn’t do anything wrong. All he knows is that this man’s haunted eyes seem to pierce right into his soul. But as each of Matthew’s assertions comes true, Calvin slowly realizes this killer could be the only thing standing between him and an unspeakable evil ...

Walk Among Us (MM)

Then he saw who sat in the far corner booth. His eyes widened as the sniper from the cemetery bowed over a bowl of soup and blew across its steaming surface.

The harsh fluorescent lighting wasn’t nearly as forgiving as the dusky light from the graveyard. It highlighted every shadow under the man’s eyes, betraying his lack of sleep. It put flesh on bones that could have been a trick of the night, and then made that flesh strain against the V-neck black sweater molded over it. A silver cross nestled in his throat. The irony made Calvin softly snort.

Either he was louder than he thought he was, or the man had super-hearing. He glanced up from his meal and caught Calvin’s eye. Both froze.

Being watched was like getting his clothes peeled off him in strips in the middle of a sauna.

Nobody else was in the diner. Calvin tore his gaze away to look over his shoulder at the parking lot. The bright interior lights turned the plate glass window into a dull mirror, but it was still possible to make out the pickup parked near the doorway. Only one. Not Eli’s.

Maybe Eli was mistaken about Krauss’s lone patron. Because considering the peewee football coach was a murderer felt too much like talk-show territory.

When the lone waitress in the place tried to approach, Calvin grabbed a menu from the counter and slid onto a stool, his back to the window. He didn’t want to turn his back on the sniper. Not that the man still wore the holstered gun he’d had in the cemetery, but he’d have to be an idiot to think he was safe.

The waitress carried a coffeepot to the rear booth, refreshing the sniper’s cup. She smiled and laughed at something he said to her. Nothing about her manner suggested fear or anxiety. If anything, she looked like she might even be flirting with him, though his response was merely polite.

The man met his eyes again once she’d moved off, stirring his spoon absently in his soup. He nodded once, but it wasn’t until he gestured toward the seat opposite him that Calvin recognized the invitation.

Common sense told him to find somewhere else to eat.

Another voice whispered, What’s he going to do to you in such a public place?

As Calvin slid into the booth, the man waved for the waitress again. “Don’t get the vegetable soup,” he warned. “It’s too salty.”

Calvin sat up a little straighter. “Who said I was eating with you?”

“Mostly because I’m not sure you’re not a ghost.”

Ripples floated across the surface of the soup as the man held his spoon in front of his mouth. “A ghost wouldn’t have burned his tongue on his damn dinner.”

The man’s smile threatened to shake Calvin’s resolve. Casting a glance around to make sure they weren’t going to be overheard, he lowered his voice anyway. “Aren’t you afraid of being caught by sticking around here?”

The man took a bite. “Did you tell the police about me?”

“Then why should I be afraid?”

Calvin hesitated. He couldn’t figure out if the guy was cocky or just really stupid. “You really don’t think you’re going to get in trouble for what you did.”

The lines returned where the man’s full mouth turned down. “Ah, now I never said that.”

Marooned with a Marine (MM)
Gordon Phillips
In Shelf
$3.99 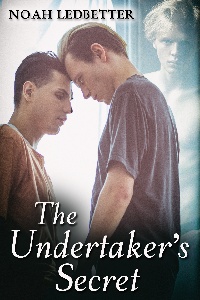 Reap This Too (MM)
Rafe Jadison
In Shelf
$3.99
Tweets by
sirenbookstrand