Damn, but how did he let things lead to this?

Sébastien sensed it was coming and the questions, bit by bit, inched them to this tableau he stood before. But he let Marshall guide him. Why? He knew the answer. Because he wanted him to.

Ready to show Marshall this next tableau on his life, his mind, and his persona, he took a deep breath and said, “No, that isn’t the reason I became a sex doctor. The fact I’m an empath is the primary reason.”

Marshall snorted. “You can read minds. Now that is bullshit!”

Sébastien lifted his index finger in rebuttal. “I didn’t say that. I can’t read minds, but I have a gift of knowing how a person feels or what they are thinking. Not all the time, but it happens often.”

He paused and added, “And I didn’t jump into this, like you’re thinking. It just came to me. People asked me for my opinion and advice in the beginning, and when it worked, a friend suggested I do this as a living. I laughed at that, but when more and more people told me the same thing and that I helped them when no one else including therapists and psychologists could, I decided to try my hand at sex therapy. And from the very beginning, my therapy has been successful.”

He took a breath and continued, “I have a one-hundred-percent success rate because my sensitivity makes me more aware of a person’s feelings, even his sexual ones, than sometimes the person himself is aware of them. Like you.”

Sébastien stopped and waited to see Marshall’s reaction. When he saw Marshall didn’t see where his connotations led, he added, “You still don’t believe me.”

“All right. Let me prove it to you.” He waited until Marshall looked him in the eyes then he continued. “Through the questions you asked me, I saw things in your eyes and your body language you, yourself, didn’t.”

“Yeah, so? Anybody would freak out about that!”

“Yes, but not everyone’s heart rate would increase as much as yours has during this time. And the fact that your breathing is now elevated tells me that you find me attractive in a sexual way.”

“What?” Marshall’s almost empty glass he held fell to the floor. It was a shockproof glass, so it didn’t break. It rolled toward Sébastien instead.

Sébastien leaned forward to pick it up. When he sat back, Marshall got up and paced back and forth. “That is the craziest thing I ever heard!” Not only did his heart rate skyrocket, but his breathing became shallow, Sébastien sensed.

“Why? Do you think a man finding another man sexually attractive disgusting?”

Marshall shook his head frowning. “No, not at all. I’m all for gay people and stuff, but that’s not me!”

Sébastien sighed. “I didn’t say you’re gay. Nor that you want to fuck me. There’s a big difference between finding someone sexually attractive and wanting to make love to the person.”

“You’re damn right there is.” Marshall calmed down and sat once more.

Sébastien stared at him and didn’t speak. He crossed his fingers in his lap.

Marshall’s eyes shifted and his unease screamed to Sébastien. “What?”

“So am I right? Do you find me attractive?”

Marshall didn’t respond, so Sébastien leaned forward and decided to push Marshall’s buttons further. “Food for thought. Would it help if I told you that I find you extremely attractive?”

Marshall’s mouth opened, and his shock sent his heart rate back to frantic. Sébastien grinned and stood. “Our hour is up and I have another client in a few minutes.” He strode to the door and opened it, waiting for Marshall to leave.

Marshall stared at him wide-eyed and stood. He walked over to the door dumbfoundedly and stepped outside. He turned to look at Sébastien, who said, “Would you be free next Thursday evening at seven for another session?”

Marshall nodded. “Yeah, I got nothing planned then.”

Sébastien grinned. “Good then, why don’t you meet me at Alfredo’s on Crescent? Do you know the place?”

“Yeah, but that’s a restaurant.”

Sébastien shrugged. “Yes, it is and a very good Italian restaurant, too. No one said therapy needs to be dull and boring, and always in the office. And since I do work so many hours, it would be fun enjoying your company in a more relaxed and leisurely atmosphere like that. It will ease the tension and make the session less stressing, don’t you think?”

“Um, yeah, I guess.” Marshall’s tone was low and hesitant.

“So then seven o’clock next Thursday it is. See you then. Bye.” Sébastien didn’t wait for Marshall to respond or chicken out of it. He simply closed the door and leaned on the wall, panting. I can’t believe I just did that!

Sébastien honestly did not expect this. Marshall not only accepted both gifts but wanted to be his dom right here, right now.

Mercy, but the man made him lose his breath. His broad shoulders and muscular body sent him to an all-time high alert. And his cock, ah, it was the best he’d ever seen. Plus the dimples, all four of them, the two on his face and the two on his steel-hard ass cheeks had him whimpering, too.

He wanted him to fuck him, fuck him hard and fast, then slow and gentle, then back to hard and fast again. But patience was a virtue best served one step at a time. This young buck needed to be weaned first.

Marshall gazed at him and asked, “So, ah…” He looked at the box, then at Sébastien.

Sébastien said, “Master, I’d like you to tie me, please.”

Marshall nodded, looking at the leather straps and the room, obviously thinking of where to tie him. When he took his hand and pulled him, Sébastien couldn’t help but grin. He brought him to the closed curtains and said, “Lift your hands.”

“Master, you must address me by my position, please.”

“Sorry, slave, lift your hands.” When he lifted his hands in the air, Marshall replied, “Higher still, slave.”

Sébastien lifted them way above his head, and before he could tie him, Sébastien interrupted. “Master, I would prefer to be in the reverse position, my ass facing you, so you may fuck me.”

Marshall didn’t speak, but twirled him around and then tied his wrists to the top of the sturdy curtain rod with the leather straps. “There we go. Does it hurt?”

Sébastien shook his head. “No, master. It feels good.” He sighed. “Master, I’d like to be blindfolded now.”

“Yes, slave, I’d like that, too.” Marshall did his bidding.

Smiling and waiting for Marshall to freak out, he said, “Master, I’d like you to open the curtain.”

“What the fuck?” Marshall’s high-pitched voice revealed his utter shock.

Sébastien laughed. “Master, I want to be seen. I want the satisfaction on my face when you pleasure me to be seen by others. I’m wearing a blindfold, so they won’t know who I am.”

Marshall hesitated, and then Sébastien laughed harder. “Relax, master. Your slave was only kidding.”

Marshall gave him a seductive response. “Um, you’re being a naughty slave.” He slapped his ass with the back of his hand. Then he tugged at his legs. “Slave, spread your legs for me.” Sébastien moved his legs apart. “Slave, bend forward.”

“Yes, master.” Suddenly, Sébastien felt a sting to his left ass cheek, then the hard rubber side of the paddle hit his other cheek. He moaned in pleasure.

Next came the whip. First on his shoulders, then on his back. He groaned. “More, master.”

Marshall whipped his ass cheeks, rubbing and sucking them afterward with his scorching lips. Sébastien’s cock hardened and pre-cum spread on it as his balls jiggled with each whipping. Then he felt something cold, slippery, and slimy slip into his asshole. “Oh,” he grunted with mounting desire as he realized it was a butt plug. But it didn’t remain for long, and he sighed in disappointment when it was removed.

It entered again while Marshall kissed his shoulders and the nape of his neck. And a few seconds later it was gone, Sébastien’s disappointment returning. Marshall repeated this torture and torment on Sébastien several more times until he couldn’t take anymore and he slurred, “Fuck me, master. Fuck me hard.” 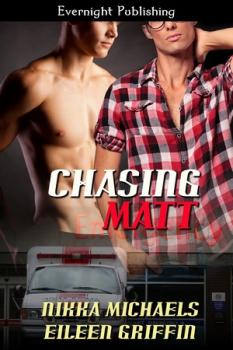